I will start off by explaining that I was never that interested in seeing Dubai. I always saw it as a rather man made, artificial place, but James has it on his ‘to see list’ and due to the bargain of a flight it ended up our starting place!

Our flight landed at 3.30am and we had not booked a hotel for that night. We grabbed a taxi (we researched this and ensured we got a cream one rather than a more expensive black one) which cost around 75 Dirhams (£16). I originally thought we could get a metro but as we arrived on a Friday (Dubai weekends are Friday and Saturday) the metro didn’t run until lunchtime. We got to the hotel (Holiday Inn Safa Park) who offered us to check in immediately (for around £25) or we could check in for free at 9am. We used some time to sit in the air conditioned lobby and work out what to do next, whilst eating up their WiFi.

We decided to walk to the Burj Khalifa to see it during sun rise – this took about 40 minutes. I would have much preferred to chill in the hotel lobby with the air con, but even I would admit this would have been a waste of time! I was sweating within 5 minutes in the 40 degree heat, and apparently this was cool for Dubai. Luckily, you are given light refreshment when walking over the major roads via the metro stations – air conditioning became my best friend!

We got to the Burj Khalifa which is a pretty stunning building – very slim and very tall. It was very quiet around 6am as you can imagine so lots of undisturbed photos (and of course many more for James who needed one from every angle possible). We walked around to the Dubai Mall and saw the fountain in which workers were hard at work cleaning and sewing any breaks in the fountain walkway tarpaulin. By around 7 I was starting to get very cranky – I was exhausted from the trip, sweating from the heat and starving, knowing we had a 40 minute walk back. Eventually James agreed we could head back and we searched for an open supermarket (again due to the weekend, nothing was open until at least 10.30) for water. I will point out we had already walked 6 miles before 8.30am. A 30 minute wait in the lobby – whilst James fetched us a Subway from the petrol station across the road), then to the room for a shower and sleep. 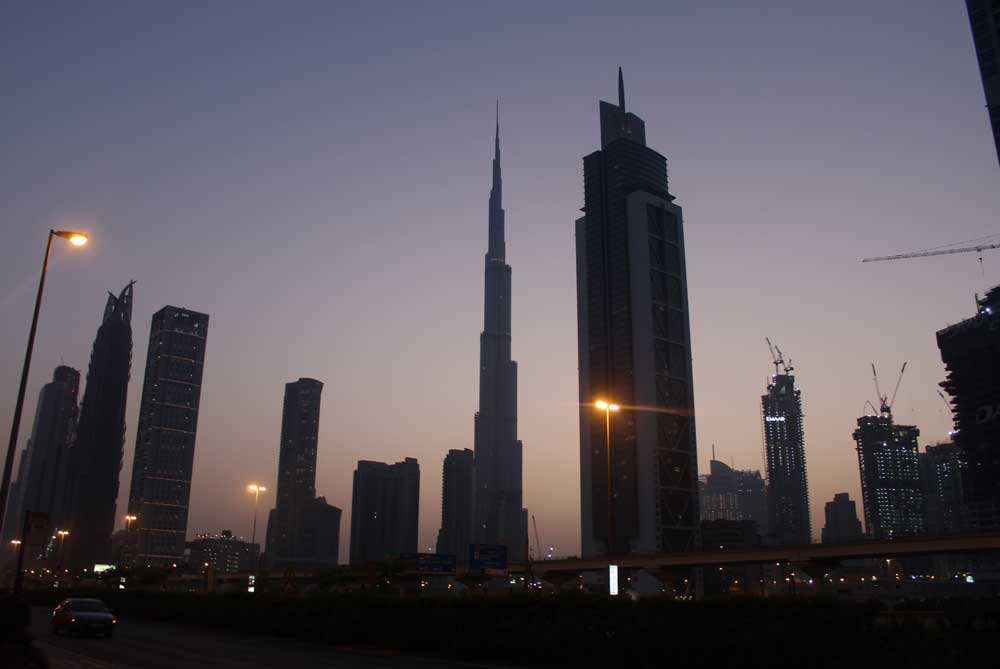 The room was rather luxurious in comparison to the hostels we are to be expecting further in the trip. It was large with a very comfortable bed and air con (of course). I took great pleasure in these things.

After a brief nap to refresh we headed out again. James wanted to see the large photo frame so we jumped on the metro – which is so easy to navigate and really cheap to use (£5 for an all day ticket). The closest stop was still around a 20-30 minute walk to the frame. We walked around the entire park to be told to go to the next gate – we eventually found it and it was £10 to see it up close (you can also go up it), so we didn’t bother. We continued to take photos from the outside. 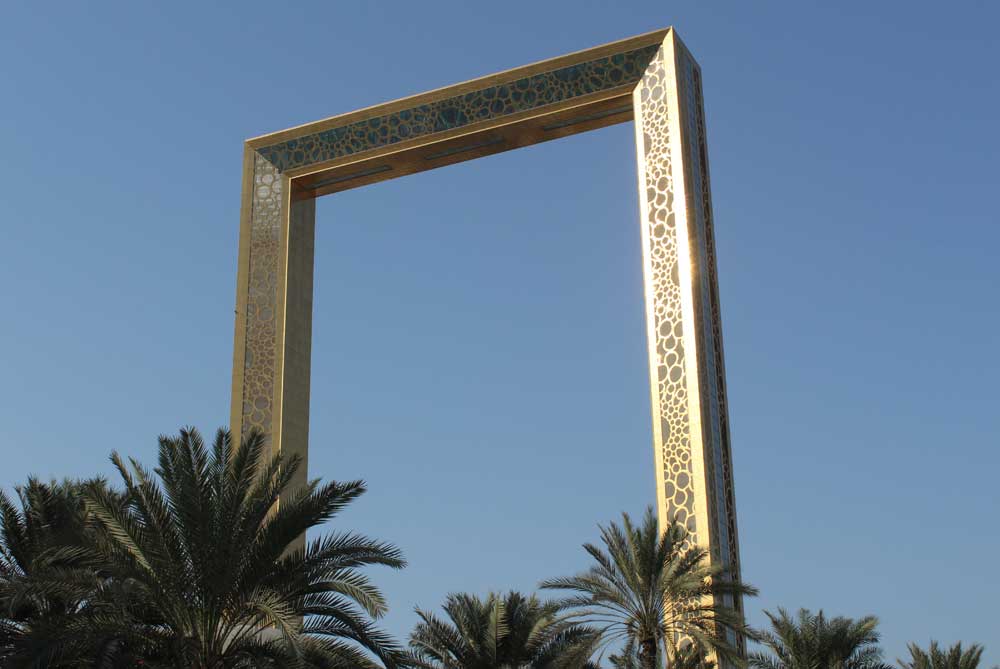 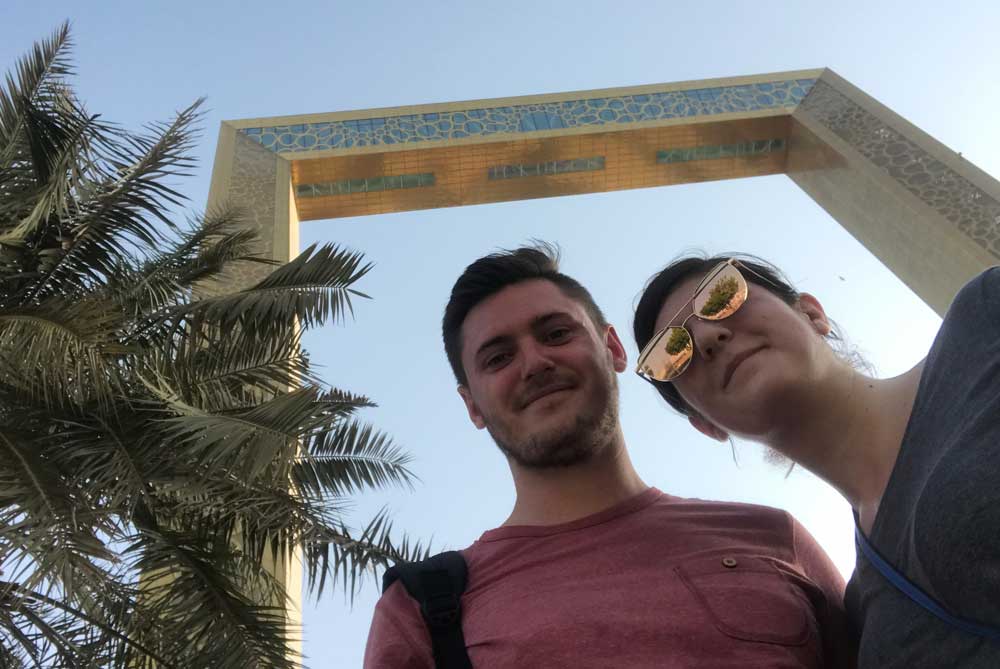 The perfect shot would be to get the skyline in the frame – but this isn’t even close to being possible from close up! It is likely you would need to be a few miles away and in a helicopter! So we took a few silly photos and walked back to the metro (Ah Air Con!)

The Creek in Dubai

James then wanted to continue on the metro to find a small park he had found that overlooks the creek and has a small beach so we logically went to ‘creek’ metro station. Turns out this was completely the wrong one and we had to go back on ourselves! It was again another 20-30 minute walk to reach the park and we needed to pay for a card with credit to get in. It was a sweet park with lots of families having barbeques and playing games. We walked around and found a spot to sit and watch the sunset. 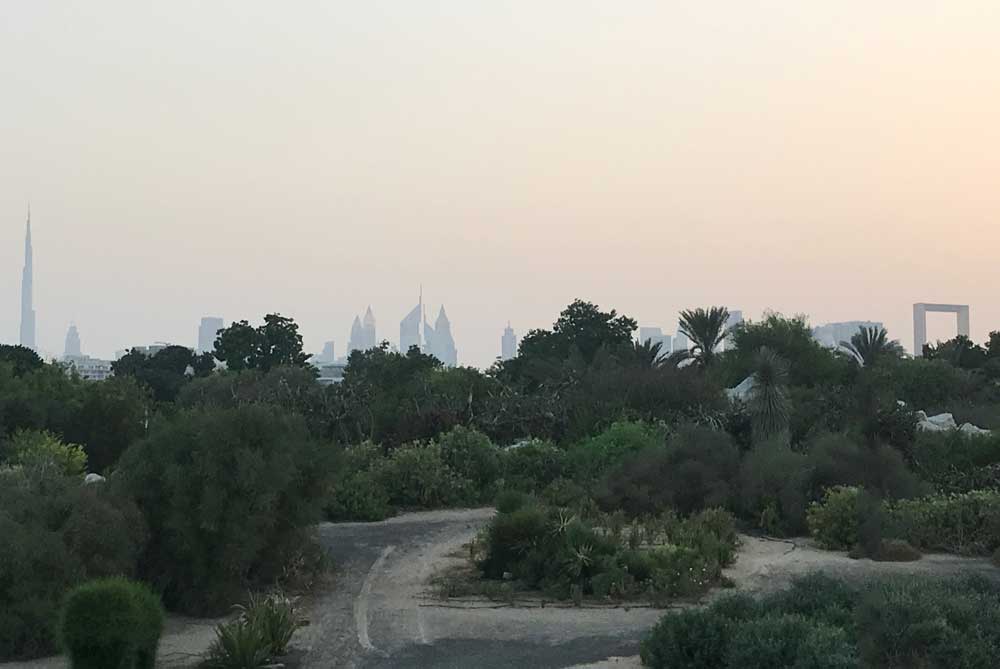 Following this, we decided to work our way back to the mall for something to eat and to watch the water fountain show. We chose fast food due to budget. 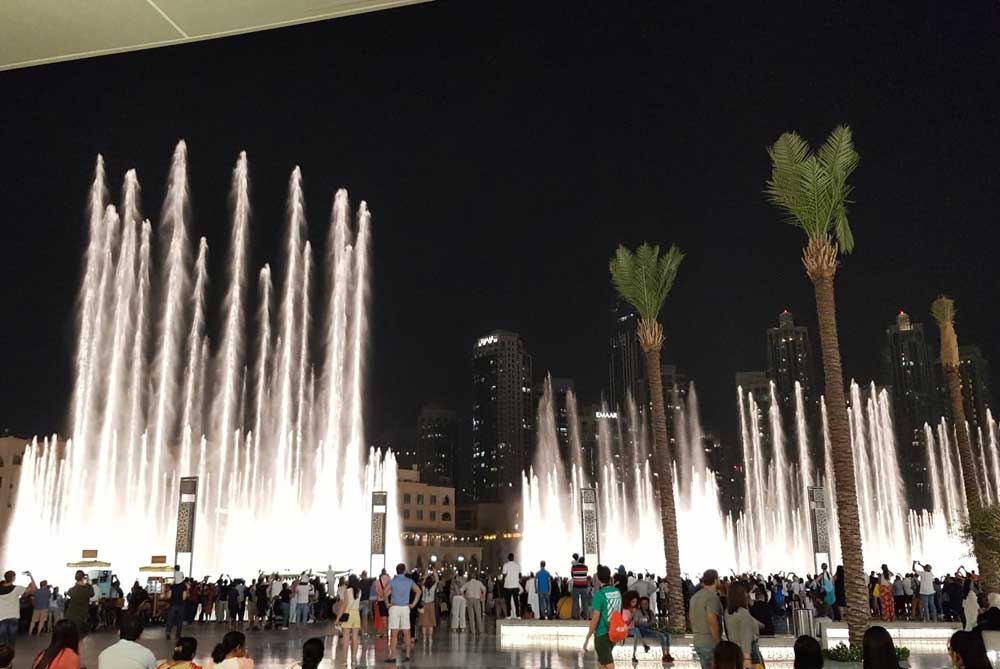 Fast food/takeaway and soft drinks are cheaper in Dubai than in the UK, however to eat in restaurants and hotels including alcoholic drinks is very expensive. Luckily we had free breakfast at our hotel which saved money and had a large selection including healthier options such as fruit!

We used the metro again to go to the Palm Islands. To get there you need to change to a tram and then walk to the monorail. Frustratingly, the monorail was 30 dirhams each and cash only – due to budgeting we hadn’t brought that much cash out with us! We went outside and tried to walk a little along the road leading to the palm (after we had been told its way too far!) but it was the middle of the day and roasting so I refused. James reluctantly accepted this! Turns out its actually really difficult to get a good view of the palm. So, a slightly unsuccessful venture, however James did manage to get a photo of the Burj Al Arab hotel with his 70-300mm lens, don’t ask me what this means. He told me to put it, but the photo does look pretty good… 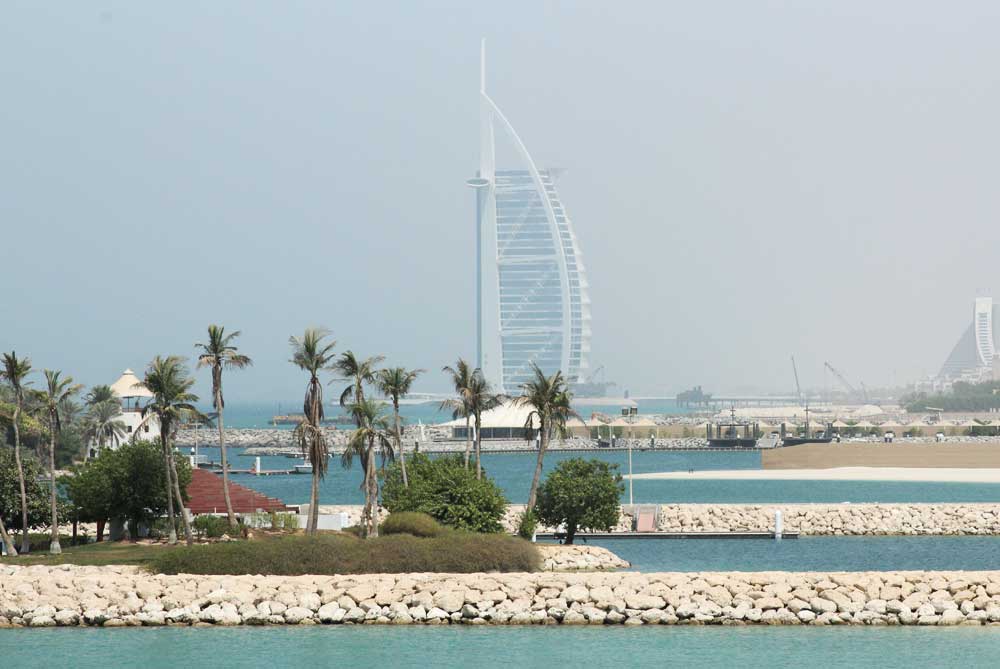 We decided to go to the beach for a few hours, hopped on the tram again to the furthest stop and we were still miles away. Luckily we bumped into 2 Indian guys who were doing the same as us and stated we needed to get a bus and our metro card would be accepted. They even offered to give us advice regarding our next location – India! We were grateful for this information, jumped on the next bus with them and got off at Burj Al Arab. Took a few shots and continued walking another 15-20 mins to the beach. Finally, a little relaxation! 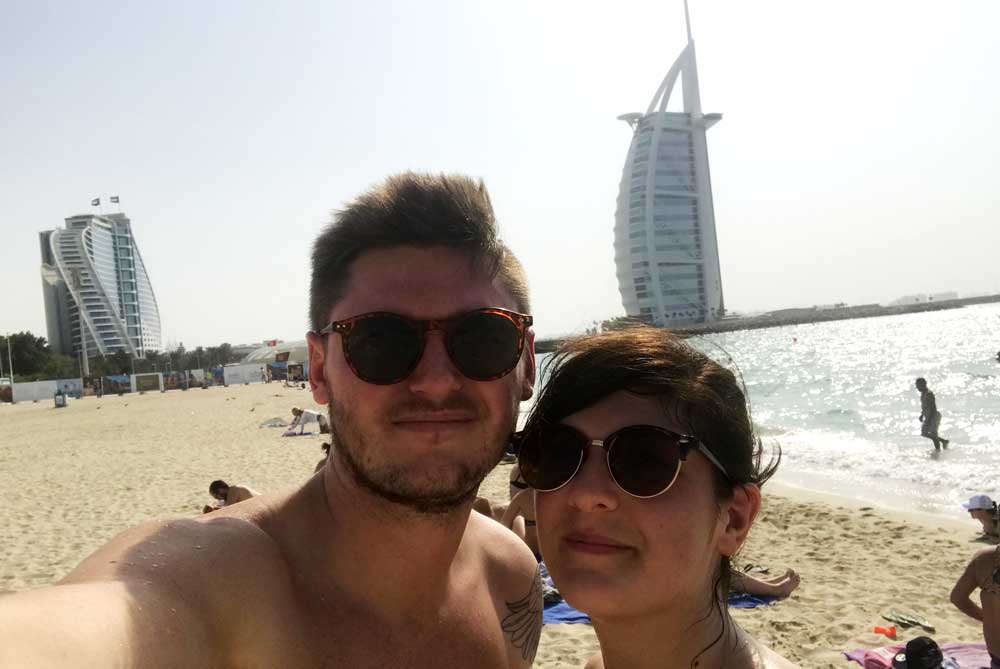 We had a sunbathe, a dip in the sea (which was practically like bath water) with Burj Al Arab as the back drop. And James was faffing about with his new Go Pro, looking a bit ridiculous in all honesty! It was very hot but very breezy, so all in all rather comfortable.

We were lucky enough to meet up briefly with some friends on the beach that have recently moved to Dubai. After a catch up with them and a commemorative photo, we got a taxi back to their flat and walked to the nearest metro (trying to cross incredibly busy roads in the process – James has a video of this one). We ordered on Deliveroo to the hotel when we got back – so cheap and easy!

On our last day in Dubai James had booked up 2 activities for this day which was making me anxious as I knew we would be out all day. We started at The Dubai Mall to find the attractions we had missed such as the waterfall and the giant aquarium including mantaray’s and sharks. To be honest the Dubai Mall is quite a spectacle, even if you aren’t shopping! 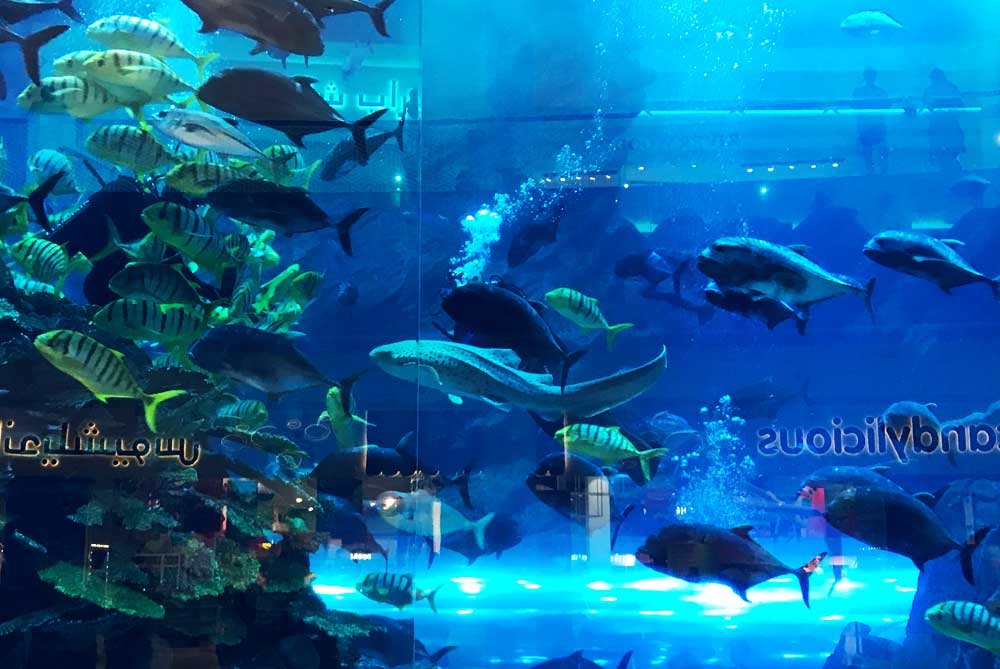 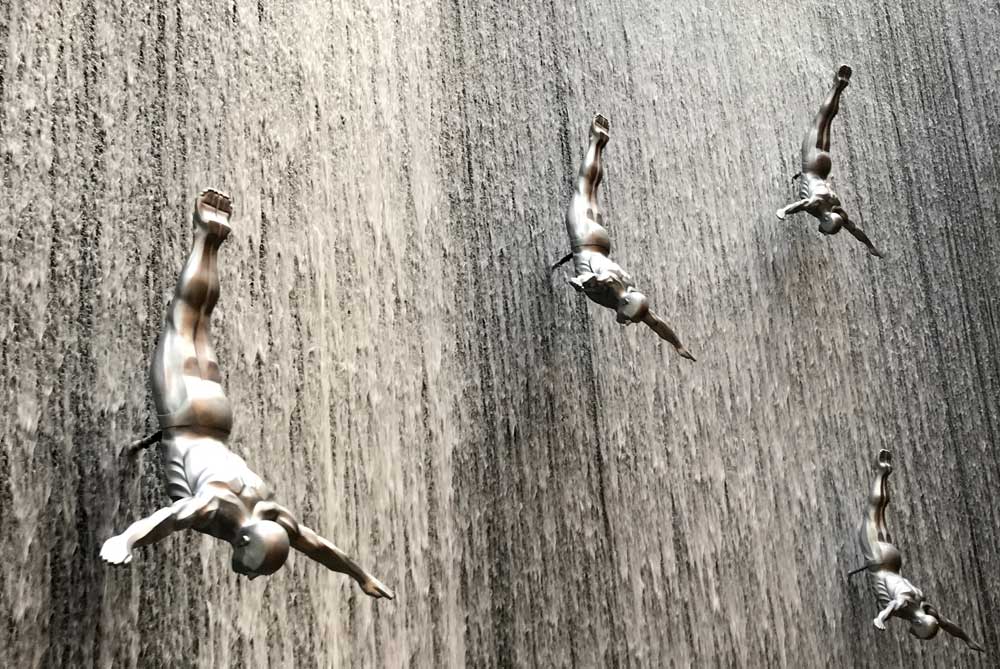 Burj Khalifa at The Top

At 12pm we had booked ‘at the top’ Burj Khalifa to see the observation deck at level 124 and 125 (456 meters high) via the quickest elevator in the world – it made your ears pop! It wasn’t actually as high as I expected but gave lots of views of the buildings in Dubai and the World Islands – unfortunately you couldn’t see the palm! 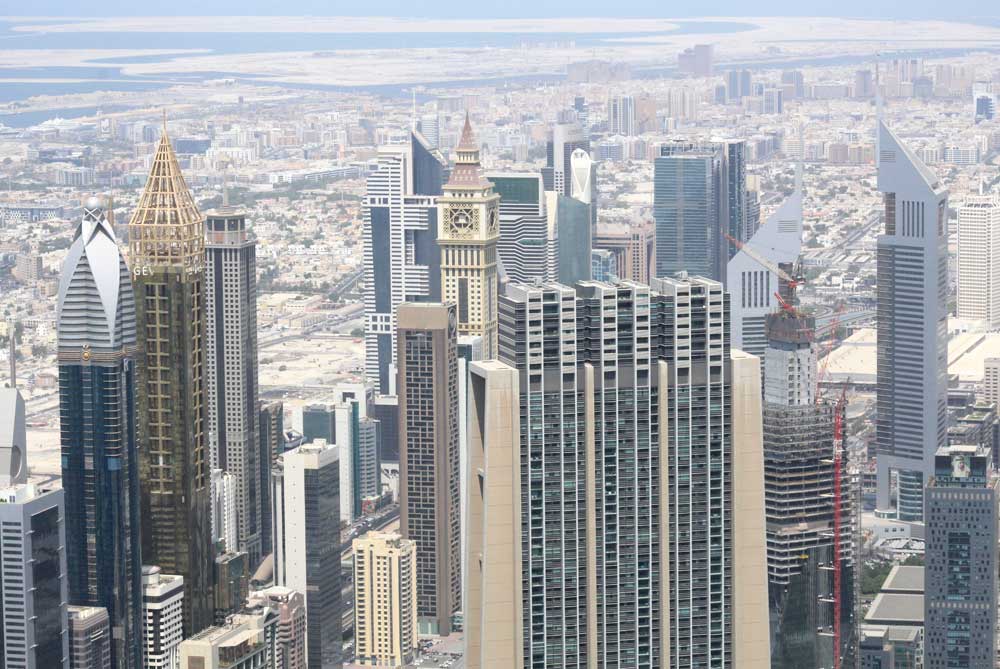 You were able to take your time and had no rush. At £30 each it was over our budget but James convinced me it needed to be done. 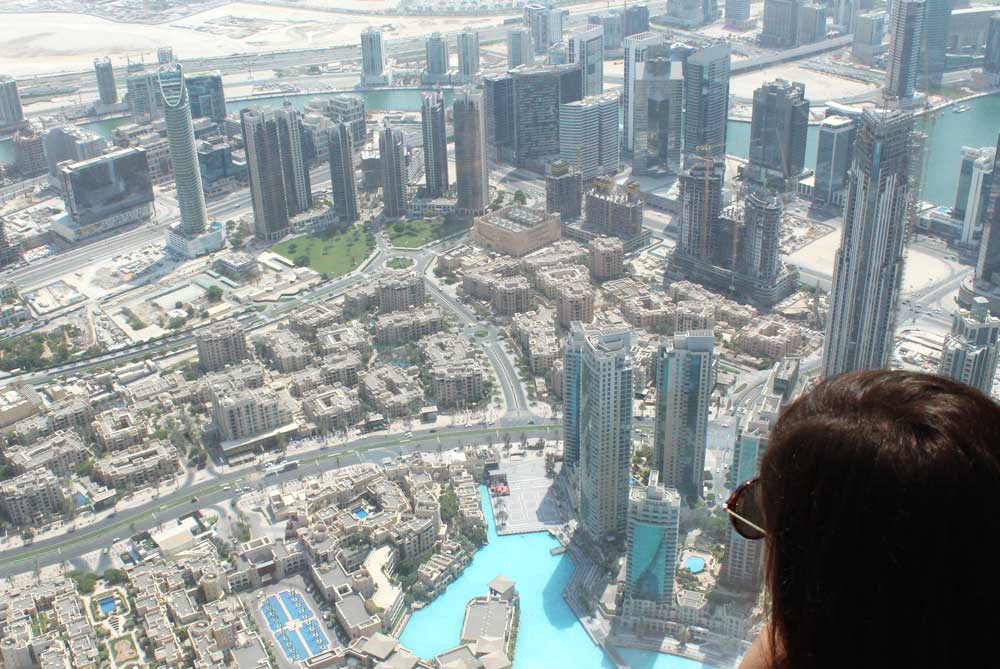 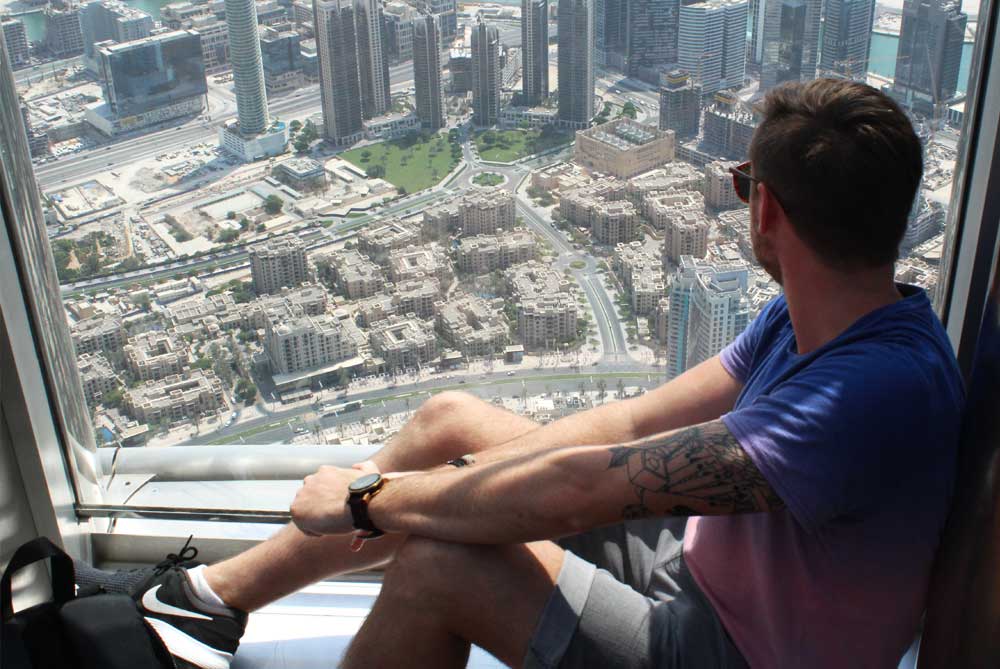 Following this we needed to make our way to our pick up point – this meant getting the metro again and finding a supermarket. We were going on a Desert Safari! Again, James’ choice. He had found a groupon deal for 60% off so only cost around £15 each. I had done something similar in the past so wasn’t really interested but James was so excited I couldn’t let him down.

It started off a little rough – it took 2 hours to reach the destination and then we were left standing around in the middle of a desert off a main road for about 20 minutes seeming as though there was no land rover for us! Luckily, one eventually turned up and took us sand dune bashing! This was a lot of (scary) fun but really not for the faint hearted.

For those of you that don’t know what it is (I didn’t) it is a land rover cruising full speed over peaks and troughs of sand – it feels as though the driver could lose control at any minute. We stopped off at a photo point during the sunset and were taken to the camp. 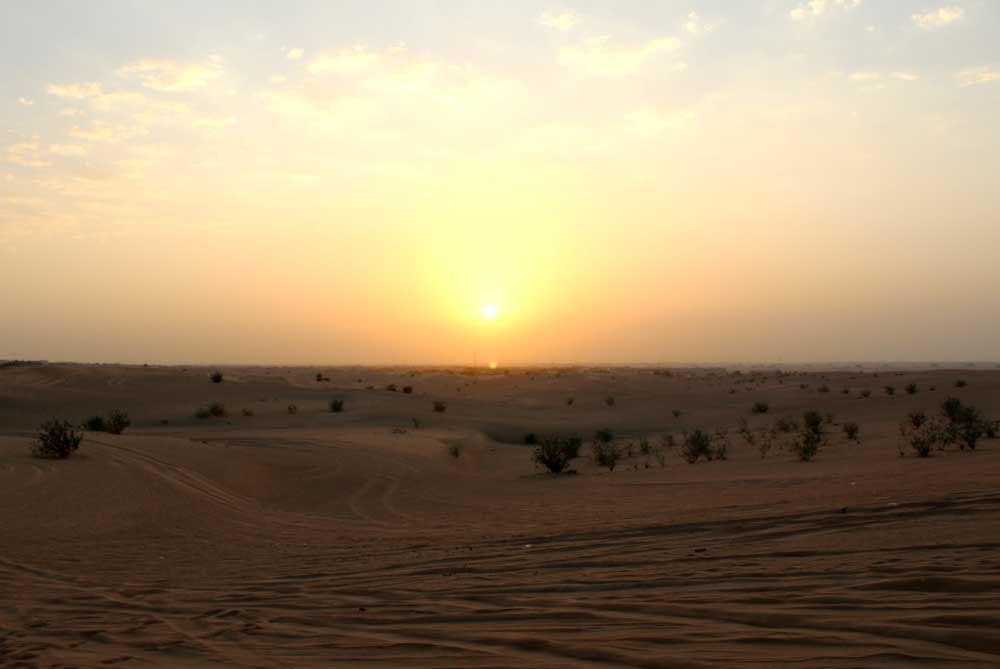 It was very sweet with tables and cushions on the floor around a stage. There were toilets (a big relief to me – you don’t think of desert and immediately think of toilets do you?) You had the opportunity to have a camel ride, a henna tattoo, smoke shisha and play dress up in traditional clothing all for free (photos were taken for you to purchase if you wanted).

There were other small shops also such as a carpet stall. Soft drinks were free and a BBQ buffet was provided. The entertainment was fantastic – dancers performed traditional dances including belly dancing and what I would describe as spin dancing (you will have to see this one to understand!) and even a fire breather/dancer to complete the evening.

We were taken back to the bus via land rover again (another little sand dune sesh) and it only took 45 minutes to get back. All in all a fun experience.

I was exhausted by the time we were dropped off and got on the metro again (around 10pm). I got off at Business Bay to walk back to the hotel and James decided to stay on to see the Marina – the only part he felt he missed. He had to rush to fit this in and brought back some beautiful photos but I was glad I headed back. 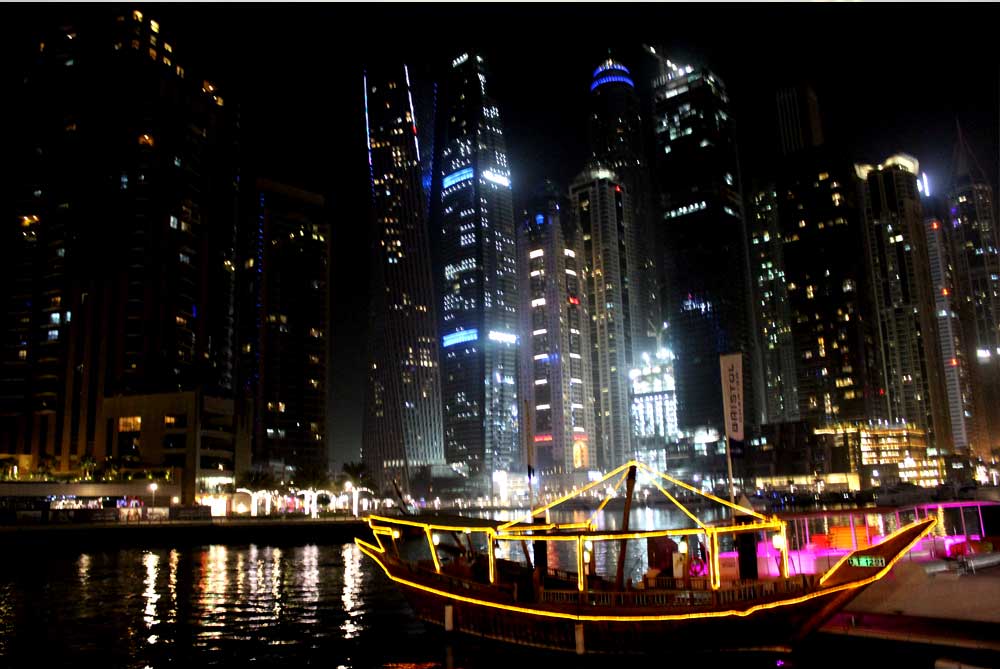 We had a relaxing next morning as check out wasn’t until 12 (another Bonus of Holiday inn) and got a taxi to the airport for out next adventure!

I am glad I experience Dubai as there are a lot of incredible buildings and modern areas. However, I still didn’t get too much of an atmosphere from the place. I think James would be happy to go back in 10 years time to see how it has developed where as I am happy to say I have seen it now!

James put together a 1 minute clip of our adventure, you can watch it here…