I was really looking forward to Chiang Mai as I hadn’t been to the north of Thailand as yet. I wanted to see the difference from Bangkok and the Islands I had visited before.

We grabbed a pre-paid taxi from the airport to the hostel for 150 baht and arrived in about 20 minutes. We couldn’t check in straight away so chilled in the reception area with a hot chocolate and banana (free for guests), and listened to the soothing music playing for the massage room adjoining the hostel.

The owner of the hostel was so friendly and helpful. We were even offered homemade banana in coconut milk on one evening! When our room was available, we dropped our bags and headed out for a quick explore.

The hostel boasts modern facilities and is very spacious. It has it’s own large flat screen TV with Netflix (perfect for those hangover days, ask James about that one!) and it even has a rooftop terrace with large speaker system, allowing us to play our songs one evening with a few of our new friends over beers.

The only little niggle was that the room was described as private, but the top of the wall was missing, meaning you could hear conversations (noises) from adjoining rooms. That, and you’re on constant guard that someone might jump over!

Places to visit in Chiang Mai

We walked roughly 2 miles to this temple passing similar smaller temples along the way. You could easily get lost wandering around the streets of Chiang Mai in and out of temples!

Wat Chedi Luang was one of the larger complexes that included a traditional Thai looking temple building, a Chinese or Japanese inspired temple and a large stone temple all housing Buddha statues. 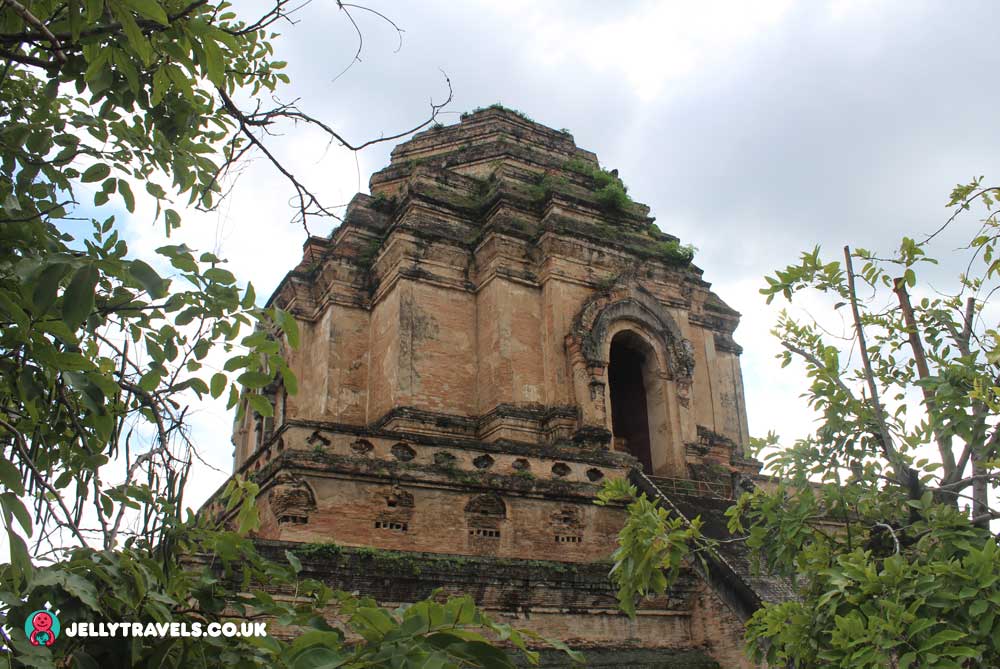 The City Pillar was a building that only allowed entry to men! I read that the reason for women not being allowed to enter was due to menstruation which humiliates and ruins the sanctity of the pillar! I was not amused! But rules are rules I suppose! At least I saw James’ pictures after he was all smug about going in without me!

We walked just a little further to see Wat Phan Tao, another large Buddhist temple – but as I mentioned, you keep walking you are bound to find many more! (James will explain in a little while)

Another temple complex that was on the to do list. We walked around 2 miles to reach this one.

Fairly similar to the previous temple complex with multiple temples and a large gold pagoda. James said he didn’t feel this one was special but still pleasant to walk around and see. 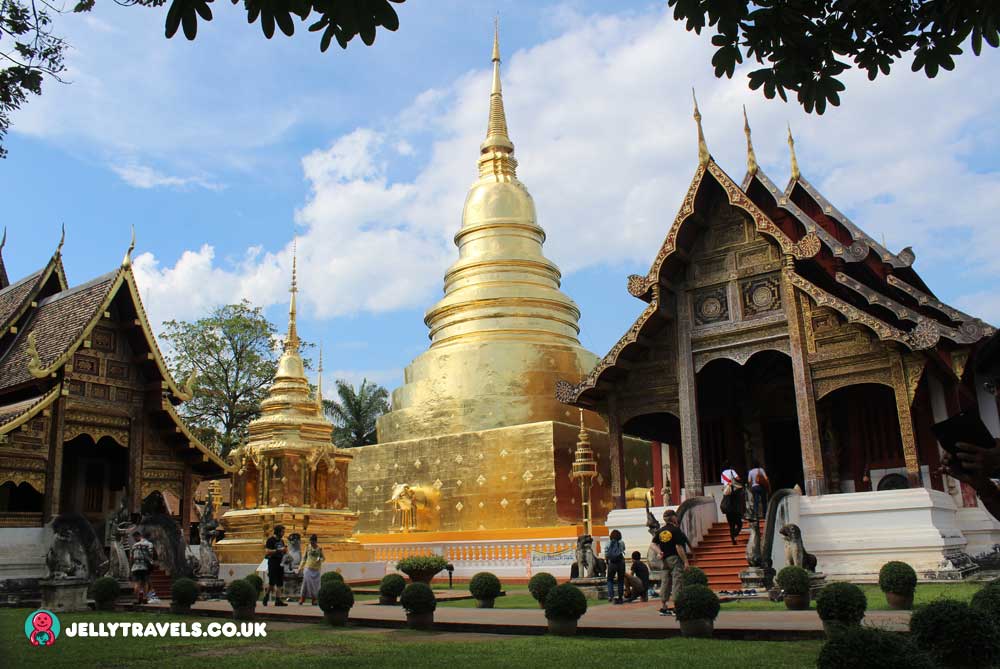 We paid 20 baht in the main temple, but you can actually walk around the complex for free. The main temple was quite interesting, as it contained very realistic wax works of monks. At one point I thought they were real, and James tried his best at convincing me so!

We read the cheapest way to get to this temple was via songthaew – a red bus/taxi that can hold 8 people.

There were a few positioned outside the temple but we were told unless we wanted to hire it privately for 600 baht, we would have to wait for it to fill up to pay 100 baht each. After 10 minutes, another couple joined us and we negotiated with the driver to complete the returned trip for 500 baht (125 each).

It was a 40-minute journey up mountainous areas, and the driver waited an hour for us to explore Doi Suthep temple.

This temple was worth the journey for the views alone – it had numerous viewpoints overlooking the entire city. James was getting the most out of his ‘telescopic’ lens! 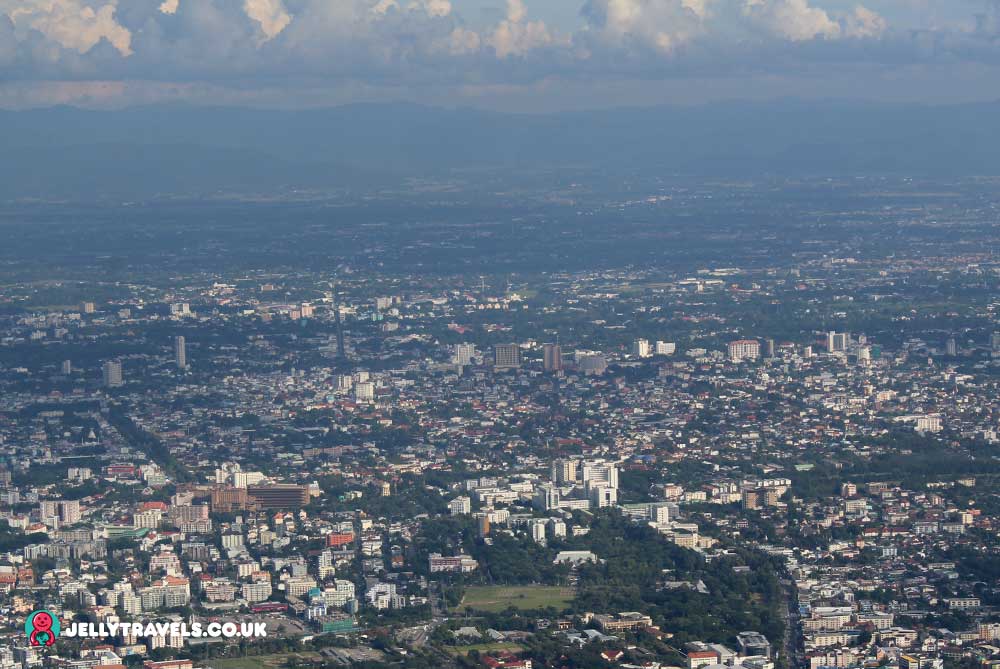 The grounds were pretty with numerous decorations and the main event was the large golden pagoda in the centre with 4 golden umbrellas and numerous Buddha statues. It was really stunning to see! 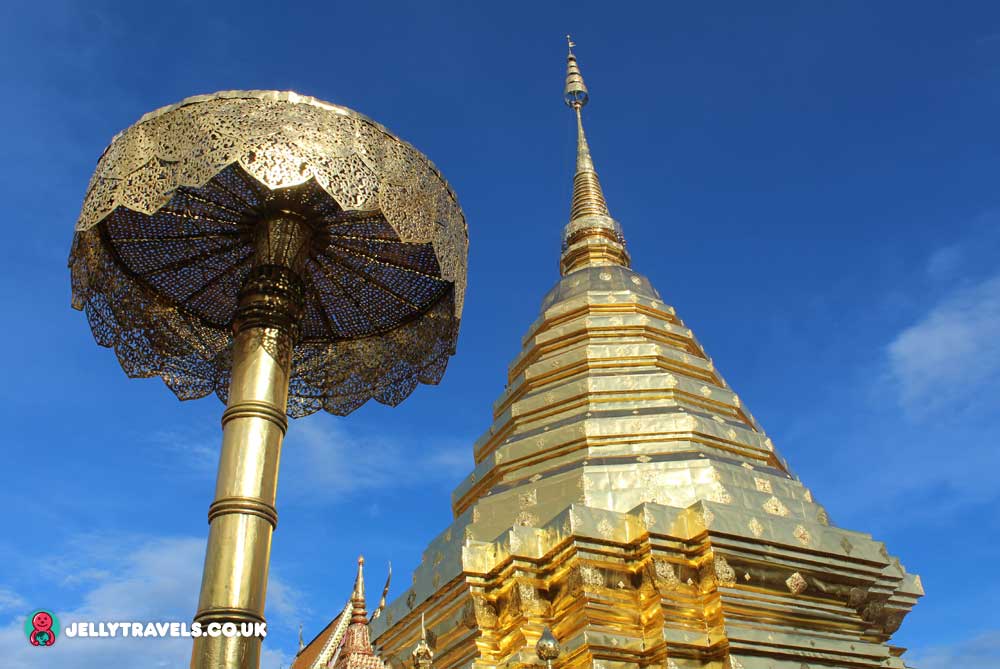 You can do this as a half day trip and see Bhubing palace also, but it was quite pricy so I was glad we did it ourselves. Plus the Bhubing Palace photos online didn’t really strike us.

We were up early for a day trip to the national park. It cost around £30 each for the tour including lunch and entrance fees.

It took around 2 hours to reach the first stop which was Wachirathan Waterfall. It was beautiful – 80ft high of falling water that created a rainbow due to the sun shining! We were lucky as it got a little overcast for the next arrival of tourists and the rainbow disappeared. 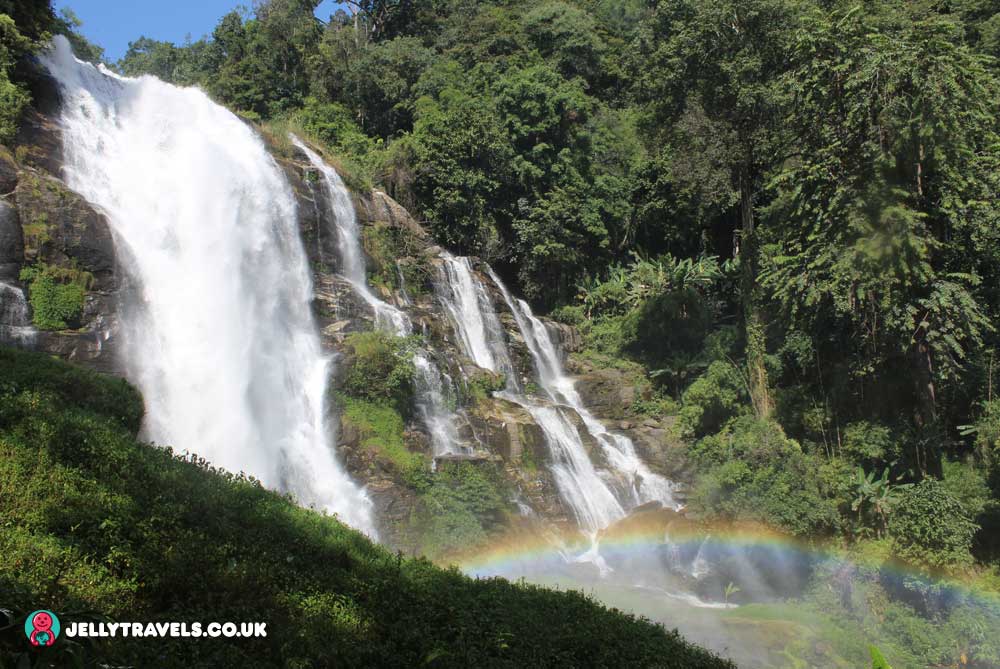 I do like a waterfall. We had about 30 minutes here before we needed to move on!

We were taken to a small village which is famous for coffee beans and scarf making (takes 3 days to make one apparently) but counted about 5 local residents! 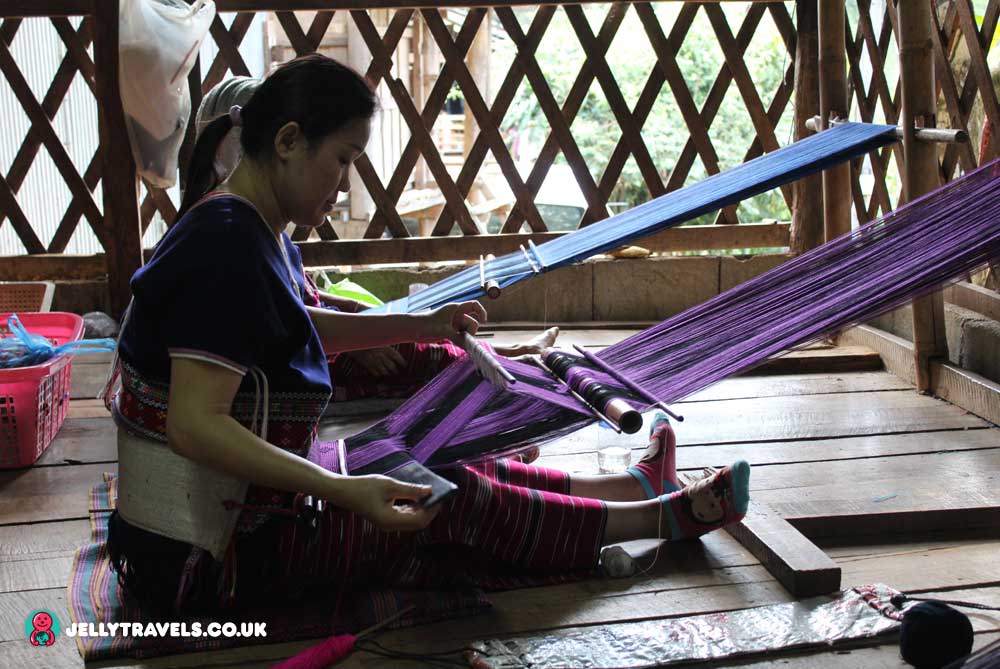 We were shown a rice terrace but due to the time of year, no growth. Lots of puppies made up for it though! It seemed a shame that this very small village had very obviously become a place where tourists were in and out all day. 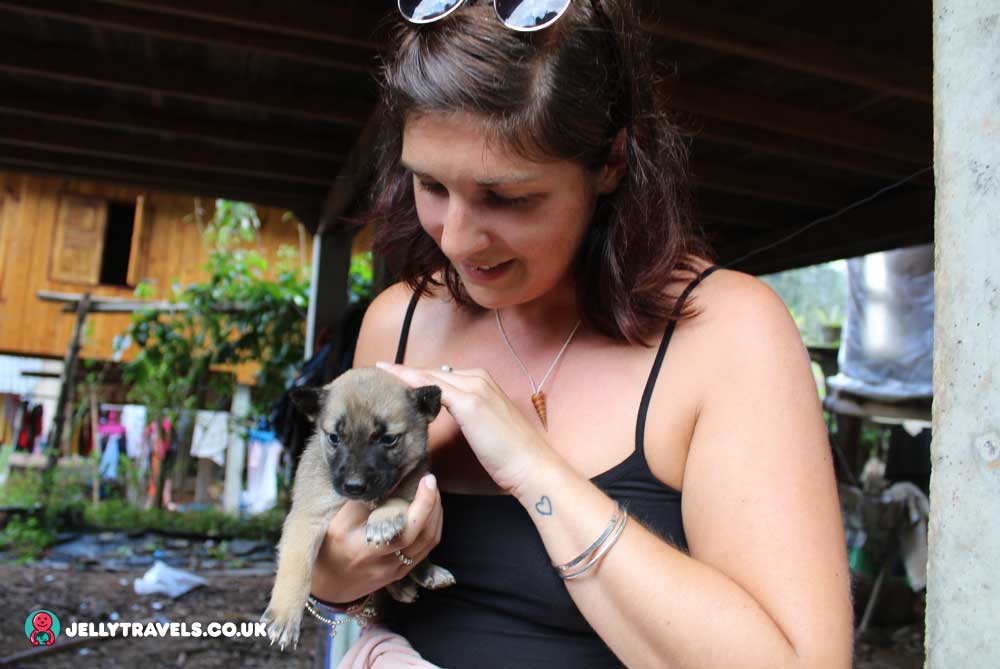 Another waterfall followed but at 40ft was not as special as the first, so just a quick stop for photos. 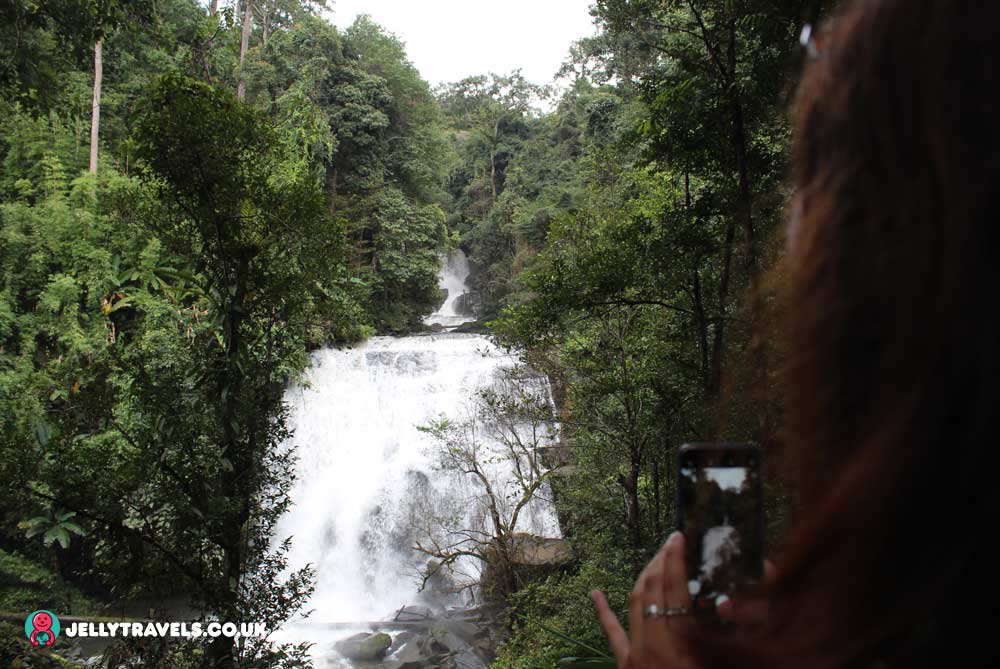 The trip also included a small nature walk through a patch of ‘hairy tree’ rainforest, a small market selling dried fruits and nuts, and to the highest point in Thailand. 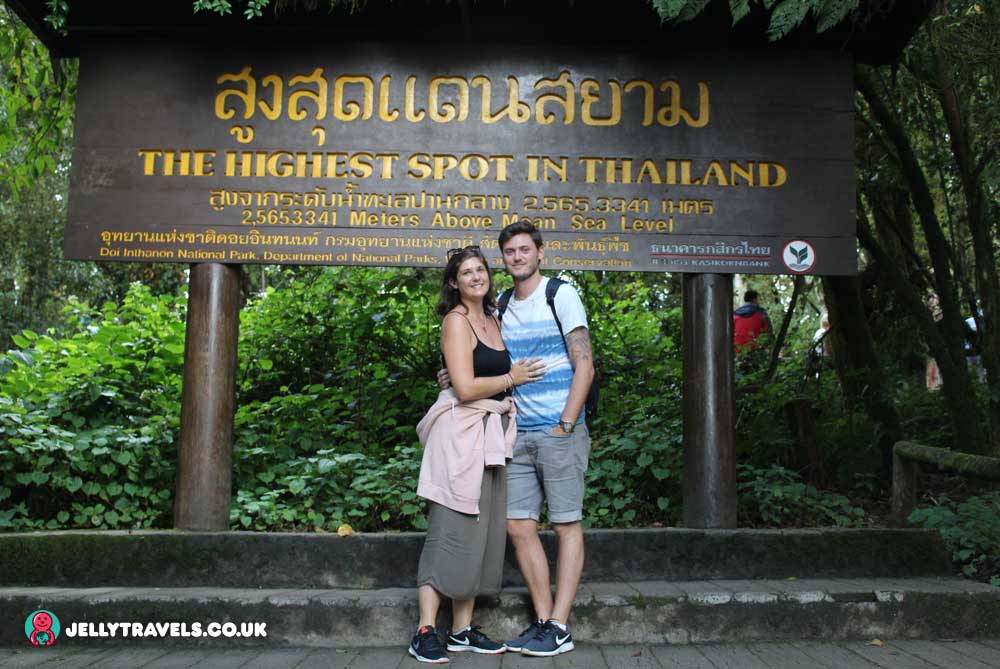 The star of the show was the Royal Twin Pagodas also known as Phra Mahathat Naphamathanidon. Situated high up, they offered beautiful green views for miles surrounded by gorgeous gardens. The Pagodas themselves were majestic and colourful with peaceful interiors housing a Buddha. Lots of photos taken on bridges, benches and with scenic backgrounds! 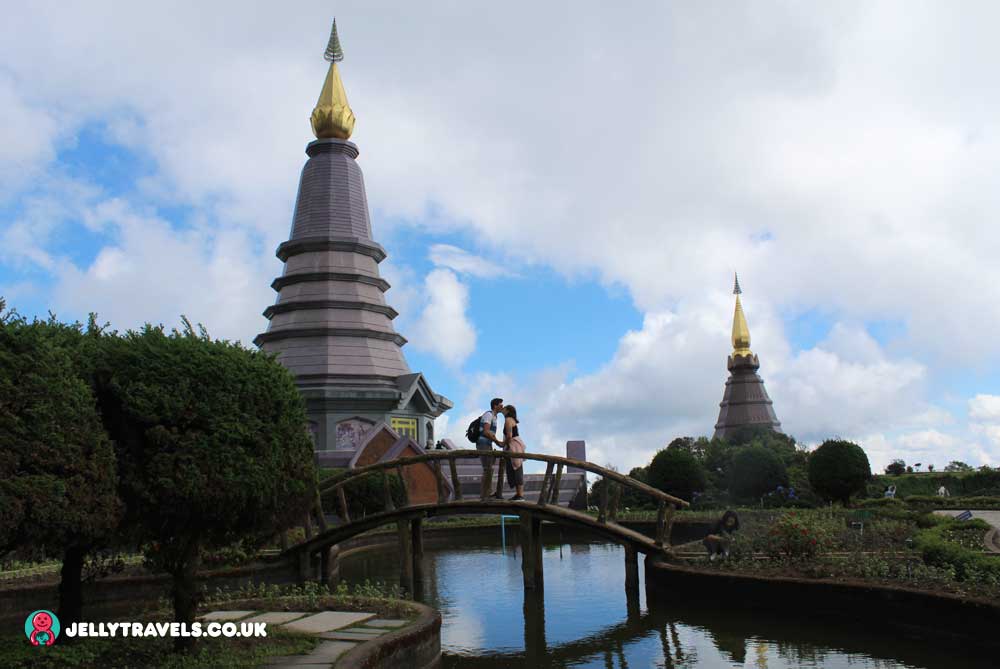 The trip was worthwhile with lush surroundings all day but felt a little rushed at times, however, with the size of the park it would be difficult to see it alone. You could potentially hire a moped (or cycle but you would have to be an athlete) but It was nice to see all the stops with a bit of information from the tour guide. Shop around for prices – we found ours online at click2gothailand.com

It is quite difficult to work out where the market starts/ends in Chiang Mai! I am not even convinced we saw it all!

Stalls line the streets selling souvenirs, lamps, clothes and all sorts. There is a lot of street food and snacks and other indoor deviations with further stalls, bars and restaurants! There are lights, music and excitement! 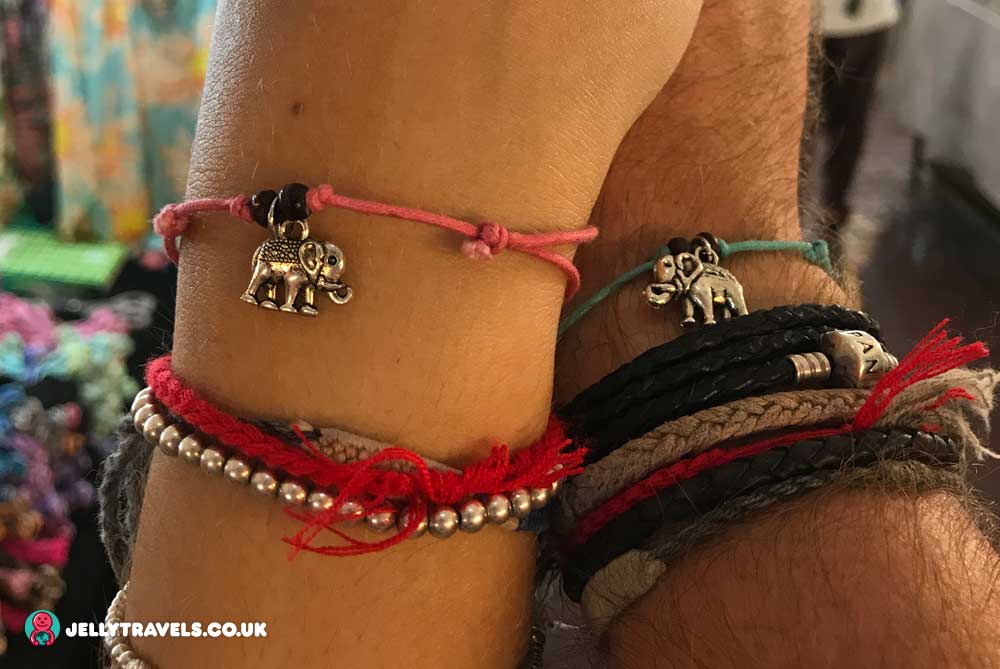 We did a cute couple thing and bought matching elephant bracelets as a reminder of Thailand (which James bartered for of course!). Definitely recommend the night market one evening for food, shopping or just general mooching to soak up the atmosphere!

Where to eat in Chiang Mai

We found this garden restaurant close to our hostel during our first venture of Chiang Mai and decided to have our first dinner here and take advantage of their Tuesday ‘burger madness’ deal of beef burger, chips and salad for 119 baht.

Massive portion sizes and just what we fancied (after spending the last few weeks eating culturally)! We ended up coming here 2 more times for their special deals – after eating Thai food during the day (just to justify)! Definitely recommended if you fancy a bit of ‘home comfort’ food for a great price.

One thing really noticeable about Chiang Mai is the number of restaurants and bars around – you are absolutely spoilt for choice, whether you want a bear or a meal. Its actually rather comforting! Not that there is any reduction in street food either! However, the whole demeanor of Chiang Mai is much more relaxing in comparison to the City of Bangkok. I really like it!

Chiang Mai felt like a really quaint city even though it was bustling and full of life. Plenty of bars and restaurants but also plenty of hotels and tourists! It is somewhere I would happily come back to visit, but for now, onto Chiang Rai for James’ birthday!

Ok, so I felt I had to butt in on this one, as Chiang Mai was possibly my favourite place in Thailand. The food, nightlife, sights and vibe were second to none. As Kelly sat in relaxing with Netflix/sleeping I took Chiang Mai a little further one night…

Things to do in Chiang Mai within 1 hour…

I arrived here around 5pm and thought ‘ooo, this is nice, no tourists’. After snapping away for about 5 minutes I noticed that one of the several dogs scattered around the complex was edging closer to me.

Before I knew it, I was being chased by all of the several dogs who were barking at this point and stopped once I got a few metres from the exit. The locals in the garage opposite found it funny, but I wasn’t risking a dog bite!

Another beautiful temple in Thai style, at around 5.15pm free from tourists. Snap away!

Again, free from tourists I viewed the outside of this temple. With it’s large buddha statue and intricately detailed architecture it was quite stunning. 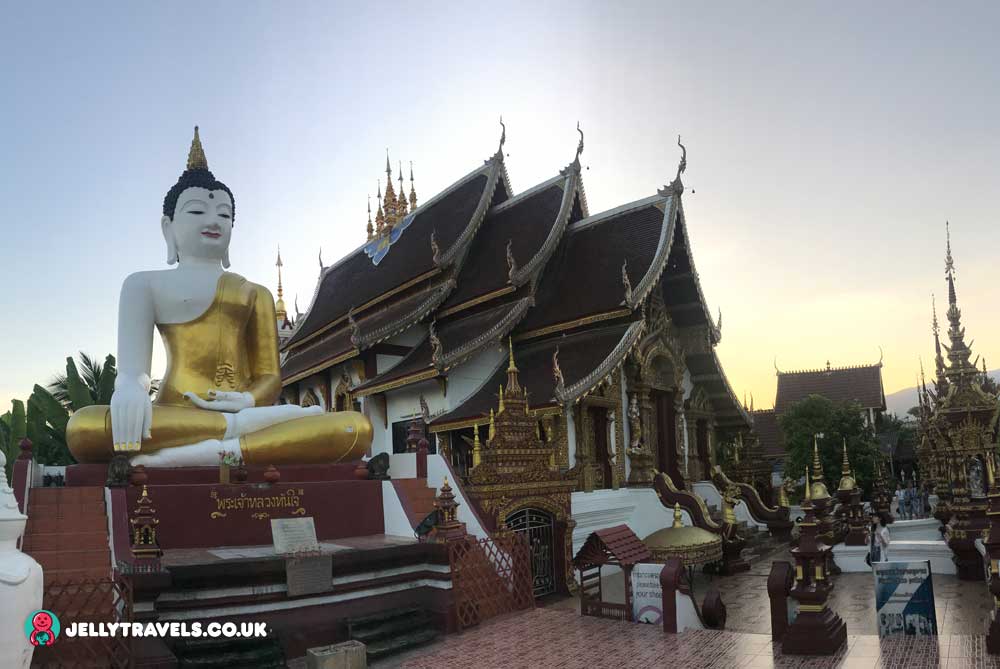 Yep, another temple, as Kel mentions, there are so many! The temple grounds were decorated with banners and hosted a community feel with monks charming the gong.

It was dark when I visited this temple, so the photo doesn’t really do it any justice. However the light shining off the gold decorative temple was quite the picture!

Situated outside of Chang Pueak market – you can’t miss it, it’s the busiest street restaurant in Chiang Mai!

As well as visiting a few more temples, it was the main reason I walked 2 miles to the north end of Chiang Mai, and I was not disappointed!

I ordered my ‘large’ plate of Khao Kha Moo which is pork leg on rice and egg. I then ordered my second plate. And probably could have easily ordered a third – it was absolutely delicious. And I’m gutted that Kel missed out. 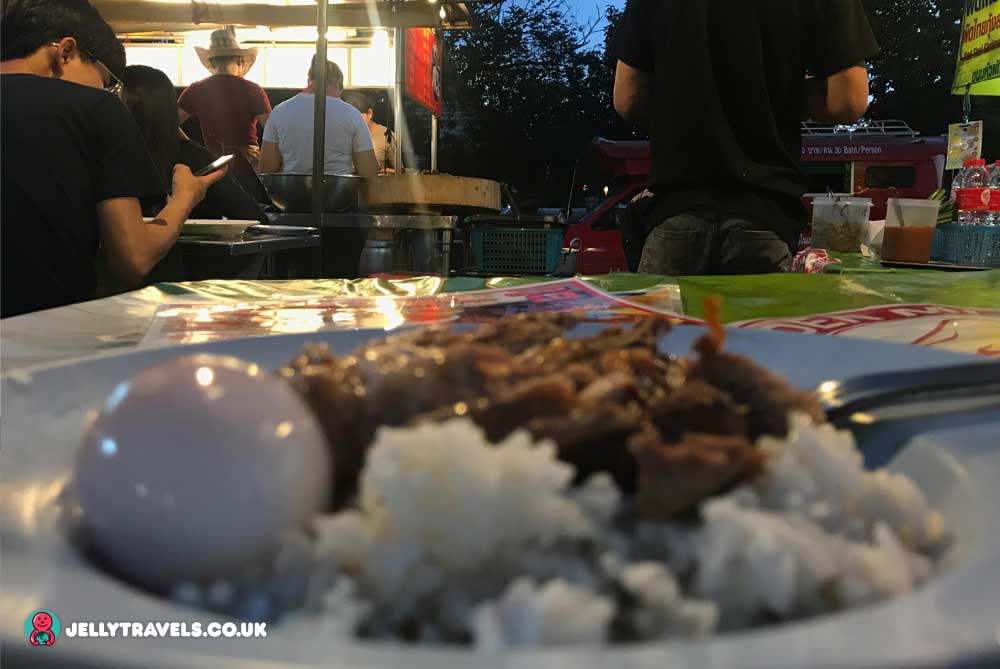 The food was hot, came out quick, was accompanied by sides/sauce and the place was obviously a popular spot for locals/tourists alike – definitely recommend!

This was like our own intimate gig – with only around 30 seats, this makeshift bar on the rooftop near the market, was perfect for spending a few hours in the evening. And Kel enjoyed in too – sometimes a difficult task with nightlife! The music definetely played a huge part to this!

Unfortunately Kel couldn’t be convinced for an even later night. So I ventured out with a friend from the hostel and partied until 5.30am!

The clubs were very dirty, I came back with black feet! And you pay an entrance fee of 100 baht for each, where you are given your first drink for free. They were lively and crammed clubs, but the vibe was good and the music had lyrics. I managed to wangle free drinks from some thai girls (traveller budget and all that!) and everyone seemed very friendly.