We visited Bologna between 19th-20th August 2018 after a visit to Florence.

From Florence to Bologna by Train

We booked our train ticket in advance from www.trainline.eu and paid €9 each for this journey from Florence to Bologna. It was suppose to take 1 hour and 20 minutes, however it arrived 15 minutes early somehow, oh I love the Italian train service!

Where to stay in Bologna

We stayed at a place called Hotel Holiday, which we purchased through Expedia at £43 for the night for the two of us. Walking from the train station it took us about 20 minutes, but in 30 degrees heat 20 minutes can sometimes feel like 40! On arrival to the hotel we kind of wondered what we had booked up, as it was located down a small alley with tons of graffiti. Later did we realise, that Bologna is full of graffiti! 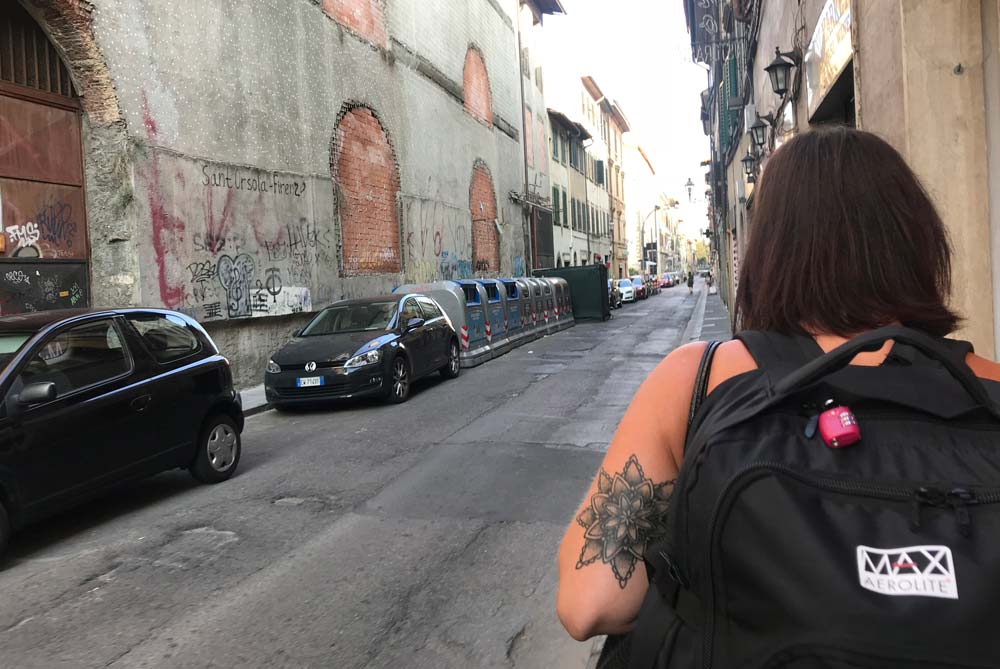 Soon as we entered the hotel, we were greeted by air conditioning and an accommodating receptionist. Check in was 2pm and it was only 10.30am, so they allowed us to leave our bags so we could explore. Whilst leaving our bags we noticed an individual booking a room on the day and was about to pay €65, so it is well worth booking in advance! Plus the hotel was very busy. 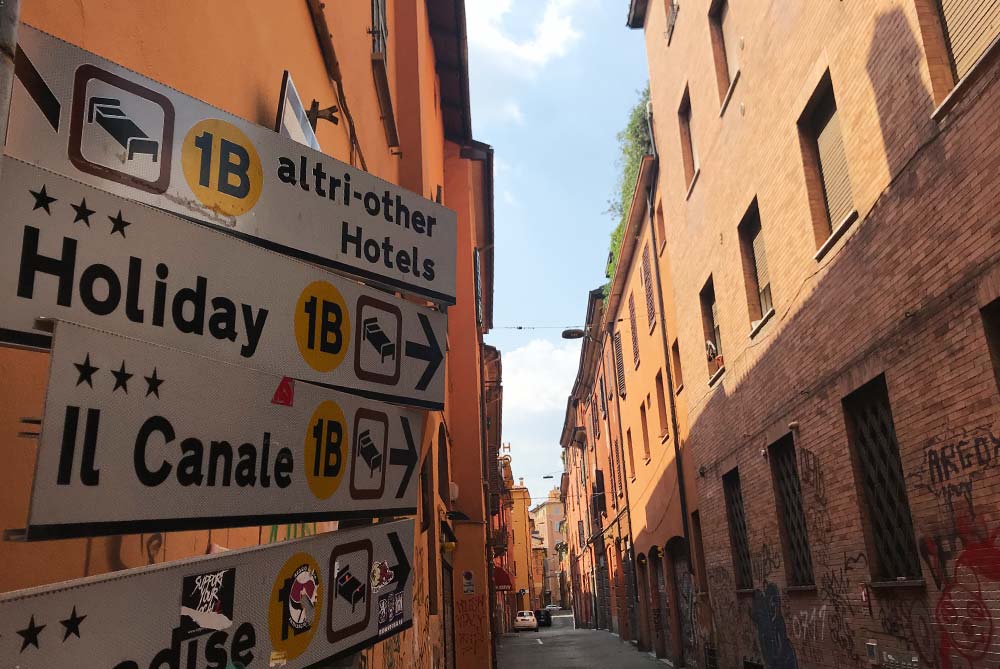 The room itself had everything you would need (TV, kettle, fridge, air conditioning) and was very modern. My favourite part was actually the shower, which had 3 jets, yes 3! Kelly’s favourite part was finding a music channel on the TV (although to her disappointment it wasn’t Radio Bruno). It got to a point on our trip where this would be the first thing she’d check!

Things to see in Bologna

The Piazza was the first area we came to on our explore of Bologna and it cannot be missed. We arrived at this area around 11.30am and it was fairly busy. We came across the Fountain of Neptune statue first, which was pretty cool and gave me photo opportunities on several occasions. It’s not my fault we kept passing it! Also, there is a free water fountain right underneath, so fill up your water bottles! 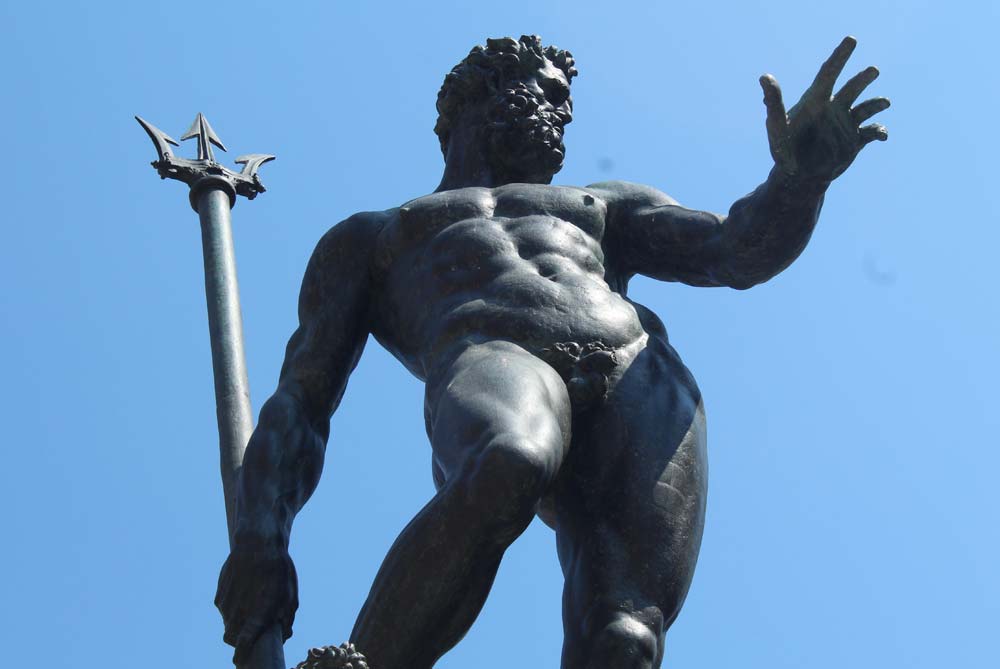 Just off the Piazza there is an area called Palazzo Comunale which we walked through. It was from here when we started finding medieval references and even a flintstone like seating area! There were then gardens with decking, which is a great environment for studying/relaxing in. 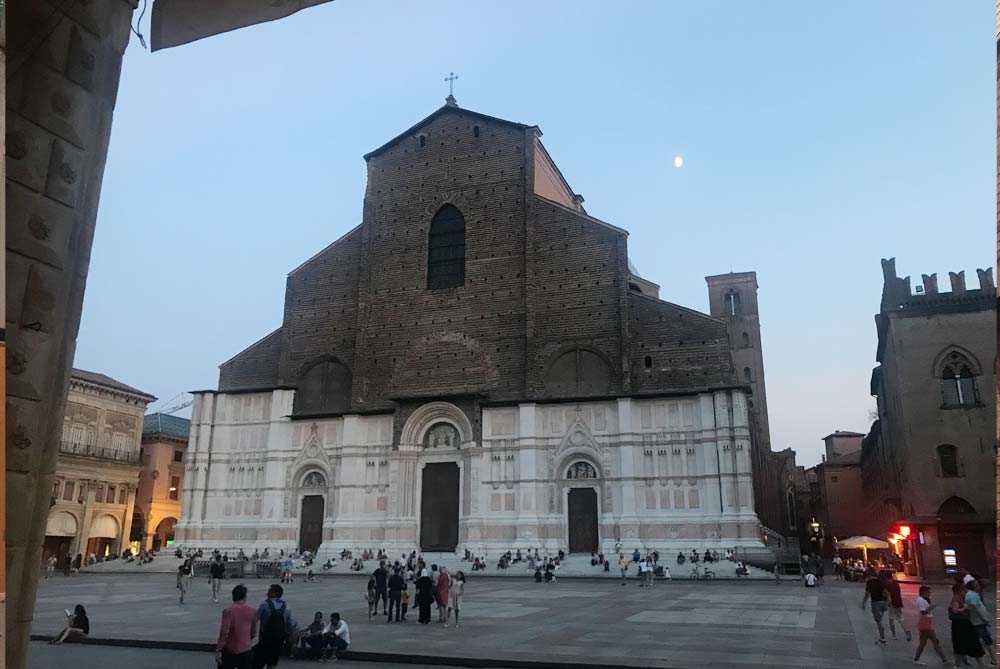 Located in the Piazza Maggiore, this church is a must see on your visit to Bologna and is free to visit. Me and Kelly walked around the outside of it and were absolutely amazed by it’s size. It’s certainly a lot bigger than Duomo Cathedral in Florence that we visited. We were surprised that we didn’t have to queue at all, but I think this is why I fell in love with Bologna. It became obvious that it wasn’t a tourist trap. Compared to the hour wait for a church visit it Florence, this was such a relief.

I didn’t think much of the Basilica’s exterior, apart from the size, but I have to say the inside is breathtaking! There is so much to take in and the ceiling and walls are beautifully detailed with intricate decoration. I’ve never seen so many individual chapels inside a church before, I think I counted around 20, each with their own praying area and a donation box. My favourite was one of the first chapels on the left which was completely covered in gold plating. There is a museum toward the back left if you have some time to spare.

You aren’t allowed to take photos inside, but you can pay €3 and get a wristband to take as many as you like. My frustration grew as I witnessed so many people taking photos without the wristband, also the amount of noise was so disrespectful. If you go, please respect the church. In terms of clothing I wore shorts and a t-shirt, Kelly wore trousers and a shawl to cover her shoulders. There is a security guard at the door.

These towers are the icon of Bologna, and you will start seeing them on everything tourist related. They are nothing pretty, just two worn medieval structures which are a few hundred years old. The smaller tower looks like it is falling over and tilts towards the large tower. I found out that there was once a bridge connecting the two, which was quite impressive. 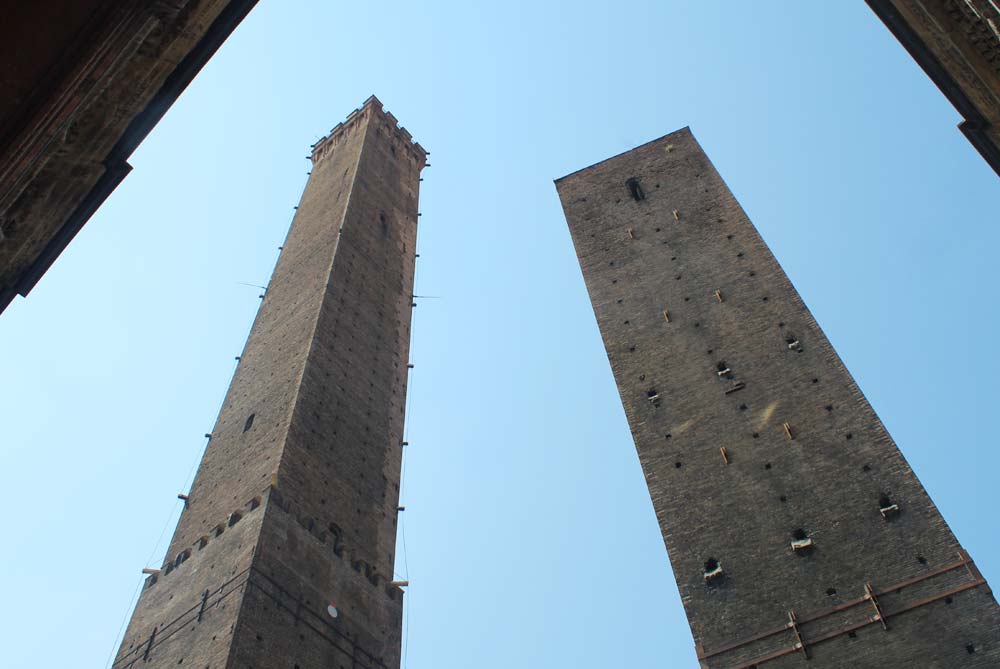 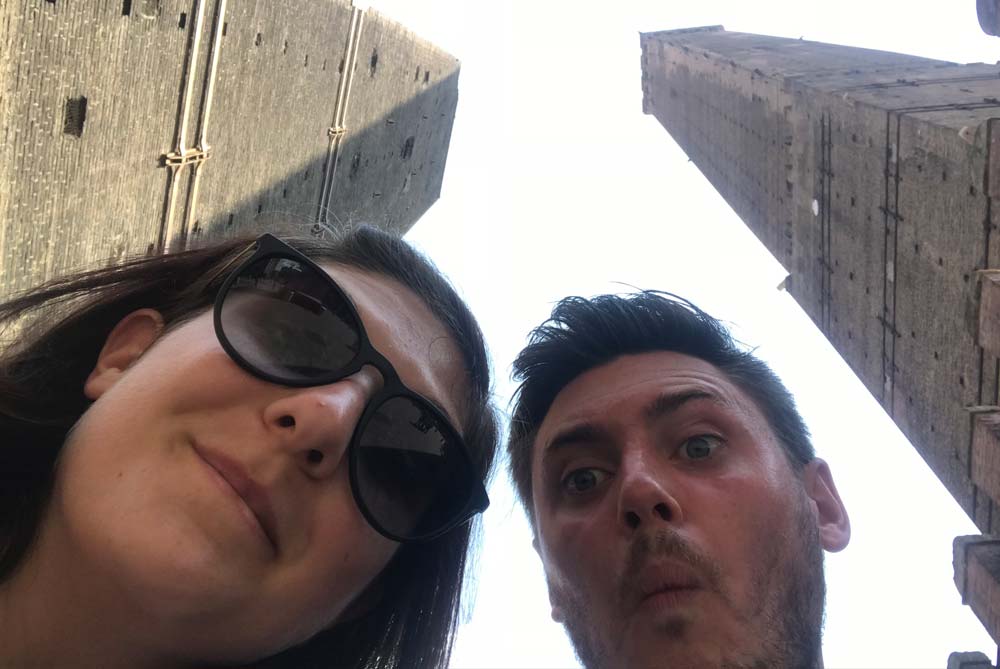 Being the landmark of Bologna, the tower is something I had to climb, and climb it I did! I got my ticket from the tourist office in Piazza Maggiore and it cost only €5 which is a bargain when you compare it to climbing the Leaning Tower in Pisa (€18). I booked up a slot for 2 hours later, as they run every 45 minutes.

Leaving Kelly to watch pasta being made and spend her €5 on an Aperol Spritz at the bottom of the towers I walked over to the 30 person queue for the Asinelli Tower climb. There were a mix of tourists including a family with a baby, which surprised me, but the baby was allowed. Getting to the top of the tower was tough in 30 degree heat for me, let alone the baby. There were also so many photo opportunities, so I lagged behind the group. As I got to the top of the wooden steps, people were starting to come down. At the top the view was absolutely stunning and so worth the money. 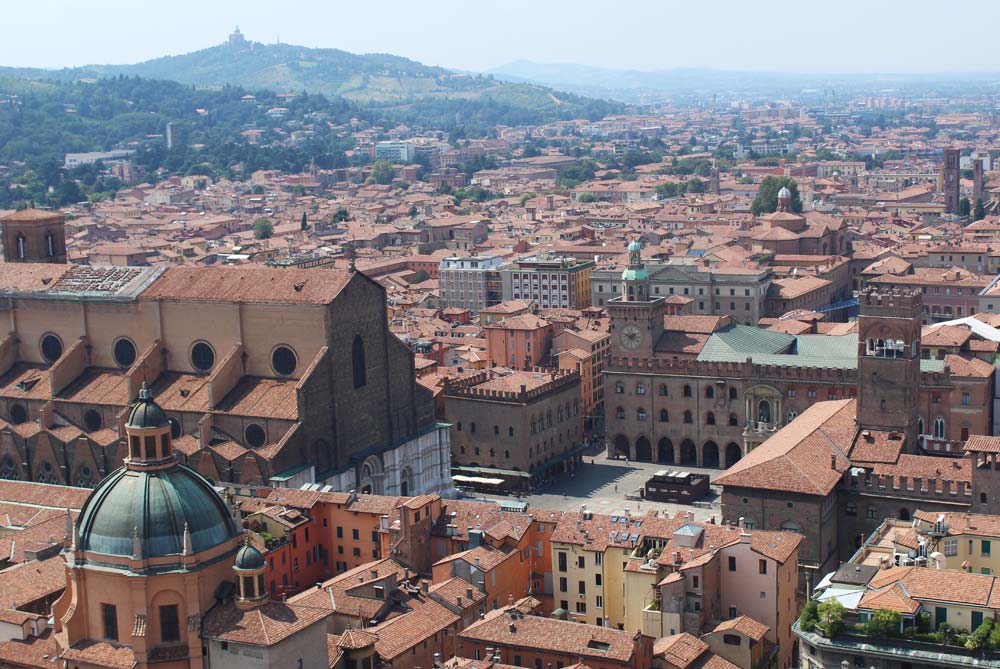 You look over the mass of terracotta buildings, with mountains in the backdrop. It also gives you a great view of Piazza Maggiore with the clock tower. Inside the tower itself there are round holes in the floor to take photos through, which are great for capturing the crooked square spiral of the staircases. Don’t drop your camera! There are also little windows in the brick to glance across the rooftops of Bologna. It was such a great experience! The whole experience lasted 45 minutes for me. 20 minutes walking, 25 minutes taking photos. 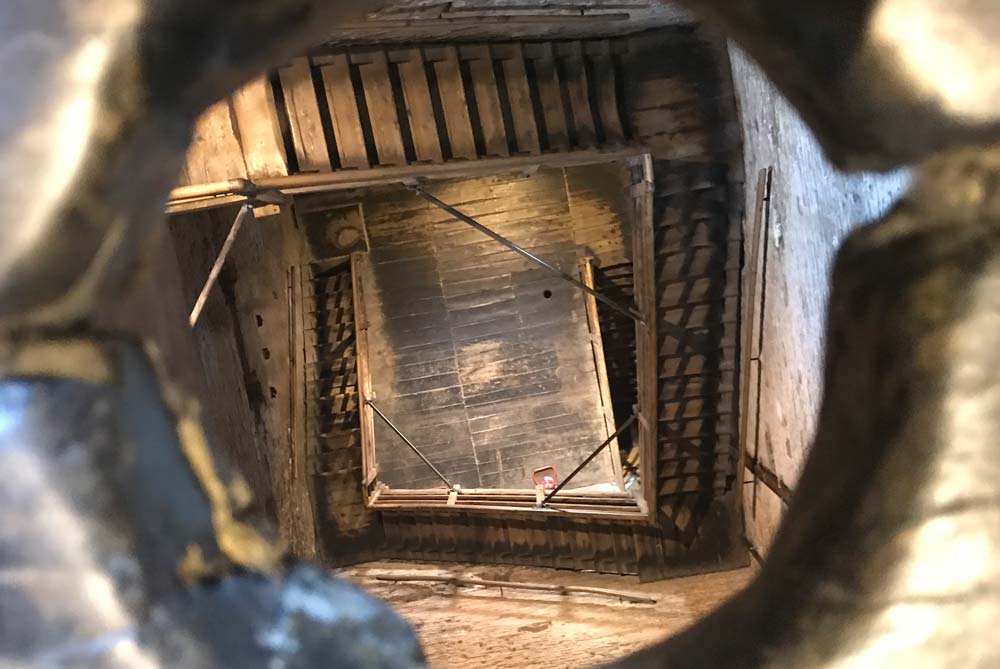 The longest Portico in the world

Portico is the name given to a structure with roofing and this walkway between Porta Saragozza and Santuario di Madonna di San Luca had 666 of them, and was 3.6km long! Porta Saragozza was 2km from our accommodation Hotel Holiday.

I finally convinced Kelly to join me on this fine Portico walk the next morning before breakfast, however after waking at 6.30am there was only one of us that was lively. So I put on my comfy trainers, grabbed my bottle of water and away I went. I arrived at Porta Saragozza (the beginning) to be introduced to what looked like never ending array of porticos. At this time (7am) the portico was pretty empty, with just a few joggers in sight. There are a few cafes and shops at the beginning, but as you start going up hill there doesn’t seem to be much.

The whole walk was in shade (kind of the point of porticos) and it was quite a pleasant walk to the top. There was a view of the Bologna football station that was pretty cool, other than that you are covered from any views, and I kind of didn’t want to escape the porticos, as I felt this would be classed as failing the portico walk. 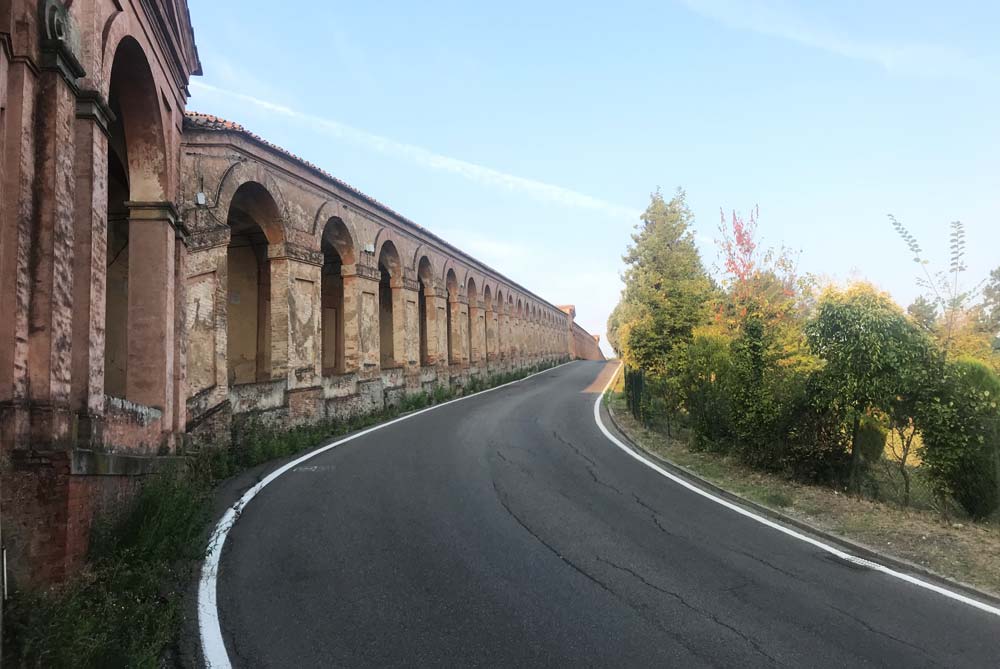 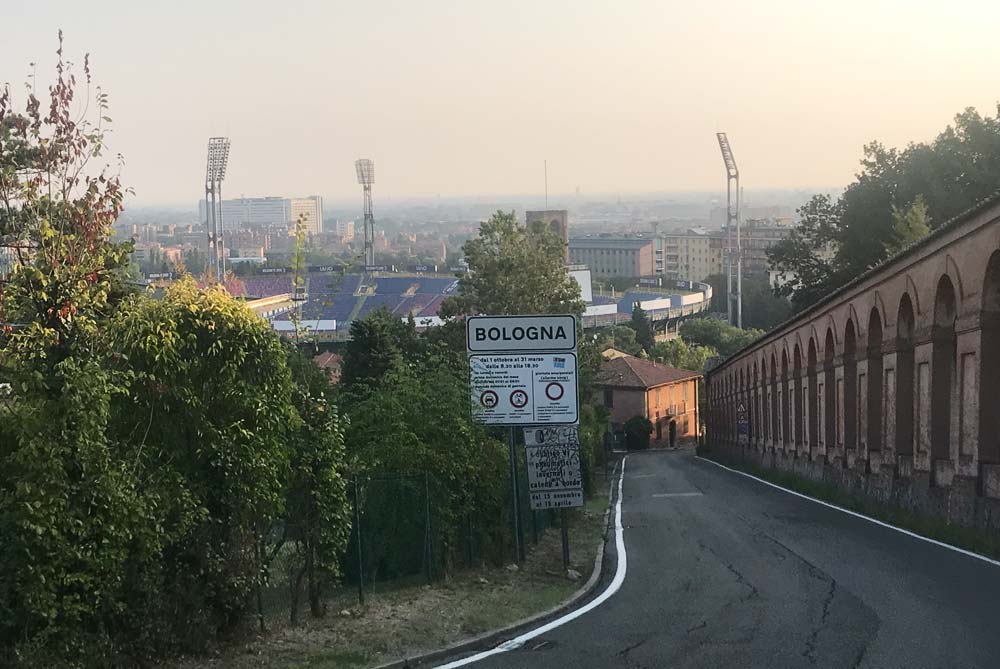 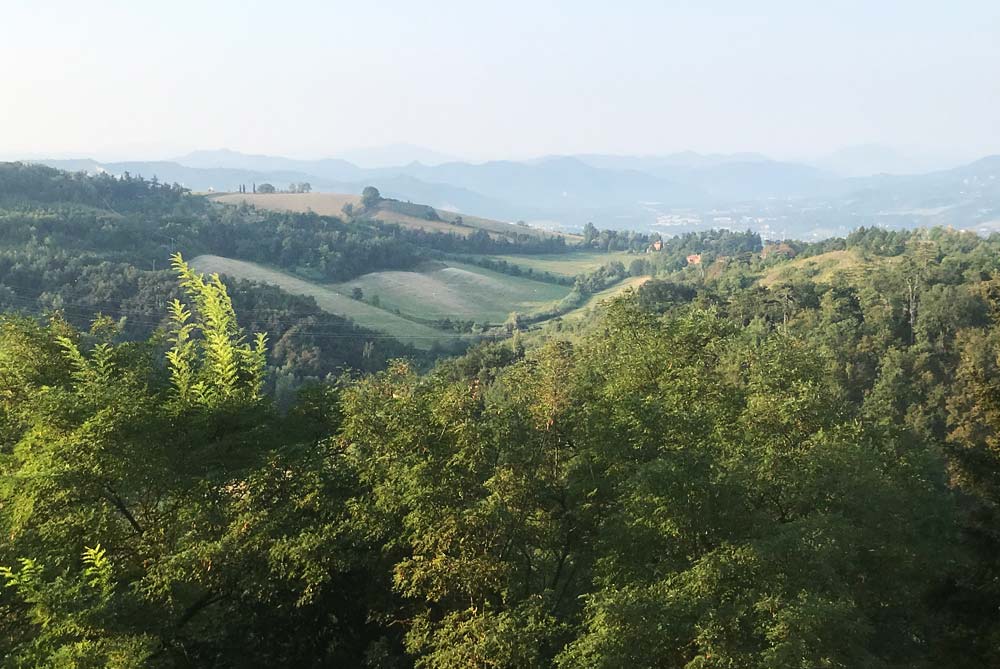 It took me approximately 1 hour to get to the top, and I crossed about 15 people in total, so it was nice and quiet at this time. I was a little disappointed when I reached the top in all honesty. I walked into the San Luca Basilica, where they had a Sunday service and explored the grounds. The views weren’t too great, as it was quite cloudy. Going through the Porticos downhill was much easier and on the way back I passed around 70 people. It took me 45 minutes coming back.

I counted 468 steps in total, but a lot of it is long hills rather than steps. If you’re stuck for time you can get a train to the top from the main square, and then experience the walk down for yourself. It was a great experience all in all. Mainly just to say you’ve walked the largest portico in the world.

Luckily we came across this little hidden gem when walking back to our hotel, as it’s about a 30 second walk away and we hadn’t heard about it. As Venice was next on our travel trip, this gave us a little insight. It’s a little window in a wall that over looks a small river stream, it’s quite stunning and perfect for pictures. 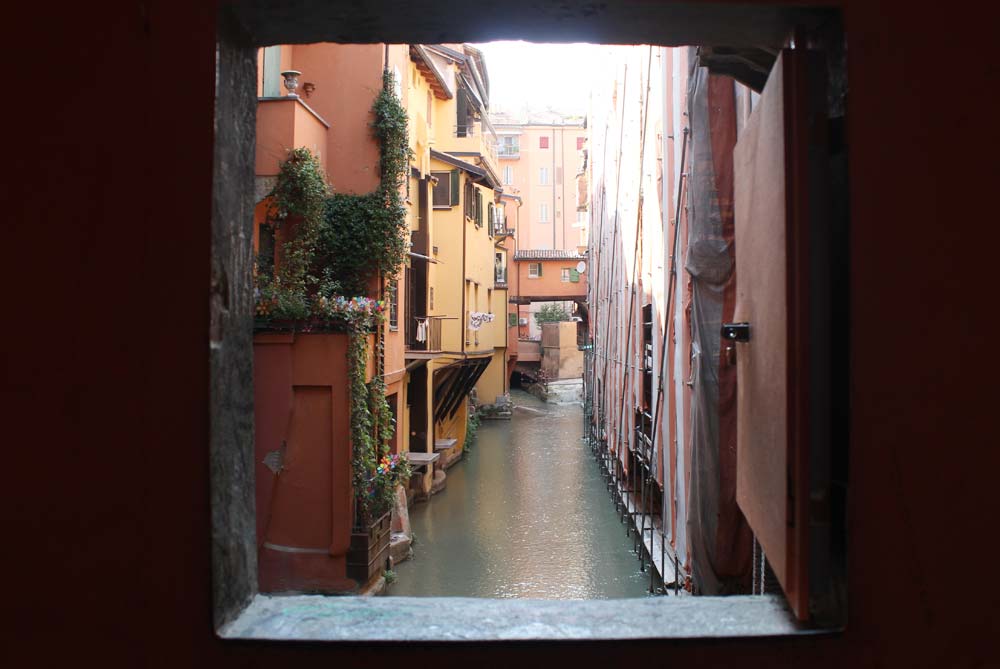 This park was something we were looking forward to visiting on our trip, however we were left disappointed. It was quite busy, but it seemed not very well looked after and not as pretty as we expected. The fountain was drained and the place looked stressed. Maybe we just visited at the wrong time of year. In front of the park there is a very cheap local outdoor market. 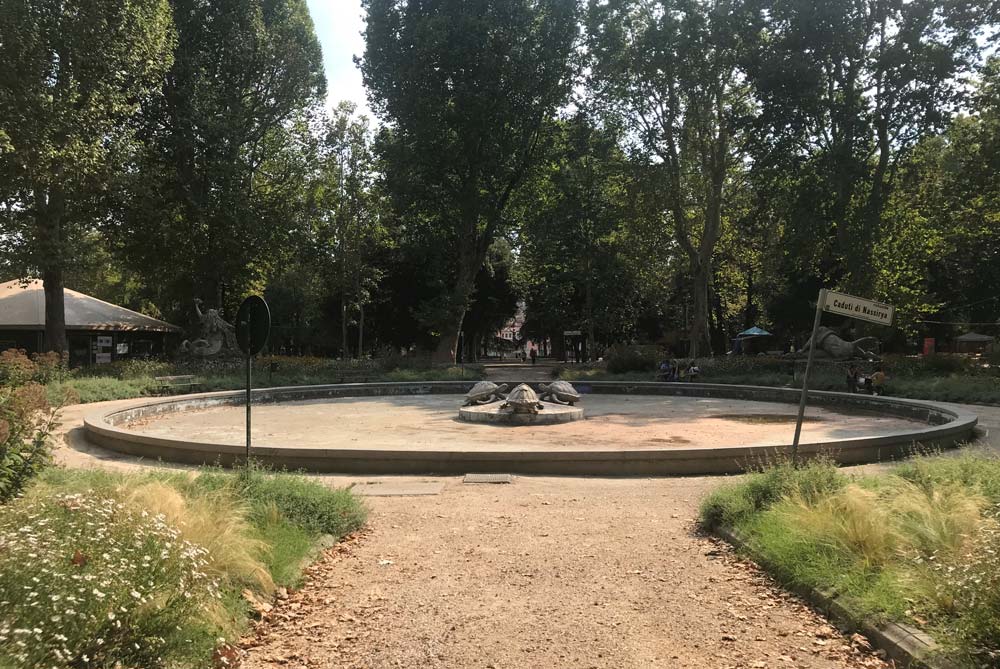 Where to eat in Bologna

For lunch on arrival in Bologna we visited Bounty after being drawn in by the board of cheap prices. We ordered a Diavola pizza and plate of chips to share, which cost €8.50. Great value considering how big and delicious the pizza was! We sat outside in the medieval surroundings, but there are plenty of seats indoors, the place is massive. Bounty was our place of choice for drinks in the evening too, and I managed to get the barman to change the Italian game over to Manchester United. We lost, so that would serve me right! 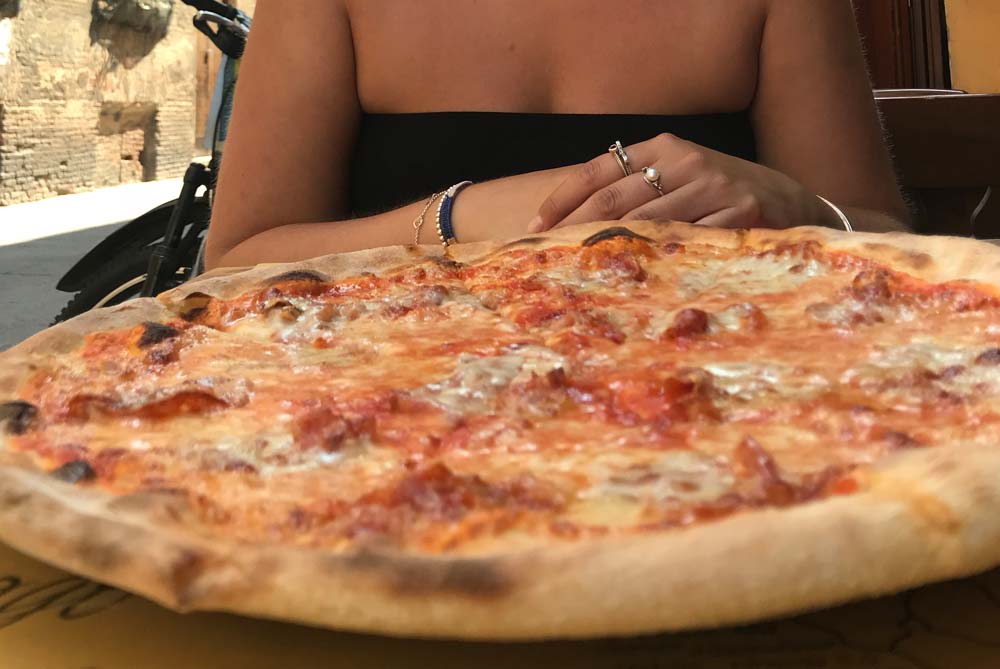 After exploring all day we had considered a few restaurants for the evening, but Osteria dell’Orsa really stood out to us. 1. It was so busy at lunchtime, which is always a good sign 2. The TripAdvisor reviews were outstanding. And I have to say we made the right choice! We arrived at around 8pm after a drink watching the football game and managed to get a table outside (which we later realized were like goldust). We had 1 litre of white wine to share and we each had Tagliatelle al Ragù. All for just €20! It really was outstanding, and by 9pm there were several couples waiting for a table.

Overall I was really impressed with Bologna, and I’m so glad we did fit it in our trip. It is currently the least ‘touristy’ place I’ve been to in Italy, which I love. It’s a small place, but it oozes with character and history. It fact this photo sums it up… Lots of heritage and history, but splattered with graffiti everywhere. 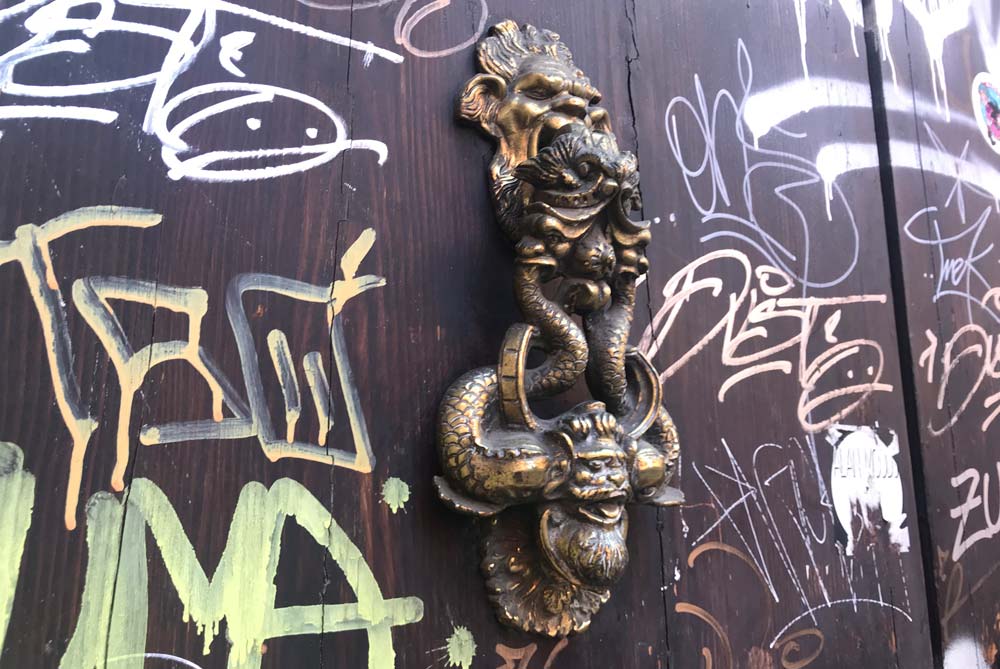 A day was long enough, but I’m sure you could fill 2 days with things to do. Next, let’s see if Venice beats that secret window view!