Train from Florence to Pisa

We had booked train tickets from Florence to Pisa so we could have a day trip at our own pace without paying extra for coaches/tour guides etc. It was cheap enough – around 8 euros each way for an hour journey. Also with a ‘no reserved seat’ ticket, you can travel up to 4 hours after the initial time you booked!

Just a warning though – The Leaning Tower and surrounding attractions are just over a mile away, so a fair stroll, but there are some funky shops and cafes on the way. Including one shop where I saw a funky pair of tweezers shaped like a cactus (but because we were travelling with hand luggage only I couldn’t buy them – but I got equally excited when I found them on eBay for half the price!)

I will admit, when we made it to the leaning tower – I was having an extreme ‘hangry moment’. We started early so I hadn’t had breakfast, it was very hot, and as you can imagine there were hundreds of people trying to take the obligatory “I’m holding up the Leaning Tower of Pisa” photo (yes – we took one of these photos too…) So, I wasn’t quite in the mood to enjoy the view, was feeling rather overwhelmed and a little nervous. A cheap, small, bready pizza (2 euros) from a vendor and a banana later, I was a little chirpier! 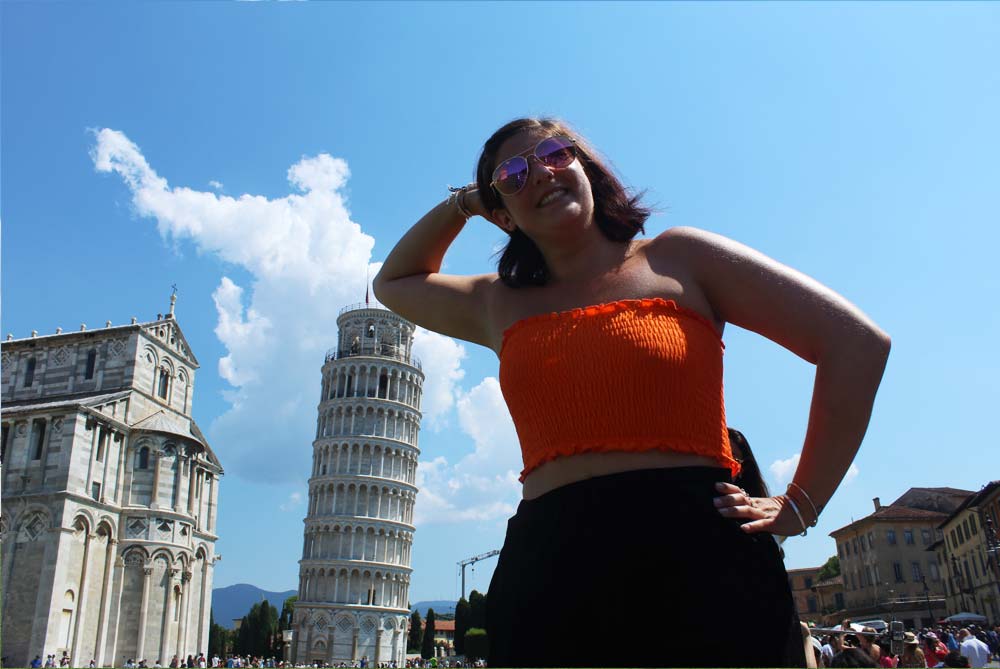 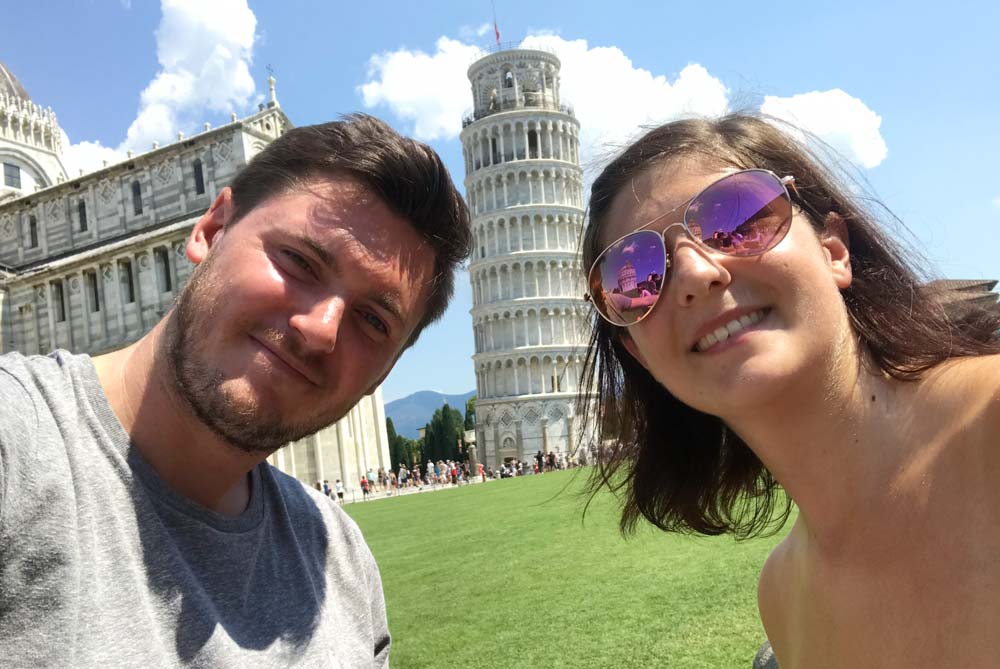 We walked to the ticket office, where there was lots of choice depending of what you wanted to do/see. We bought a ticket to climb the tower (18 euros each) and that also gave us access to the cathedral. But you could purchase lower price tickets to see just the cathedral/baptistery.

It did seem as though this area was the main attraction of Pisa, and there wasn’t a lot else. There were market stalls, just outside, but it was your usual souvenir items.

Things to do in Pisa

To get to the main attractions of Pisa this is something you are going to need to cross, luckily there are a couple of bridges, so don’t worry you won’t get wet. The views from the bridges are stunning… 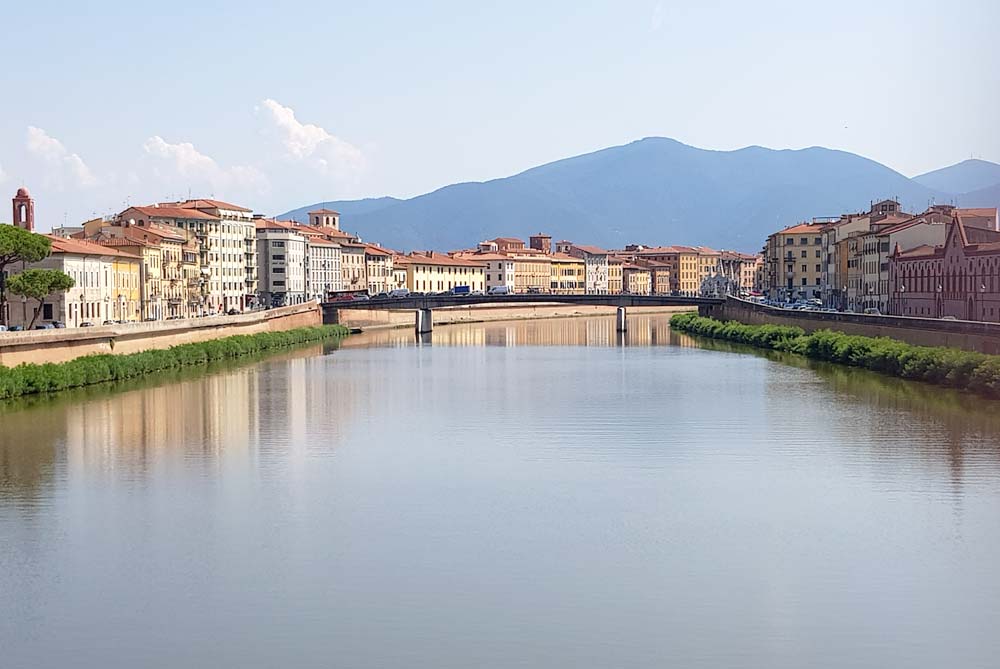 Before you cross the river from the train station you must go find this little gem. It is one of the tiniest little churches that I’ve ever seen and is stunning. It is gothic in style and very white. Inside you will find an array of random chairs spread out across the room, it was quite fascinating. 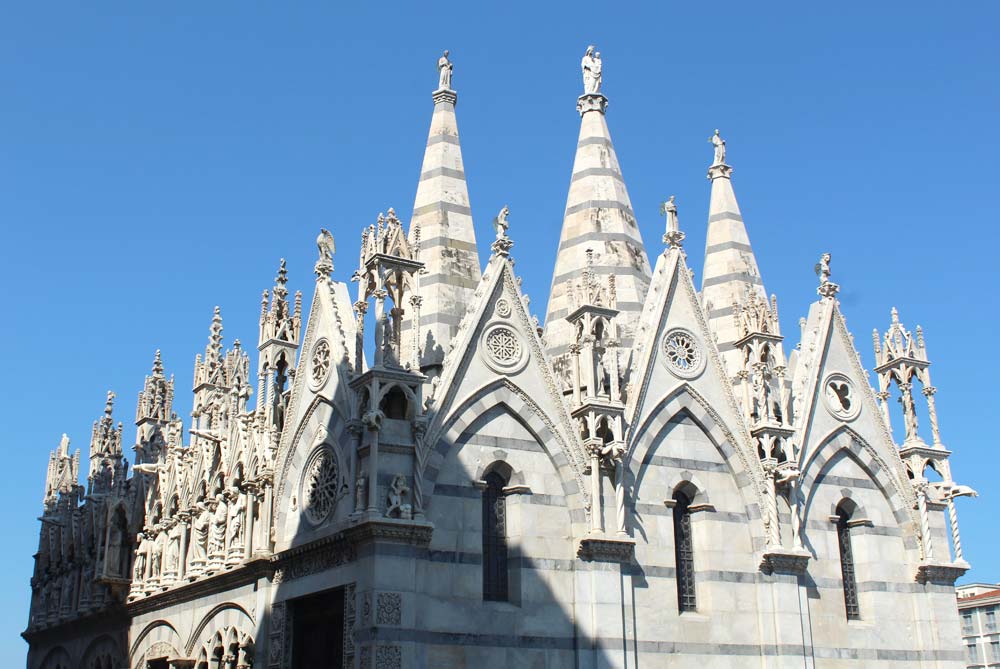 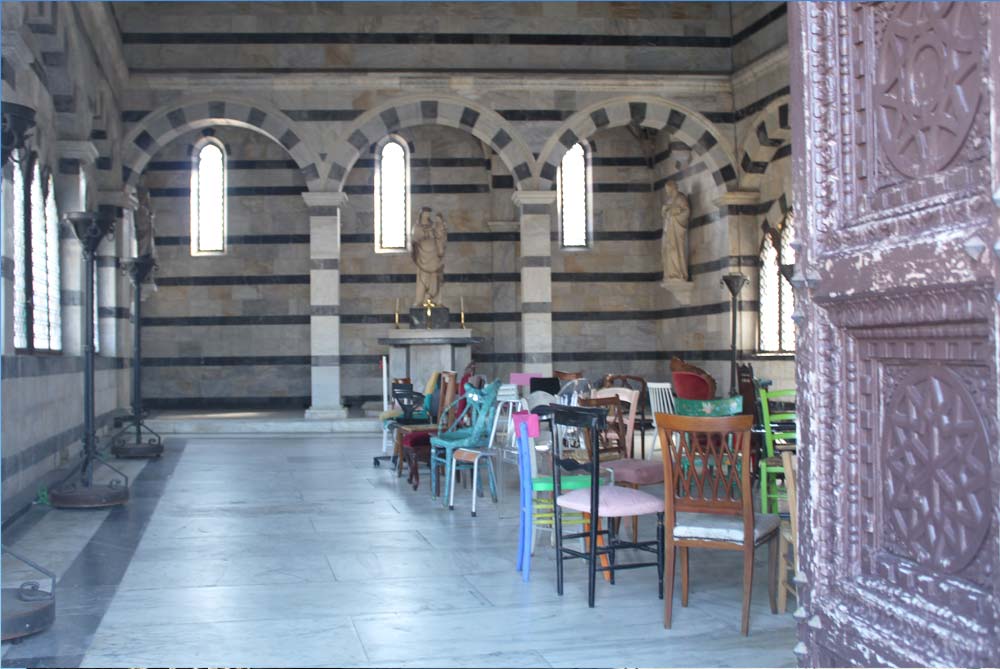 Climb the Leaning Tower of Pisa

You can get your ticket on the day from the ticket office at €18 each. In the ticket office they have an electronic board with time slots and spaces so you just book your preferred slot. Your ticket also includes entrance to Pisa Cathedral. They do not warn you in advance that you cannot take bags up, but they do offer to store your bags for free in the cloakroom, which is near the fallen angel statue next to the Leaning Tower. 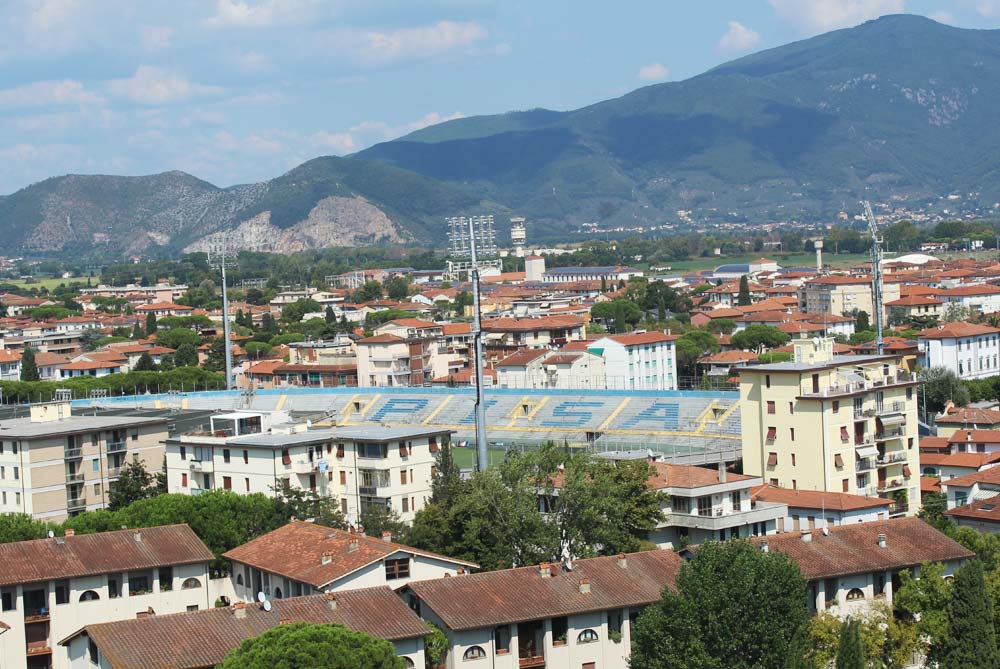 The climb itself was actually fairly interesting. It is not overly strenuous but you can feel the lean so it feels slightly unusual! The stone steps are also quite shiny and worn so can feel slippery – suitable footwear is advisable – I held up everyone coming down by taking one step at a time as I kept slipping with my sandals! Nearer the top, the steps become a lot steeper and people are moving up and down. The view at the top however overlooked Pisa and gave you a good view of the Cathedral and Baptistery, as well as all the tourists trying to take their humorous shots – honestly I can people watch all day! 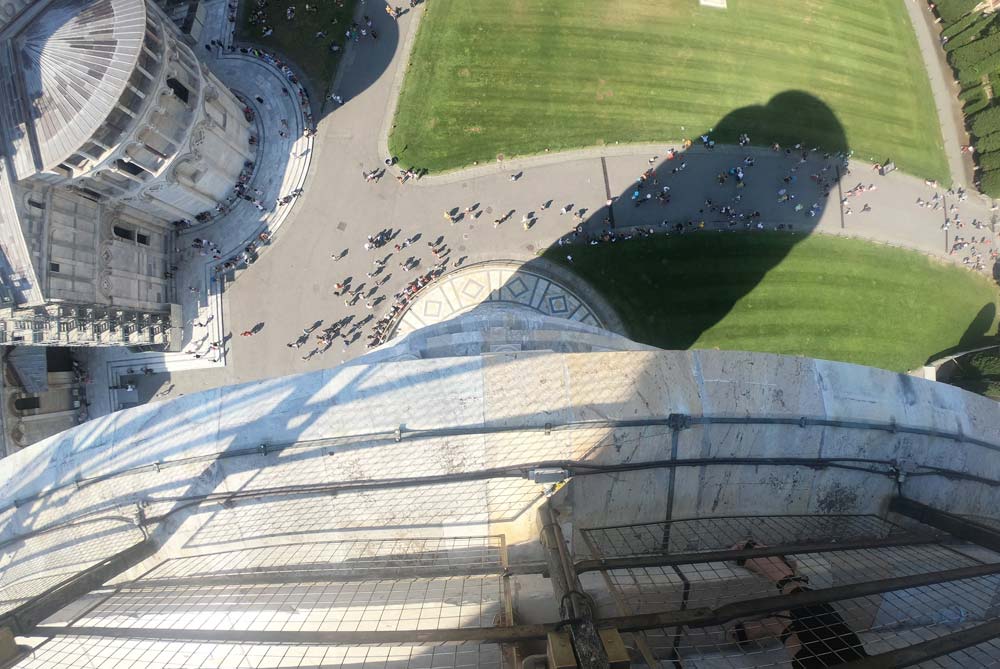 We walked into the cathedral as it was included in our ticket. It was very large with many intricate alcoves. You were able to take photos in this Cathedral and walk quietly round. It felt rather serene, even though I usually feel rather uncomfortable in religious buildings. Yet, I still sat on a bench waiting for James to take the perfect ‘insta’ shot with his numerous photo taking devices, to find he was searching for me outside! 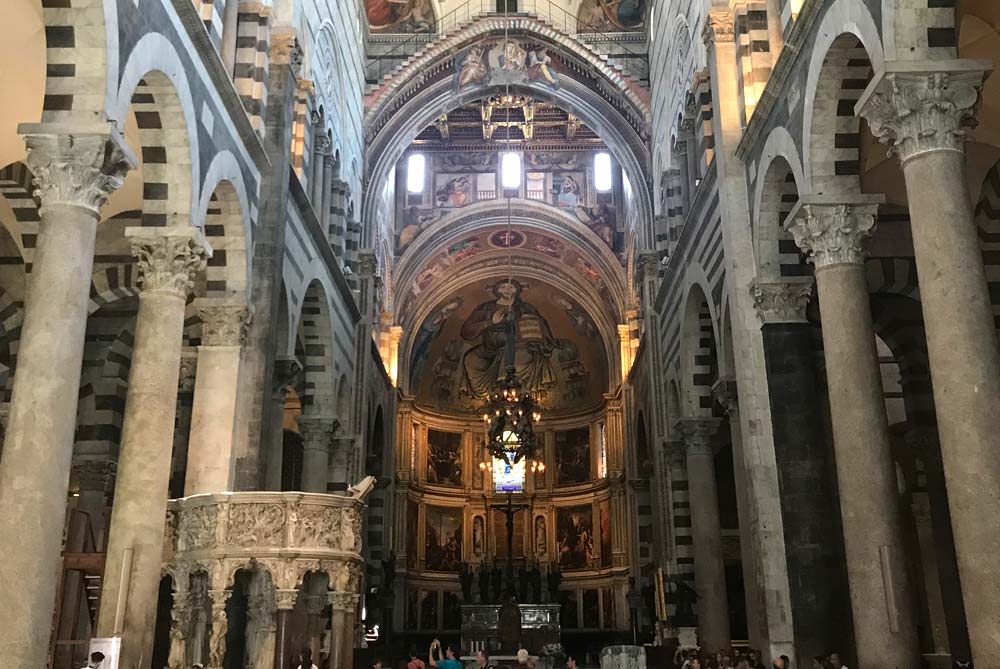 We felt we didn’t need as much time in Pisa as previously thought, so I took the opportunity to have a sit down in the shade on the grass (shocking, I know!) – the whole area is a bit of a sun trap, so the shade was more than welcome! I had a relax and read of my kindle, James went for another walk and found you can walk along a high wall that goes for miles around Pisa, including the Leaning Tower complex – he nearly missed climbing the Tower! It cost 3 euros to enter and there are a lot of photo opportunities (although even if there wasn’t, James would find one).

Unfortunately, due to time limits, he didn’t have the opportunity to explore it all. There are also areas along the wall that don’t allow you to take photos of the Leaning Tower and they are fenced off, which was a little disappointing. 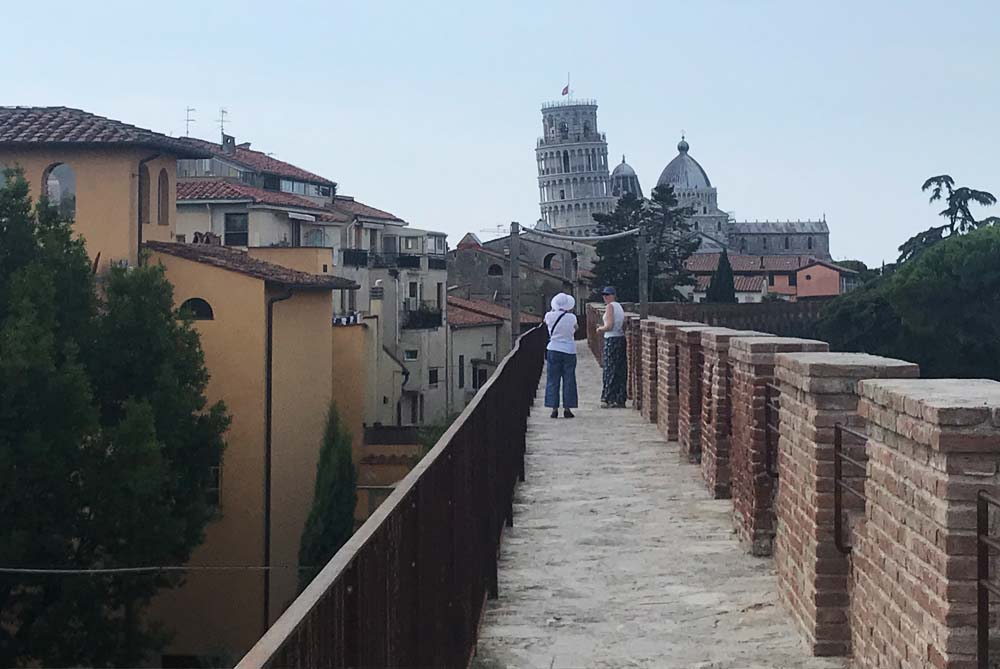 Food and Drink in Pisa

There were plenty of restaurants around the vicinity of the Tower (as I’m sure you can imagine) that were all similar prices. I had in mind what I fancied to eat and set out to find it at the best price.

About 5 minutes away we found a restaurant called Ristorante Pizzeria Il Ristoro with outside seating that looked fairly busy. I ordered my favourite Pappardelle al Ragu Di Cinghiale (Wild boar pasta) and James ordered a Pizza with Sausage and fresh vegetables. The portion sizes were very large and both included a generous helping of meat. It did not come out too quickly so I can only presume it was nice and fresh and very tasty. With two soft drinks the bill came to €25, the cheapest we had found for the area, we looked at about 20 menus. I would recommend! Their toilet on the other hand, not so fresh! 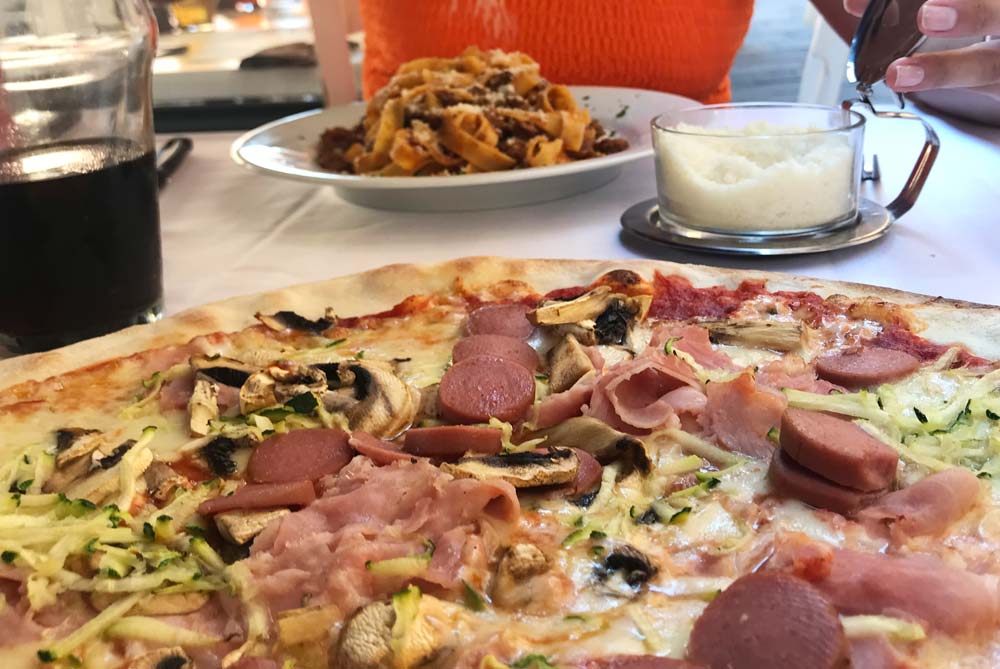 Earlier in the day for lunch, when we were both ‘hangry’ we brought a pizza and banana each from a food van right near the leaning tower. We paid €6 for the lot, and sat right under the nose of the tower, in a shaded area of course.

There was one water fountain outside the tower, but due to the heat, there was always a queue, and it wasn’t the quickest of fountains! Definitely worth taking a bottle and refilling where you can rather than buying water constantly. I did google every area in Italy to ensure the water was safe to drink – I do worry about these things!

There were toilets available behind the Cathedral, but there tended to be big queues (especially for females) and would cost 80 cents per visit. There are signposts to it.

I am glad we ticked another monument off the bucket list, but I didn’t feel we needed to spend 8 hours there. It seems as though the Tower and surrounding building are the main/only attraction to see and it gets very busy, however, the shade behind the Cathedral makes for a nice break (with less people!). To kill time you could spend it sunbathing on the greens, visiting the market behind the wall (there is also a McDonalds there!) or even walk the 3.1km of the historic wall.