I was really looking forward to seeing Florence as I have heard how beautiful it is. However, this was the only place on our Italy trip where I knew we had to share a bathroom (something I am aware I need to get seriously used to for when we travel Asia). This may not seem like an issue for some, but for me, some of my irrational anxieties (without going into too much detail) are around available bathrooms, so I was a little nervous about this one!

Getting to Florence from Passignano sul Trasimeno

We arrived via train (Firenze Santa Maria Novella) after I got excited about Italy having double decker trains – I even took a photo of one! We took the train from Passignano sul Trasimeno which is where we had a wedding, such a lovely place! It took 1 hour 30 minutes and cost about €13 each. It only takes 1 hour 20 minutes if you’re catching it from Rome! The trains are fabulous.

On the way to our hotel, I immediately took us in the wrong direction (stupid Google Maps!) and James was searching for somewhere to buy a new phone lead (he had gone 3 days without a phone, which was a crisis!), all in 30 degree heat with backpacks on. Therefore, I was already losing my patience. After a 20 minute walk, we found the hotel.

Where to Stay in Florence

We stayed in Loggia Fiorentina, which we booked via Expedia (Tip: set up accounts with Booking.com, Expedia etc and shop around, you can get some really good deals if you are a frequent booker and signed in).

We arrived and were greeted by Diana who offered us our key, some instructions and a city map. She informed us that our room had been upgraded to a bigger room with a private shower cubicle. The room was clean and rather big – a little strange to have a shower in the corner of the room but also pleasant to have our own. There was also a sink, big mirrors, air conditioning as well as a fan. There was also a TV, in which I became a little obsessed with the music channel Radio Bruno (highly recommended guys!) I felt surprisingly relaxed. There were 2 bathrooms on the top floor for 8 rooms – again both very clean and private. We could also use the 3 bathrooms on the ground floor if necessary. I am shocked to say I felt I did rather well with the bathroom situation during my stay!

We picked this hotel just because the price was so low considering we were visiting in peak time – it may not be luxurious but I would definitely recommend it. We paid £120 for 3 nights for both of us.

The location was also brilliant – at most a 10 minute walk to Florence Cathedral (Duomo di Firenze), 20 minutes to Ponte Vecchio, 15 minutes to Uffizi Gallery and about 3 minutes to Galleria dell’Accademia to see Michelangelo’s David.

Things to do in Florence

We only had 1.5 days to explore Florence as we had booked train tickets to visit Pisa during our stay but we managed to fit in an awful lot! Of course this meant miles of walking (again) but I am happy to report that Florence is a lot smaller than Rome so I managed more and moaned less! James would probably say differently – but don’t listen to him!

James was desperate to see the works in this gallery and said it was in the top 10 world museums or something (I will admit I had never heard of it!) On our first afternoon we walked past Uffizi and saw how busy it was. Queues were everywhere, and at least a 2 hour wait for getting tickets on the door and online tickets had sold out (even the queue to collect online tickets was huge!). 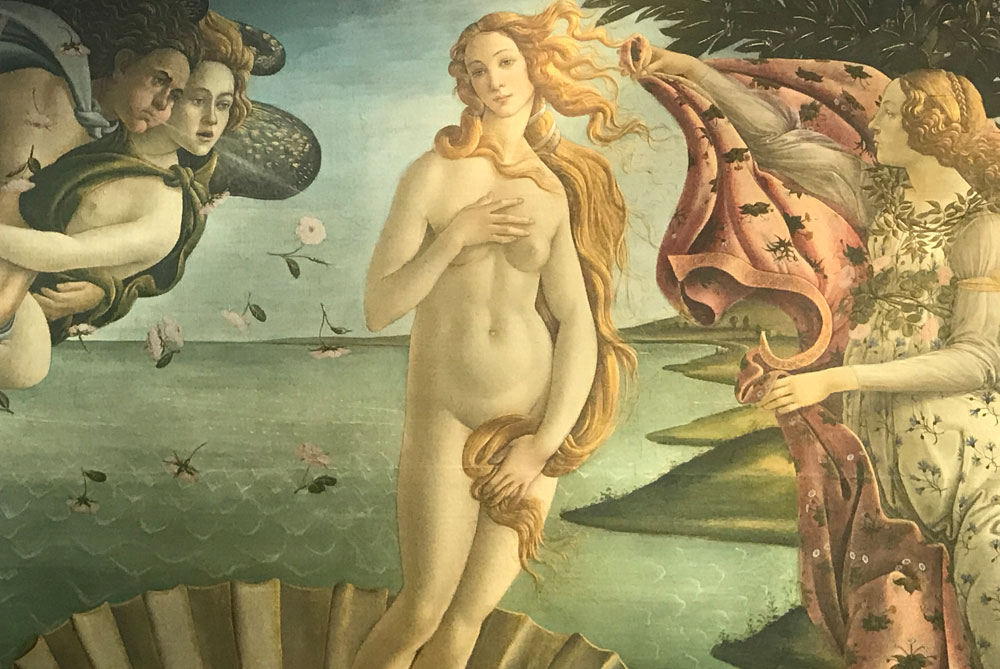 After hovering for 20 minutes looking lost, we finally asked a staff member to find out you could pay an extra €4 each to skip the 2 hour on the door ticket queue. Although tempted we decided to come back at opening time the next morning as tickets were already €20 each. We arrived at around 8.45 am to find that the ticket queue was already 2 hours long! So, we went and bought reserved tickets for 9am and got in pretty much straight away (really worth it if you don’t have much time). These reserved tickets can be brought on the day between the tour queue and the the on the door queue, it’s the entrance in the middle.

I am not much of an art/museum person but it was pretty amazing to see Botticelli’s ‘The Birth of Venus’ an artwork I recognised. Most of the art is religious in matter, which doesn’t necessarily interest me, but for those that understand art and the importance of it – this is a must see in Florence. Lets just say James was camera happy. Lucky enough there were quite a few seats.

Pictures do not do this place justice, it is incredible. The intricate detail was so much to take in – it was beautiful! We admired the view on numerous occasions – sharing a takeaway pizza from Mister Pizza, sipping a spritz from the Irish Bar and even sitting down for dinner with the Cathedral as a backdrop. 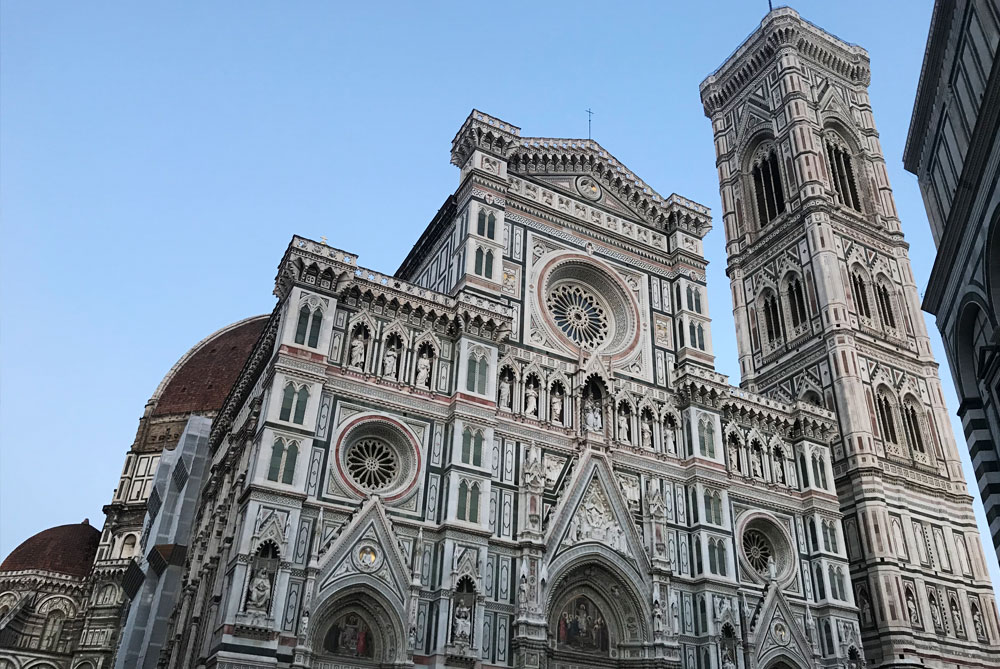 Again, the queue to see the interior was very substantial. It is free to visit, but people were queuing at 8.15am for a 10am opening time. We decided to queue up and waited around an hour (the last 20 minutes in direct sunlight, and I am really not a patient person!). Lots of tour guides will try and convince you to spend an inflated amount to visit other elements such as the dome/tower/Baptistery but you still need to wait in the queue for visiting the inside of the cathedral. There is no skip the line for this one. There are numerous street acts and artists to keep you entertained whilst you wait in the queue thought, so that was a plus! 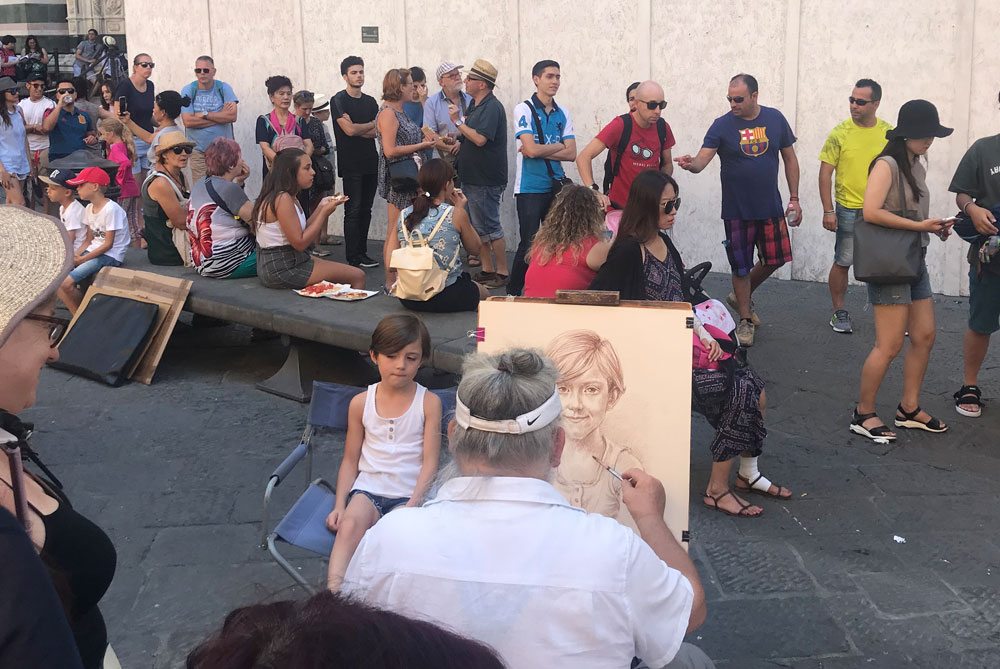 Once inside I was actually really disappointed with the interior. I found it a contrast to the intricacies of the outside design – but decide for yourself! James really wanted to climb the dome (around 18 euros) but this was sold out online and in the ticket office which is in the square, so book in advance if this interests you.

What I will say, is be mindful of your clothing – to be respectful, shoulders and knees should be covered. Lots of people were having to spend money to buy a sheet of material to wrap around their shoulders of knees. I was prepared with a T shirt or a sarong/wrap!

Not for the faint hearted! As we couldn’t have city views from climbing the dome, we walked to this view point. It is quite a walk and mostly uphill, but so worth it when we got to the top! There are panoramic views of the whole city (for free!) clearly showing Ponte Vecchio, the cathedral and all the terracotta rooftops – just stunning for photos. There are toilets, cafes and market stalls up there too, so you can spend a little time if you wish. 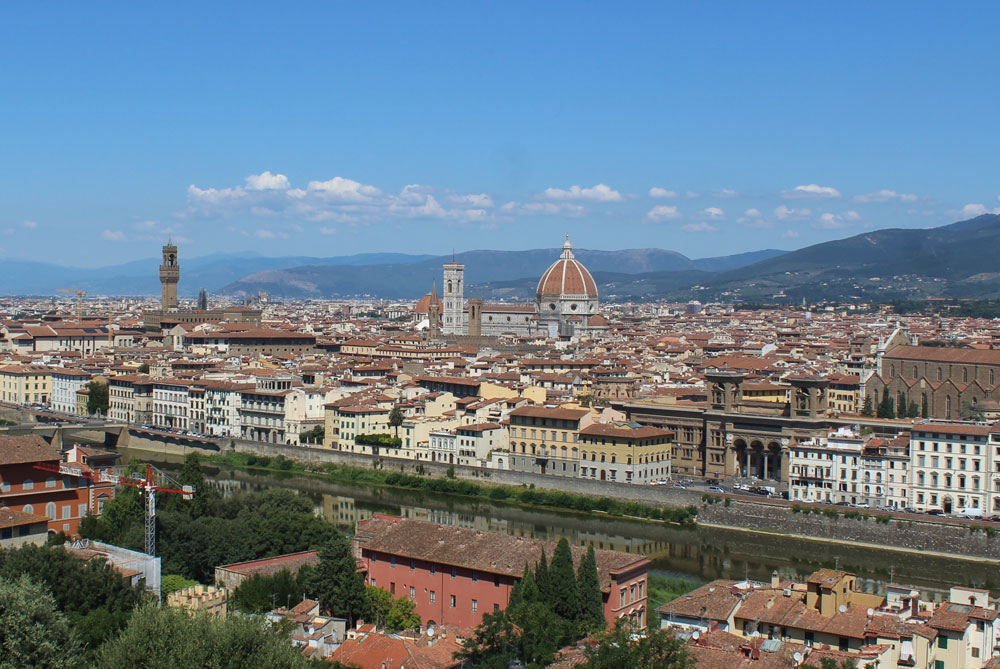 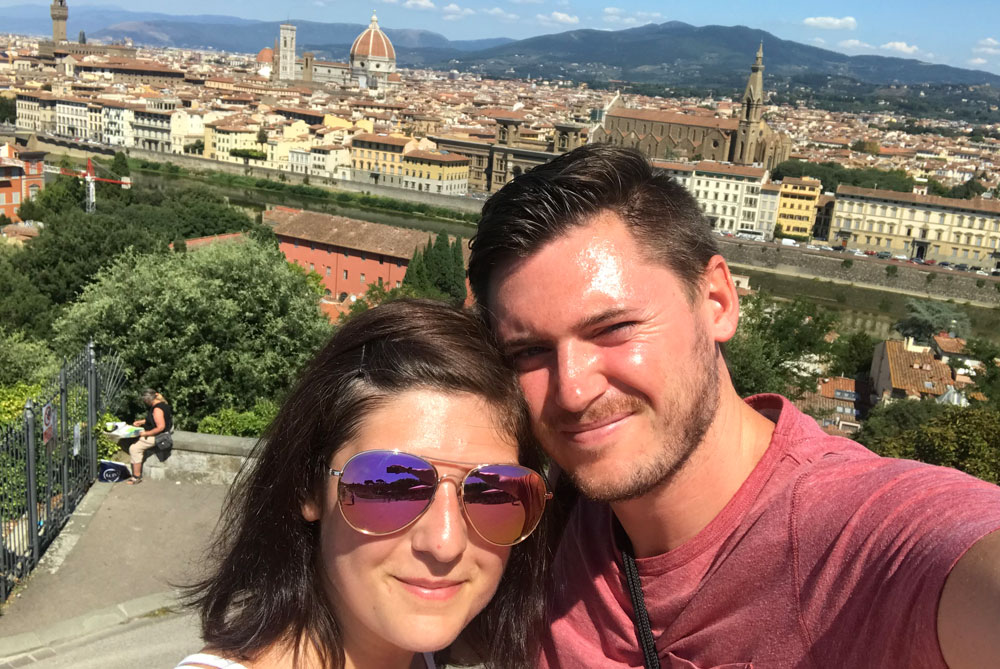 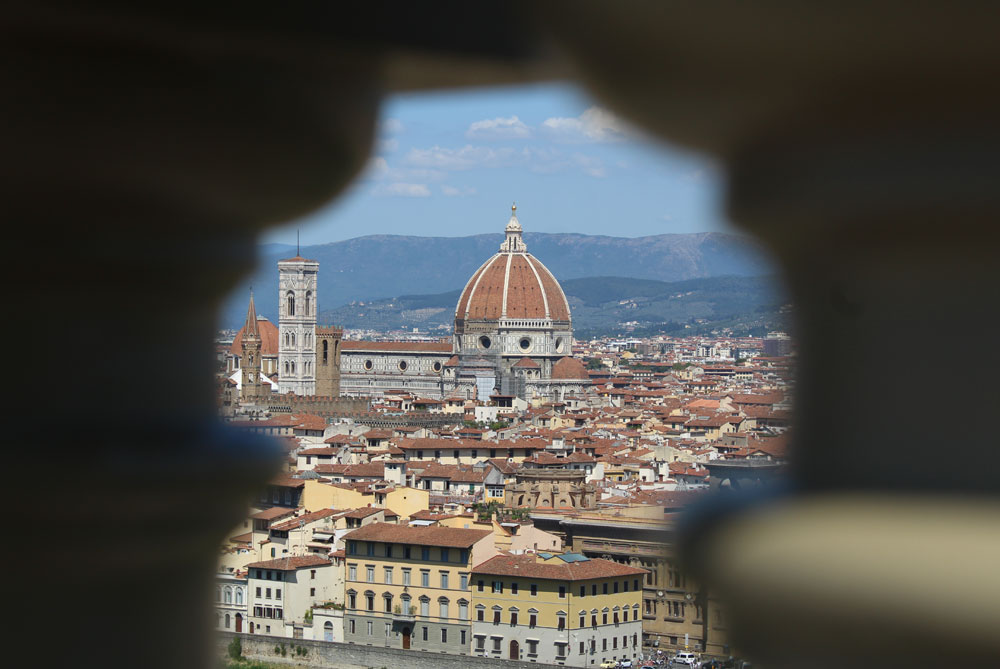 This is quite a small gallery, but home to Michelangelo’s famous David statue. Again, expect queues! We went at the end of the day (it closes shortly after 6pm) and still waited around 40 minutes. We paid €8 each to enter to see the main spectacle. David was a lot bigger than expected and clearly displayed (no pun intended!), so I got numerous photos to seem cultural! James was shooting from every angle until I dragged him out of the gallery as I was exhausted by this point! There is also a replica of David next to Uffizi gallery. 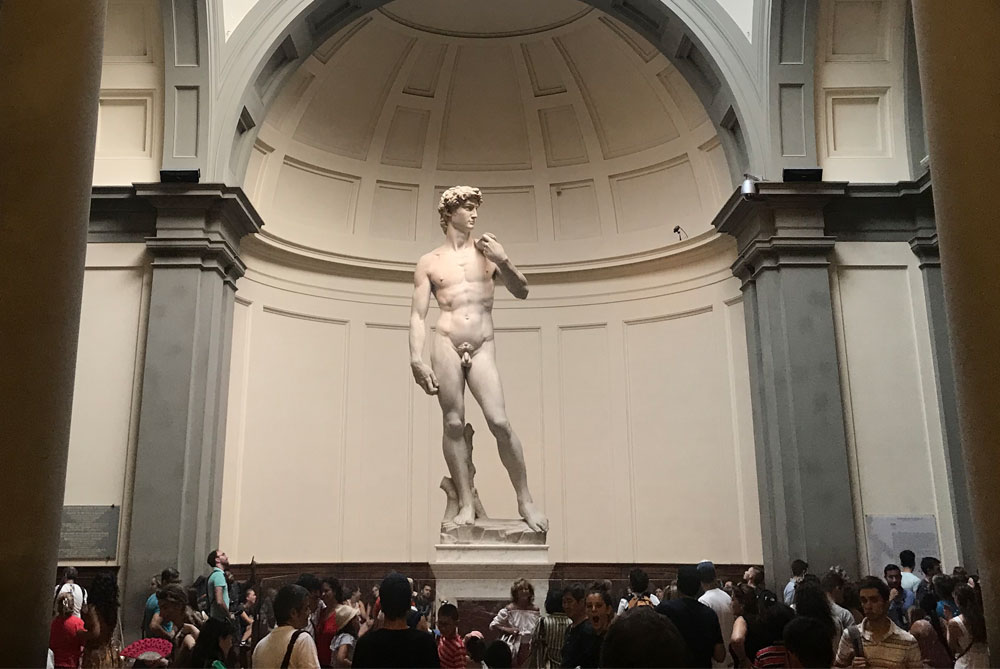 Ponte Vecchio is a cute little bridge with plenty of jewellery shops! James was quite amazed at seeing a bridge with buildings on it, I think it must have been a first. Ponte Vecchio leads across the river towards Michelangelo’s Piazza, Palazzo Pitti and the Boboli Gardens. The Piazza is free to visit and a must see, we decided against the palace (€17 each) and gardens (€10 each) because of the cost. 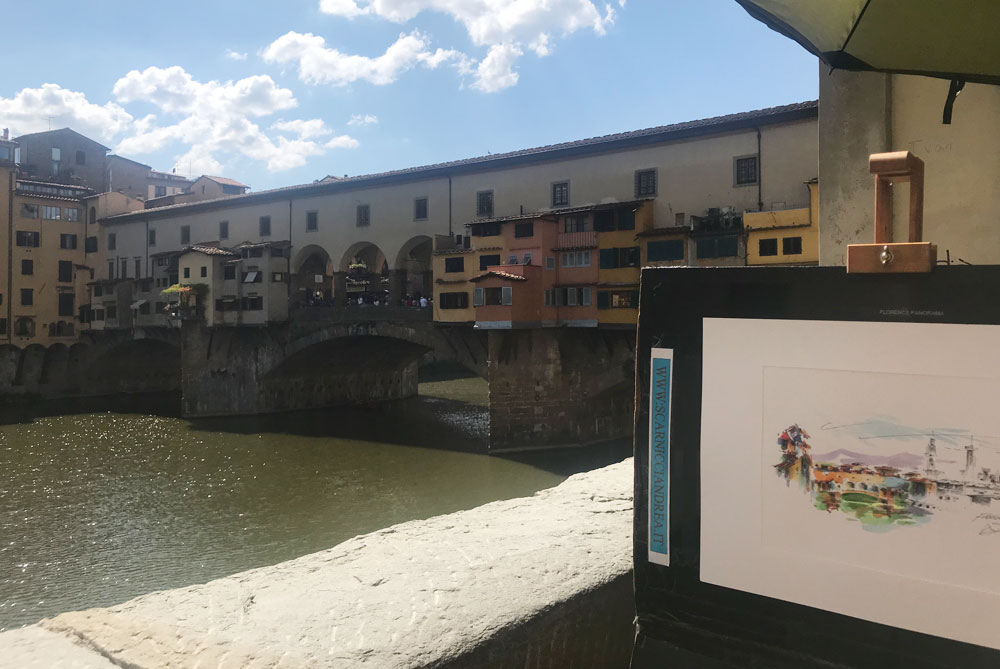 Something I did notice, was the expense of soft drinks in Italy. For a small can of diet coke from a vendor or a restaurant was usually around 2.50-3 euros, bottles of water usually 2 euros. I would advise stocking up from a local supermarket. What we did was buy water from the supermarket to fill up out water bottle in the mornings and use the numerous fountains available all over the city that offer clean drinking water to fill up during the day – I would definitely recommend this if you are on a budget. 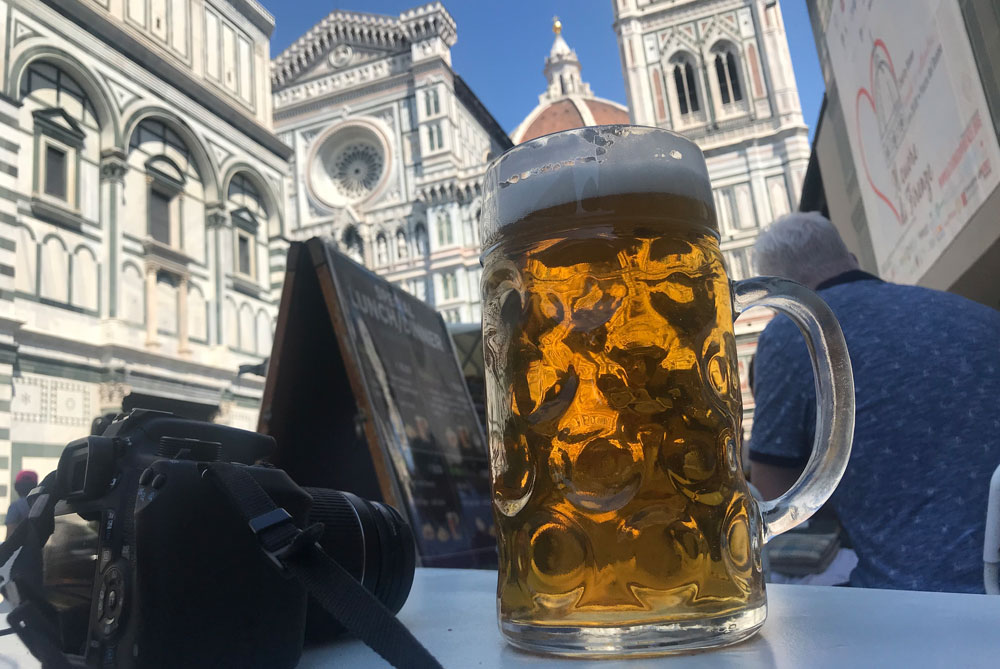 On the corner of the square there is a little Irish bar that sells a 2 pint glass of local beer for only €8. When we went in there they thought we were sharing, but of course this was just James’. We also noticed a little spot at the top of the Irish bar for 2 people which looked incredible overlooking the cathedral etc. We were hoping it would become free at some point but never did!

Look out for Carrefour Express and Conad City, these were the cheapest supermarkets we found. We were also introduced to our first 99 cent stores in Italy here. These came in really handy, and are especially good for little Florence gifts – you will find similar items on the market stalls for five times the price. Who doesn’t love an Italian equivalent to Poundland!

Ice cream/Gelato parlour with chocolate cascading down the walls!! It’s a bit of a novelty, but not much more expensive than any other Gelato. It was queuing out of the door but it was such a delicious treat! There are a few dotted around Italy, so definitely worth a visit! 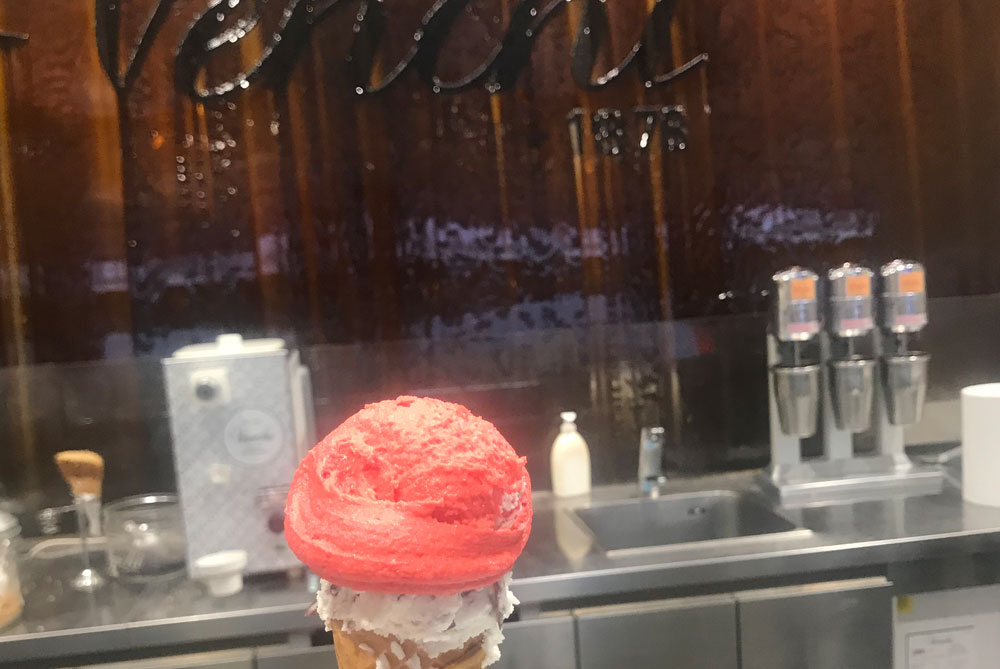 Food wise, if you are to sit down and eat at a restaurant, it is unlikely you will get much change from 40 euros for 2 of you, we even had a McDonalds our first night rather than going out and that had inflated prices also! There were restaurants everywhere though!

Florence was a fairly expensive part of our trip but we squeezed so much in and it had such a wonderful atmosphere! Next – day trip to Pisa.