Our friend Gosia had very thoughtfully booked a flight that arrived an hour after James and I were due to land in Sri Lanka from India, so we agreed to meet her at the airport. I got very excited, and James even made me a little sign for my phone with Gosia’s name to hold up like drivers do at an airport! Quick emotional hello and off to an UBER!

Where to stay in Colombo – My Little Island Hostel

This was our first stop in Colombo which was located in Colombo 03 district. We had booked our first night here in a dorm – James and I got a double bed (still a bunk bed!) and Gosia was in the same room.

It was a really lovely hostel – really comfy beds with plump pillows and super clean! You also get fresh towels and toiletries provided. The breakfast was amazing for a hostel – fresh fruit, toast and eggs cooked to your liking with table service! The hosts were really chatty and attentive. I would definitely recommend staying here. 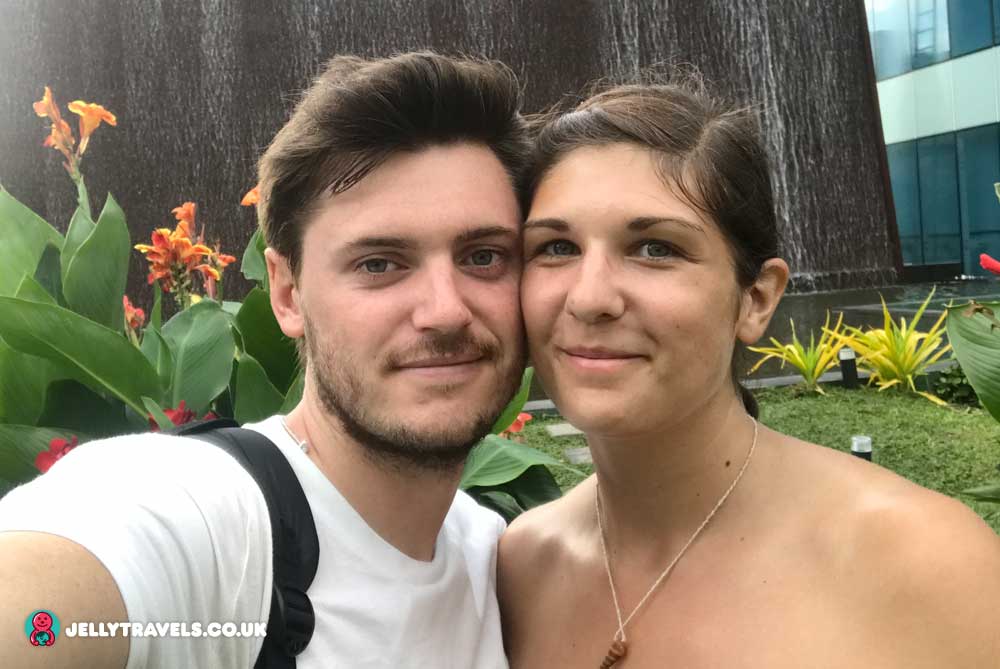 We asked about trains, as we were due to travel to Kandy the following day and they double checked the times, advised us to get the express train and stated we should get to the station about an hour before departure.

We had a quick Google of close by restaurants and chose Cloud Café. It was located in a hotel on the top floor. When we arrived, it stated the top floor/outside terrace was closed due to expected weather conditions, but the menu would be provided in the bar on the next floor down. The bar was small but intimate.

I had my first cocktail of the trip (special treat – my friend was on holiday with us!) and Gosia and James chose a Lion beer! We ate, drank, caught up and listened to live music. One band decided to sing “living next door to Alice” and it took all the strength I had not to bellow “who the fuck is Alice” after the chorus!

We believed the prices to be fairly reasonable in this bar until we got the bill, where they had charged us about a 30% service charge! We questioned it but they stated it was correct. It seems as though service charges can pretty much be made up depending on location!

On our first afternoon/evening we didn’t have much time to explore Colombo as we were heading to Kandy the next morning by train. We came back to Colombo 5 days later from Dambulla for our last day, catching a cheap 4.5 hours bus.

On arrival back in Colombo we went out in search of food around 2.30pm and it seemed really difficult to find a nice café or restaurant that was open! We ended up in Queen’s café where I finally had a beef burger that I had been craving! We were planning to go out that evening for a drink but after relaxing we ended up getting supplies from the supermarket and watching Louis Theroux documentaries together on Netflix – Ah the travelling life!

Things to do in Colombo

On our last day in Colombo, someone (*cough* James *cough*) though it would be a great idea to walk the city! We started with one tuk tuk to Viharamahadevi Park. There wasn’t much to see but there was a special gold Buddha with small lily ponds either side. It’s a nice park to have a quick stroll around. There were horses in a stable and a few fountains (but unsure if they were active or not). 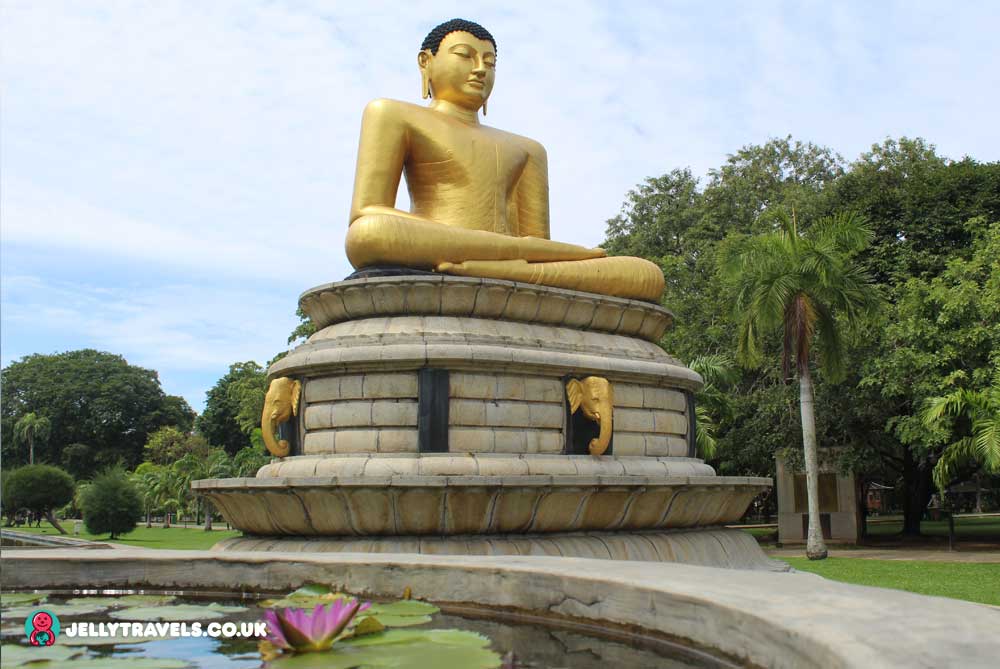 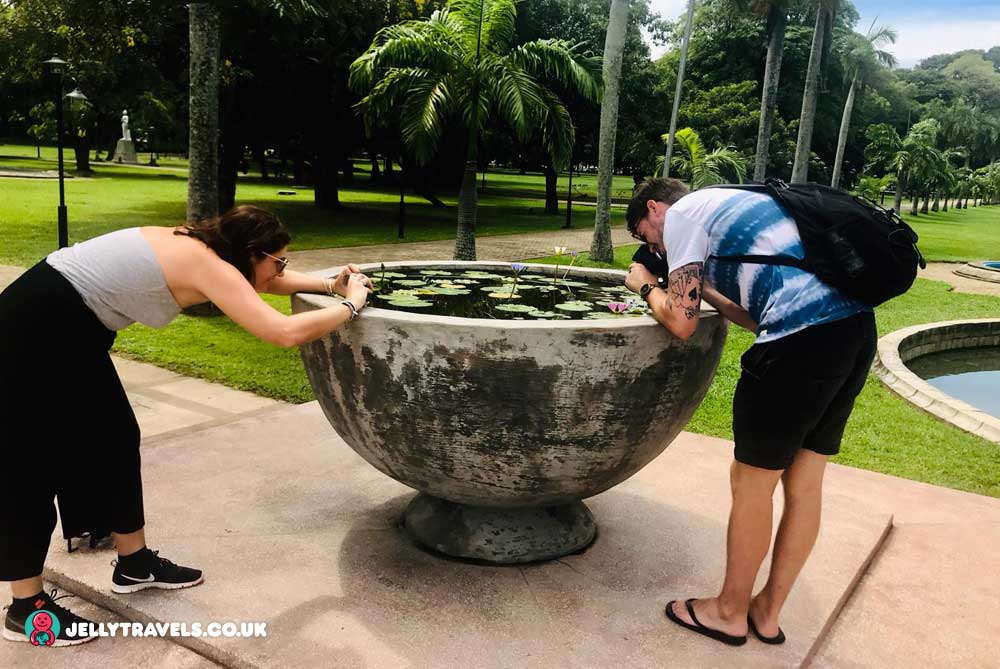 Be careful of tuk tuk drivers trying to scam you. We were approached by a guy who said he works at our kitchen in our hostel and seemed to be helpful, flagging us down a tuk tuk. Until the tuk tuk driver mumbled a cost of 1,000 rupees for a 150 ruppee journey… We told him where to go!

We walked around to this temple which didn’t look too impressive from the outside. It was 300 rupees to visit but also included another temple a little further down on the lake. 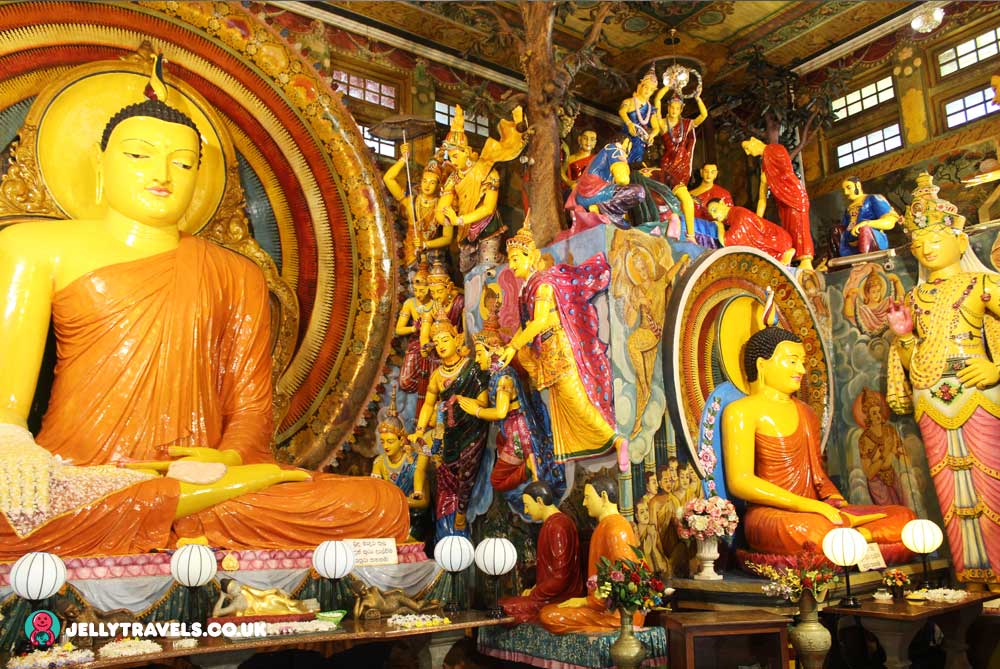 A lot of the vicinity is filled with old artefacts such as statues, crockery and even cars. It was quite bizarre – like being in an antique shop or hoarder’s house! However, there are some gems if you look out for them – such as the smallest gold buddha statue in the world! 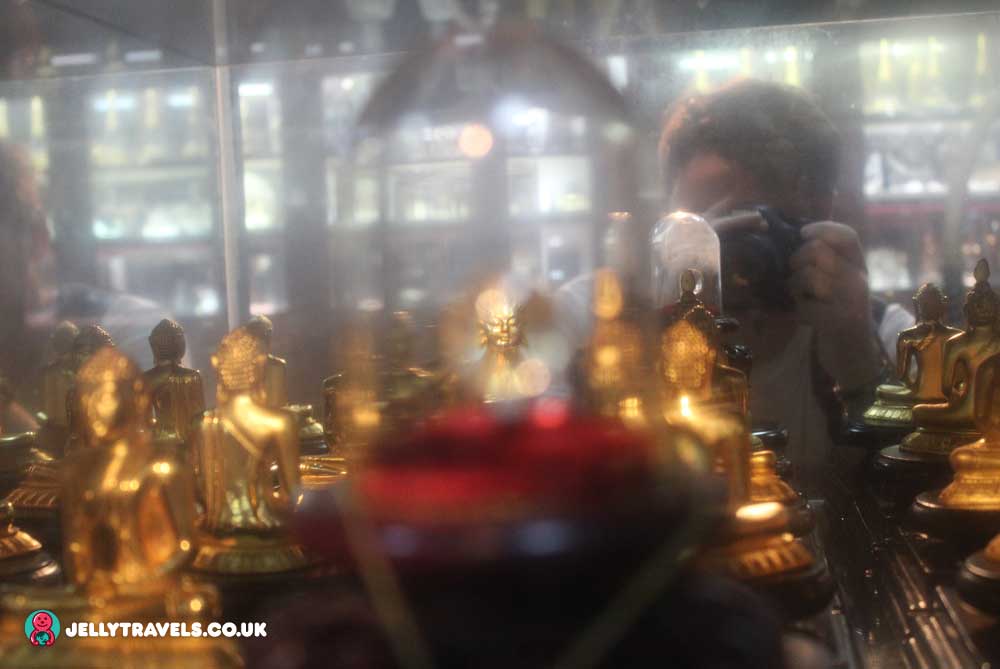 There was a small shine where a monk dressed in orange wrapped a bracelet around your wrist and wished you luck, which was a really nice moment. There was also a rooftop of stone Buddhas which makes for a good photo! 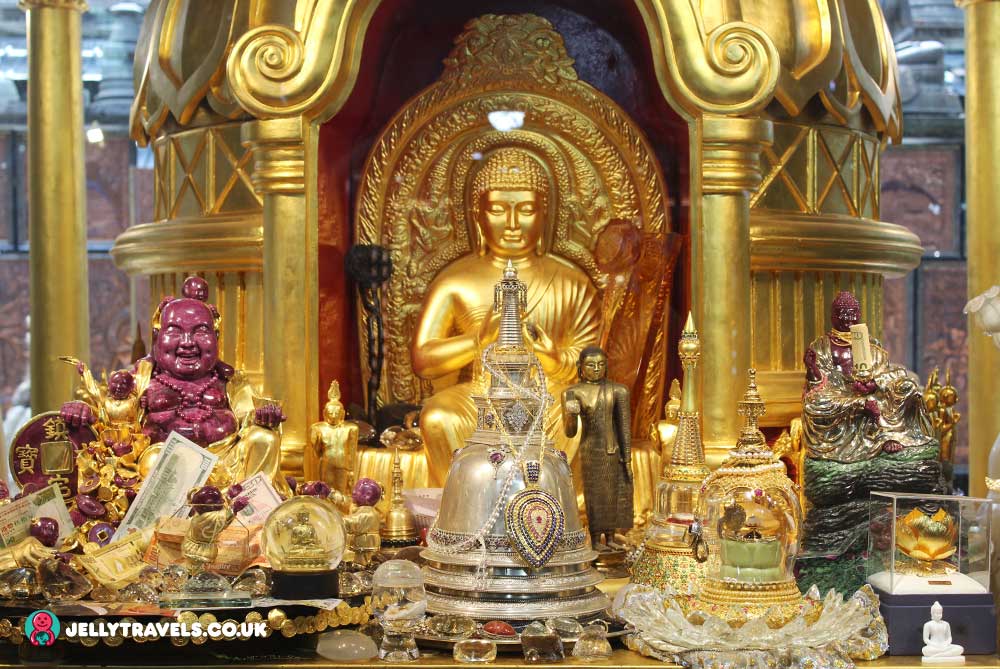 The main attraction is inside the temple. Bursting with colour, it displays numerous Buddha sculptures, decorated walls and ceilings and sculptures protruding from the wall. Its hard to stop taking pictures or looking to see if you missed something! 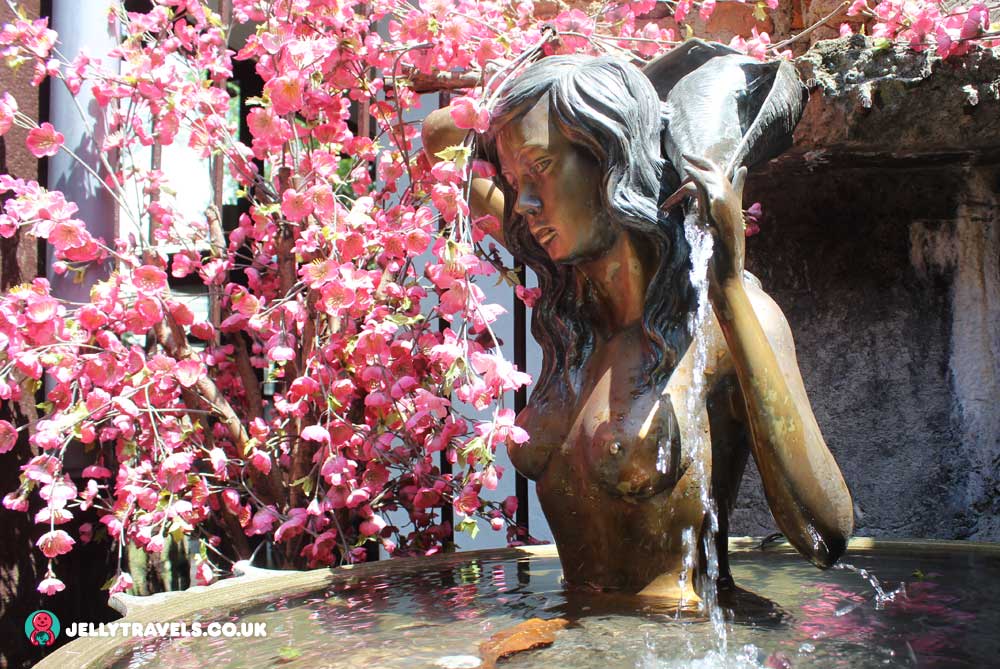 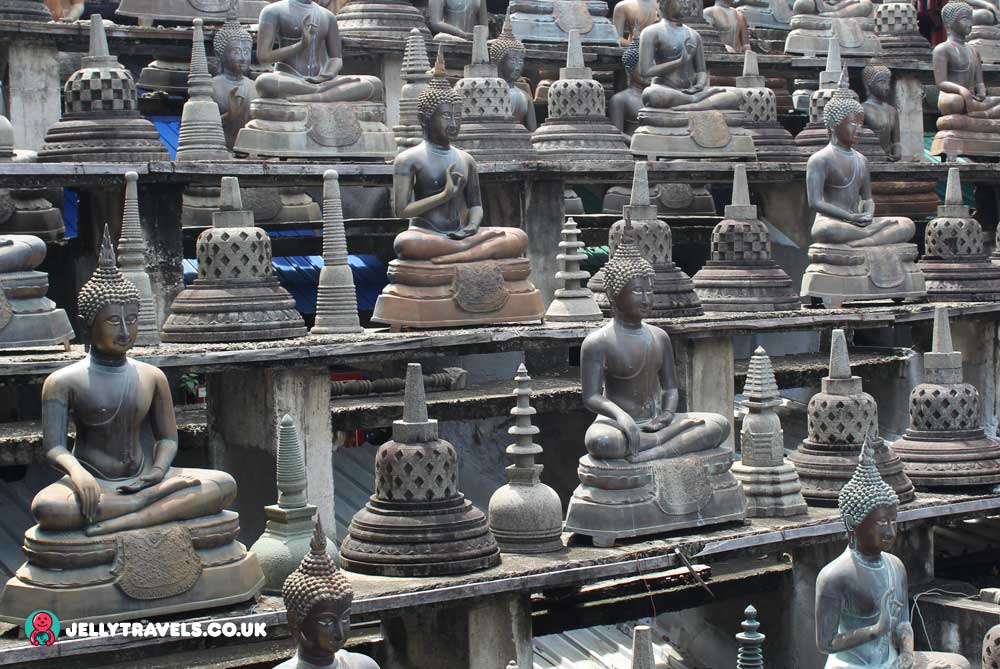 This place really was beautiful and different and started to put a good spin on what had seemed like quite a dull Colombo so far!

This was the second temple included in our ticket price. It was only a 5 minute walk away. It was situated on the lake which made for pretty surroundings. Numerous Buddha statues surrounded the main building with golden statues inside. 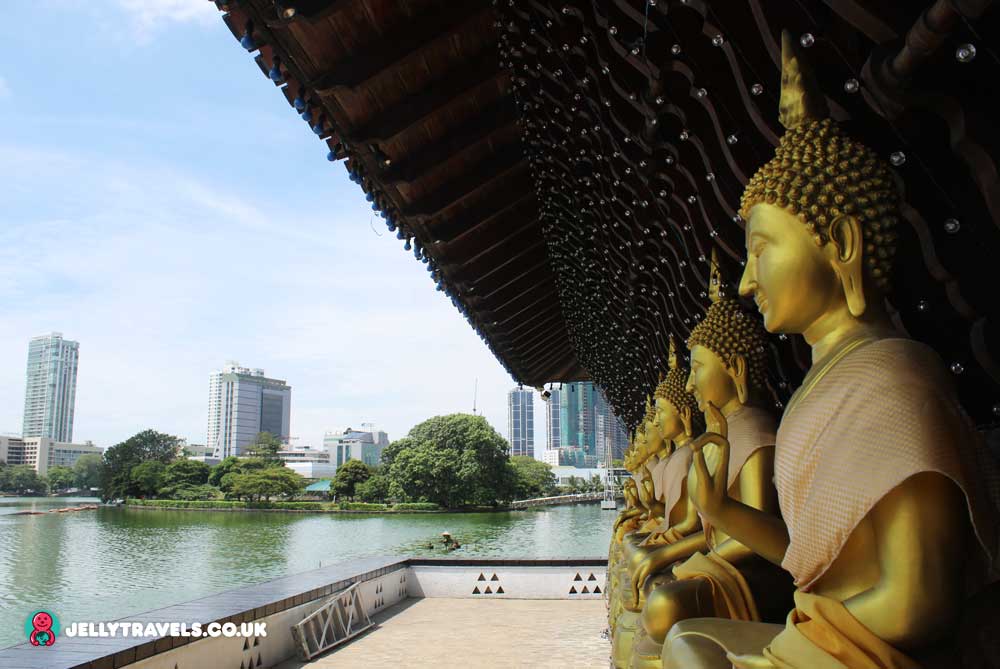 As you walk around you see a small pagoda, another buddha and different gods in doorways. A very pretty place but only 10 minutes or so are needed here.

You can see this all over Colombo as it is so tall. The closer you get the prettier it is with pink and green colouring. Its worth a photo!

Yet, we walked around the lake to get closer and found ourselves searching for an exit to get out of the walk way. It was serene walking by the lake but also a bit eerie as we passed no – one, but saw numerous benches and swings (which I did have a go on!). 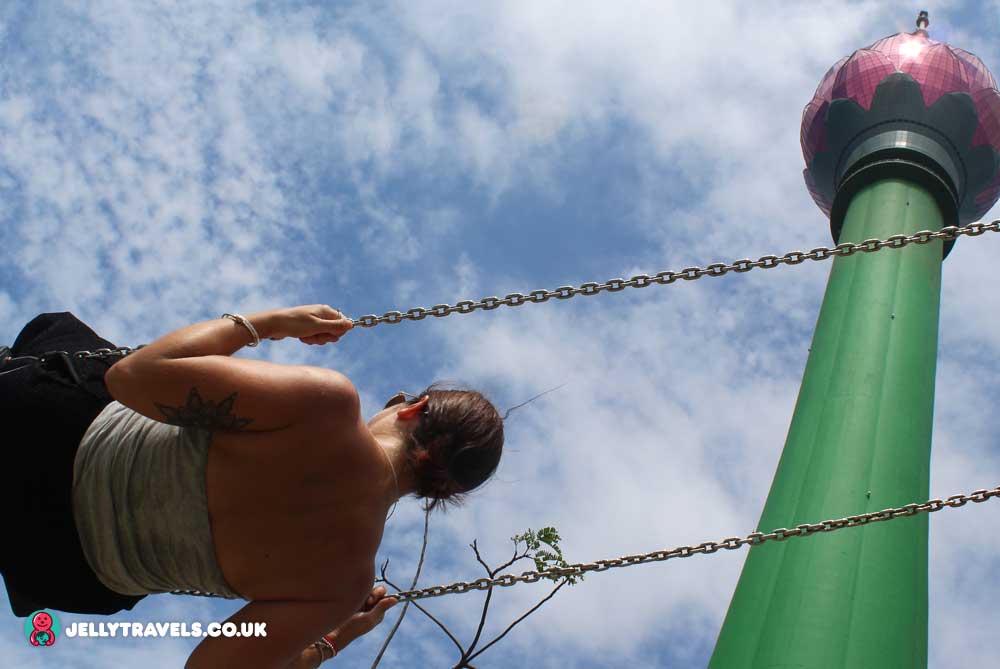 When we eventually found an exit, we had to walk completely back on ourselves to get towards the train station/floating market!

The ‘floating’ market isn’t anywhere near as exciting as it sounds! When you think floating market, you tend to think of Thailand with locals selling goods on small row boats through canals… This was not that.

It was a few cafes and naff shops around a small amount of water – which we had already seen getting off a bus (but didn’t realise that’s what it was at the time!). The only redeeming quality was the swan boats, but you couldn’t really go far on them! I wouldn’t bother personally, or just view it passing by. 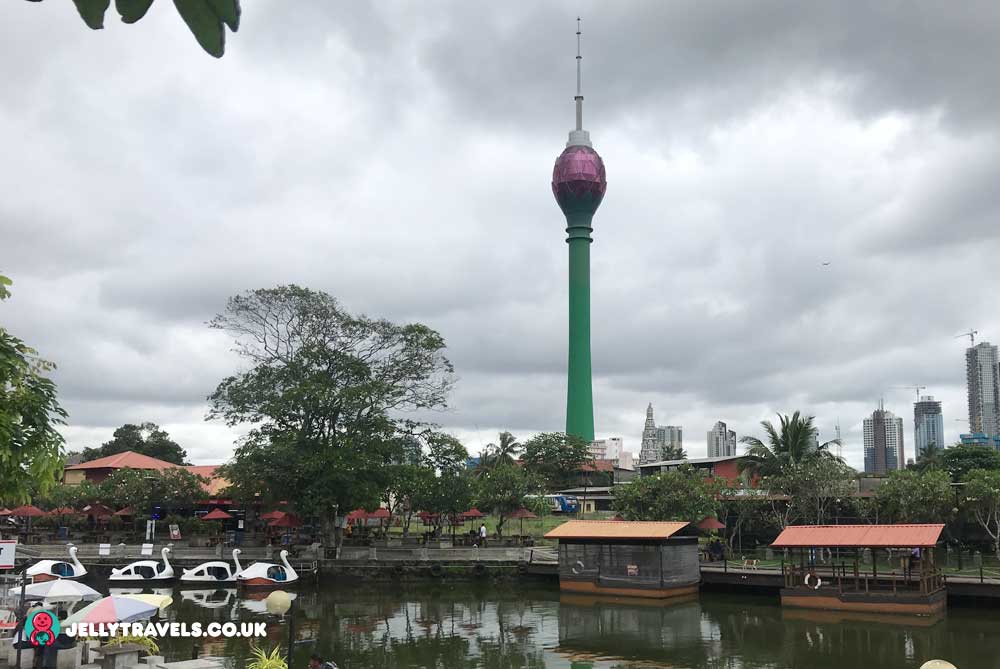 Following here, we walked past the station to another market. There were your usual souvenirs, elephant bags and clothes and plenty of male clothing. Worth a quick look if you need anything as you can usually barter the price right down.

By this point, I was getting grumpy as I felt we had been walking around aimlessly for hours without much to see. My initial positivity for Colombo was fading! James assured me this was the place to be for bars, restaurants and liveliness – he was wrong (granted, we were there in the afternoon rather than evening). There were a few restaurants including TGI Fridays and a couple of bars that played live music. There were one or 2 shops also but it was nothing impressive. Another disappointment.

From here we strolled down to the beach, past the pretty old parliament building and fairly interesting fountain. However, the beach is not really a beach – it’s a small amount of sand you cannot get down to! Although there is a lot of construction work going on there currently also.

There really isn’t an awful lot to see in Colombo, so I would advise to have it as a stop gap rather than a holiday if you decide on Sri Lanka. Kandy was by far my favourite place in terms of scenery! And the country as a whole is so beautiful and green! If we visit again, I would definitely like to go down south to beaches and see Yala National Park, but that is for another time as now we say goodbye to our joining traveller Gosia, and fly off to Thailand!