We got the bus to Dambulla from Kandy – the bus station was mad, but destinations are shouted at you so you know you are jumping on the right bus! It was super cheap (less than £1) even though we paid extra for having bags. It was a busy bus, so a tight squeeze but we had seats and it was only a 2-hour journey. The buses are pretty funky in decoration and modded out with speakers.

Where to stay in Dambulla – The Calm Cabana

We booked an apartment here after seeing the great reviews and location. We understood that it was fairly new and a little hidden away so we walked from the bus stop rather than tuk tuk – it was about 0.5 miles away.

We managed to find it fairly easily and was greeted by Sherman, the most charming host we have experienced on our trip so far! He showed us to our apartment which felt like luxury! So clean, comfortable and fresh!

We had towels, toiletries, air con and a TV (which the one evening we watched it had 80s movies playing!). Sherman offered us tea outside by the kitchen and chatted with us. He offered directions to walk to the cave temple and offered to help us with any tuk tuk transport we may need!

The following morning, he had prepared a fresh fruit breakfast with tea and coffee even though we were out early! Definitely stay here in Dambulla!

Things to do in Dambulla

We walked in via the main road to a gold pagoda, a brightly coloured face as an entrance to a Buddhism museum and a huge gold Buddha with statues of monks lining up to see. It was quite a sight! 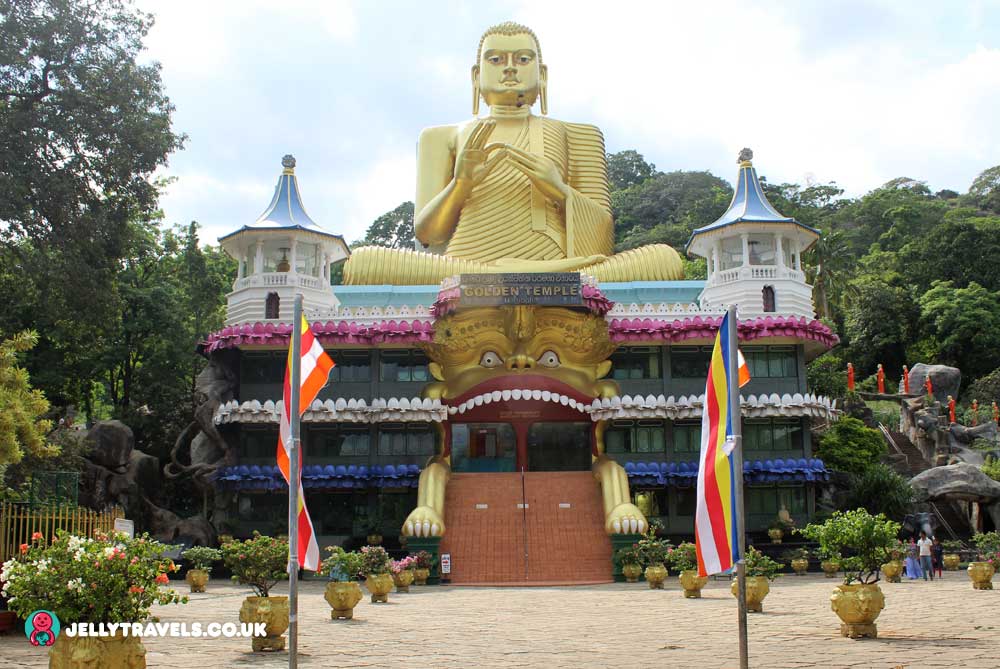 We had read not to start your assent until you have purchased tickets as you couldn’t get them at the top, but there was no ticket office to be seen! So, we started to climb, asking tourists on their way down who stated the ticket office was on the complete other side! We continued to walk up passing fruit and juice stalls, and found the sign for the ticket office. James very sweetly agreed to go get tickets and left me and Gosia with his bag as it was still quite a walk – it seemed to be in a very odd place outside the complex!

Armed with our tickets, we continued to climb up! It was rather hard work climbing all the steps but the amazing views were worth it! Greenery for days! The Cave Temple was also rather spectacular offering 5 caves with reclining buddhas, pagodas and numerous colourful statues. Lots of photos taken by all! 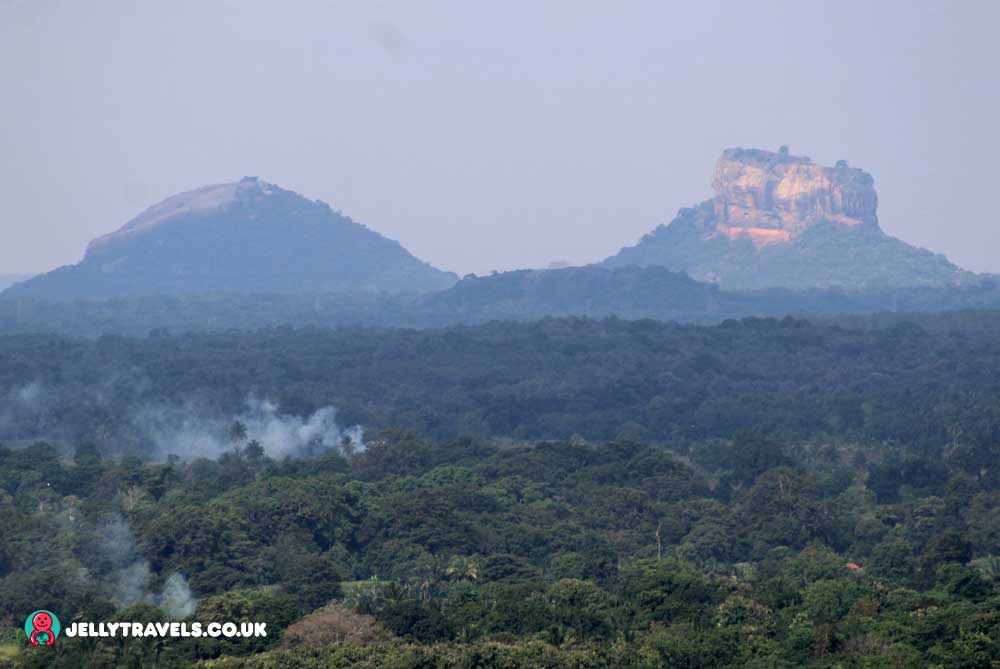 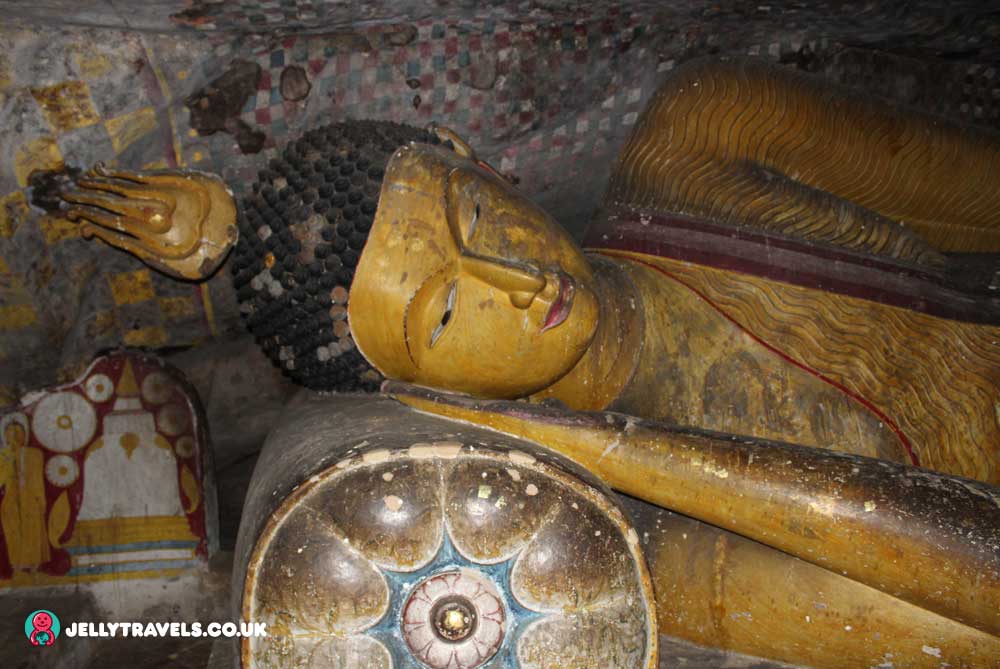 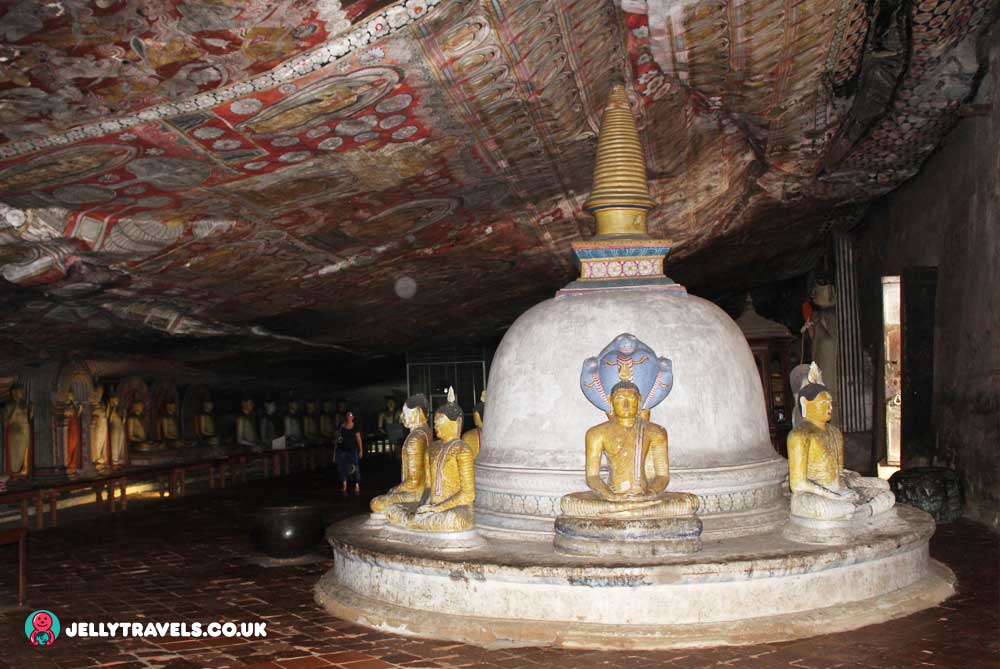 What was even more worth it was seeing James with my sarong wrapped around his legs for knee covering, being bothered by a little monkey who kept pulling on it! If you are fairly fit/don’t mind lots of steps. than this place is definitely worth a trip! Just don’t forget the giant gold Buddha at the front if you come in a different entrance! 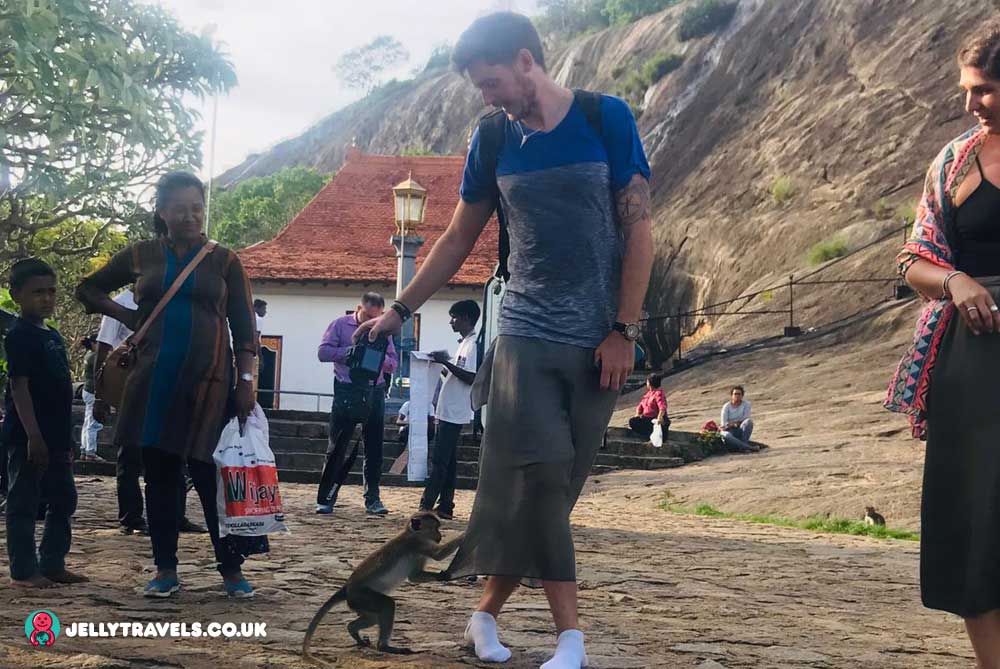 Whilst James visited the Buddhism museum, Gosia and I wandered around a small market opposite selling toys, sweets and fruit juice. We bought an orange coconut water to share – its supposed to be sweeter but didn’t taste of much to me!

On our second day in Dambula we spent it visiting Sigiriya. Sherman helped us to book a tuk tuk to take us to Sigiriya and back. The tuk tuk driver lived across the road from Calm Cabana which was helpful. He arrived at 8am to pick us up. He took us the scenic route past a beautiful lake (Kandalama Wewa) and stopped for us to take pictures – it was misty and cloudy so looked a little eerie! 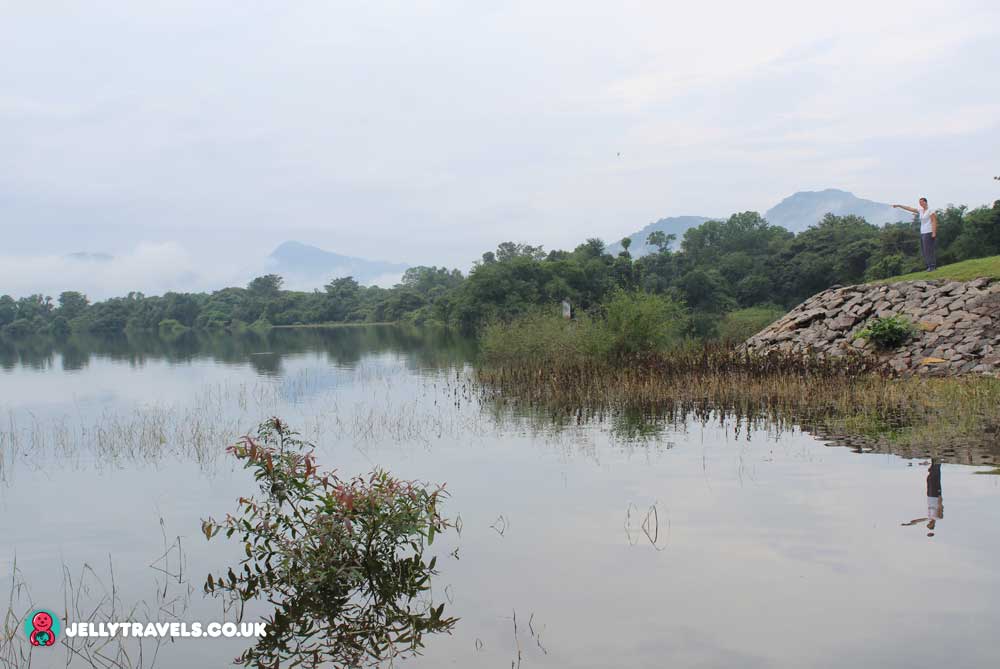 We arrived about 45 minutes later. The tickets for the rock and museum were about £25 each, I am really glad we experienced it but I still think it was overpriced! On route to the summit, there are plenty of photo opportunities of the natural wonder and you walk past small ruins and pools of water on the left and right of the pathway. 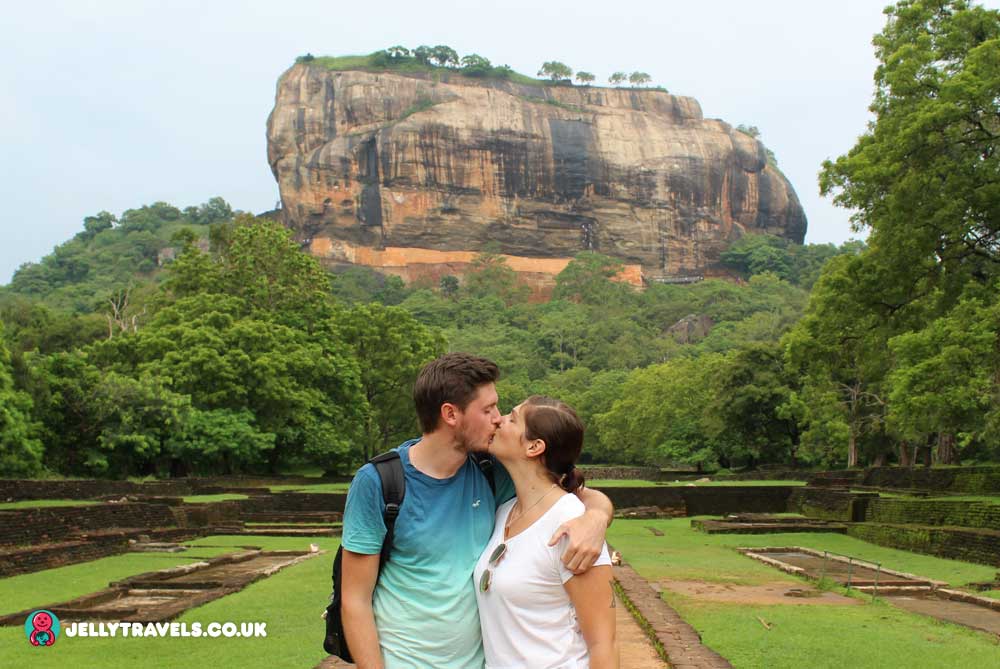 It was very overcast for us but very humid so it made the climb very sweaty! The pathways are clear cut and the steps are solid but some can be a little slippery and narrow. You walk up a spiral staircase to see the cave drawings, but you cannot take pictures of this.

There are plenty of opportunities to take pit stops and climb at your own pace. The lion feet are about two thirds up but it was difficult to get a perfect photo due to all the people and copious of amounts of selfies taking place! At the top were small ruins and a big pool of water. 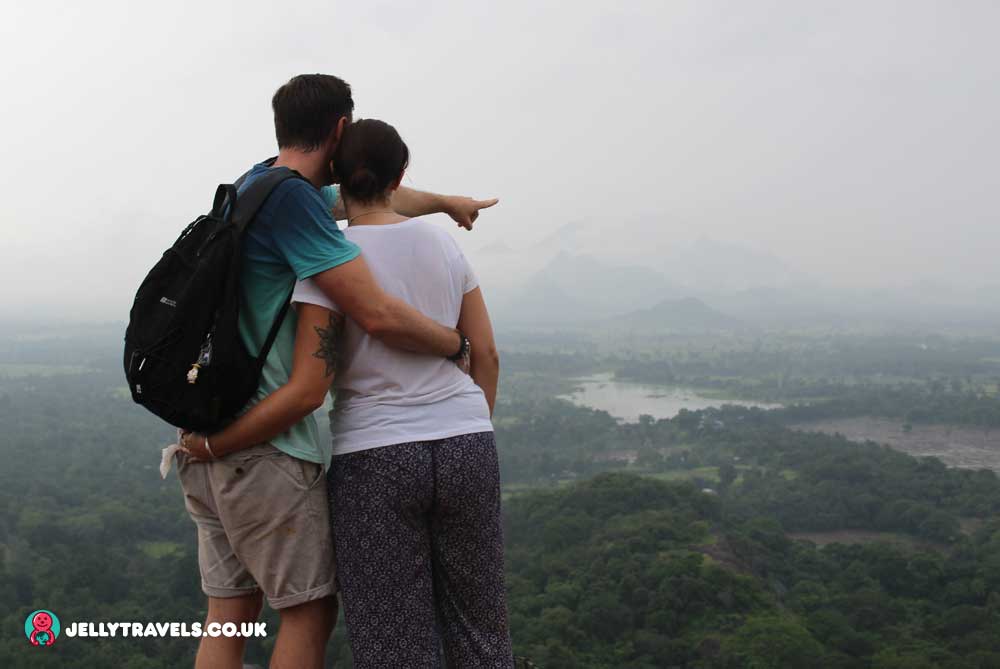 The views at the top were incredible – you could see for miles! We were quite lucky in that we had a clear view and then a really strange view when clouds started to form. As we descended there was barely any visibility at all! At the bottom, we explored a few other caves, in which James disappeared up high at one point where I could hear him but not see him! 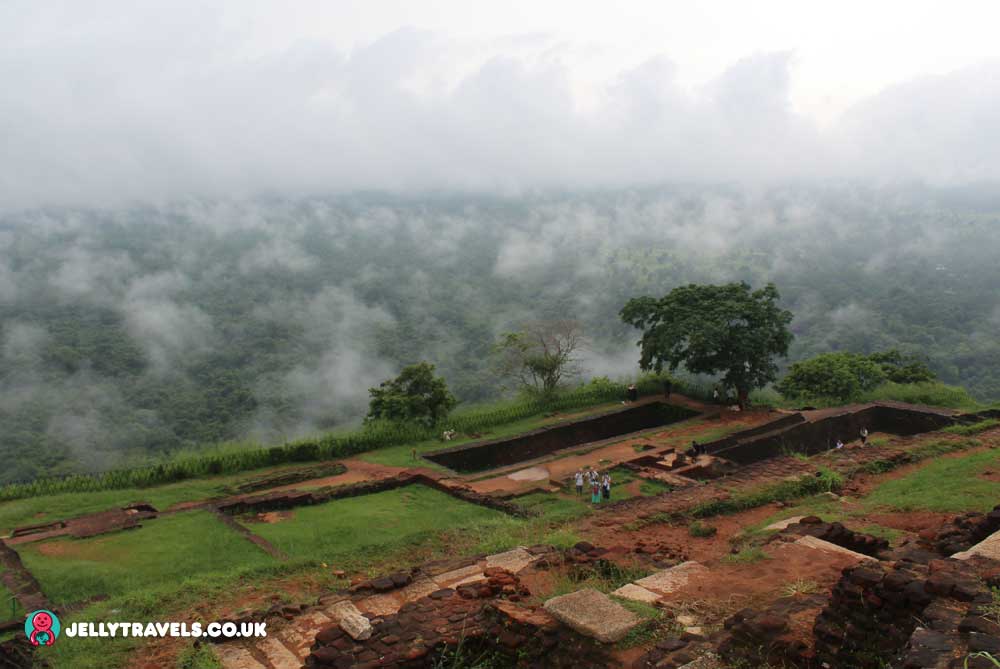 It just so happened he was on the edge of a dangerous rock wanting a photo taken, so he was a little annoyed with me.

The idea of climbing another rock was making me super grumpy – but majority voted! You could see this rock from Sigiriya rock. It was a much cheaper 300 rupees to go up, but you had to take shoes off to start as you pass a temple before the main climb.

You are given a leaflet (which I should have NOT read) explaining that the climb is very difficult, and boy were they right! It starts off as steps, and slowly dwindles into unclear pathways, boulders, and large rocks. There is a brick reclining buddha about halfway. Following this, it gets much harder with twists, turns and even jumps at times.

Luckily other people were around to grab my hand to pull me across at times. The last section however was actual rock climbing over boulders and in tight spaces to get to the top – not for the faint hearted and I am surprised I made it (and that so many others did). There was even a mother with a baby in her back! Gosia was like an expert – up and over those rocks in no time, with no fear at all! James on the other hand was more nervous about me! 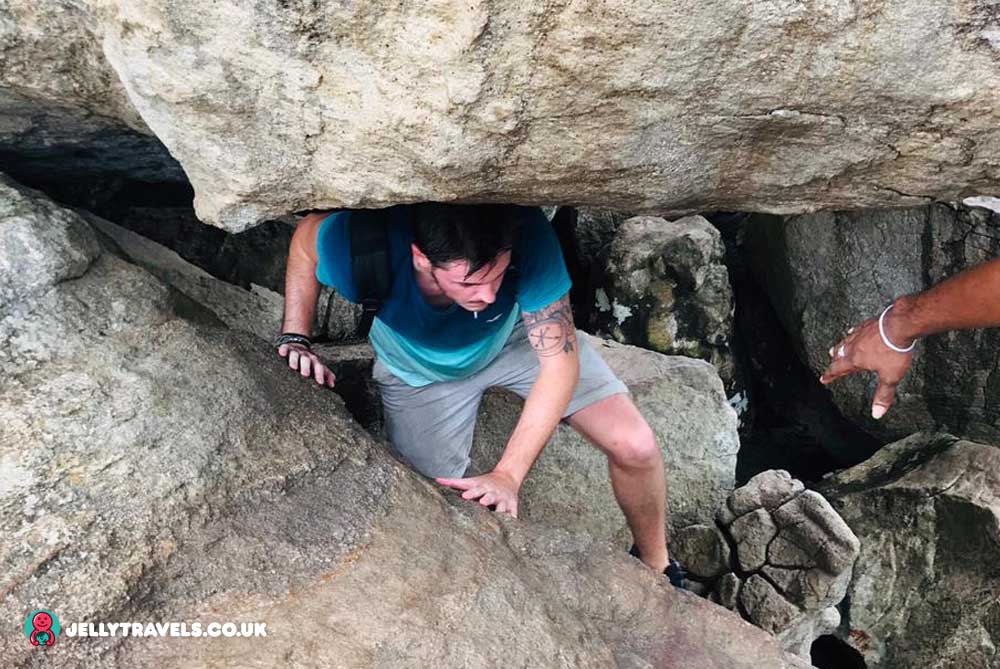 The view however was very much worth it! A fantastic view of Sigiriya Rock and surrounding greenery. We were able to get some fab photos even though I was still grumpy over the excessive physical activity of the day! 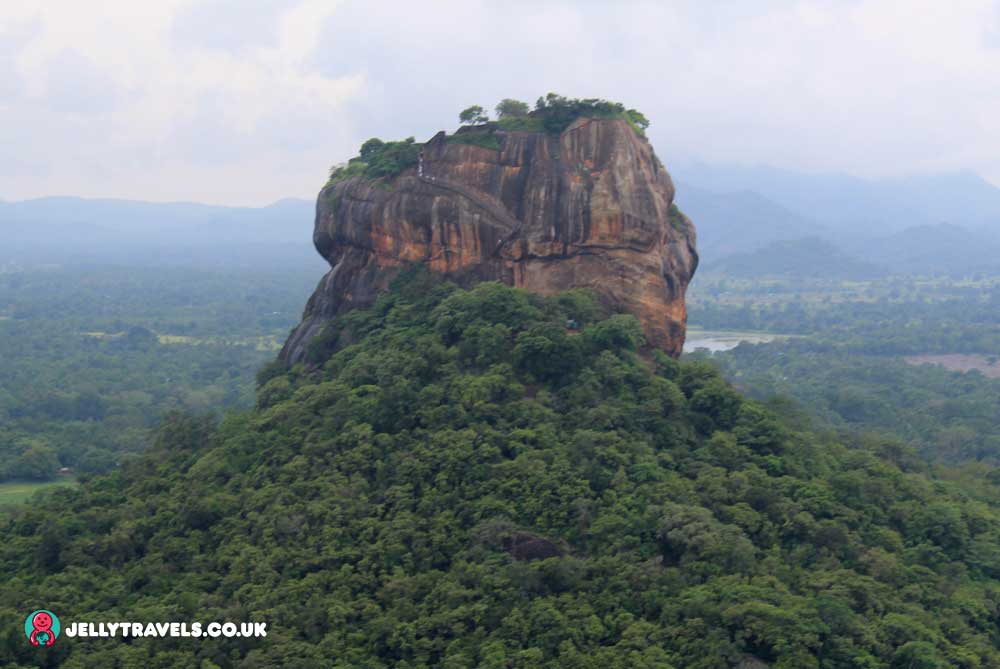 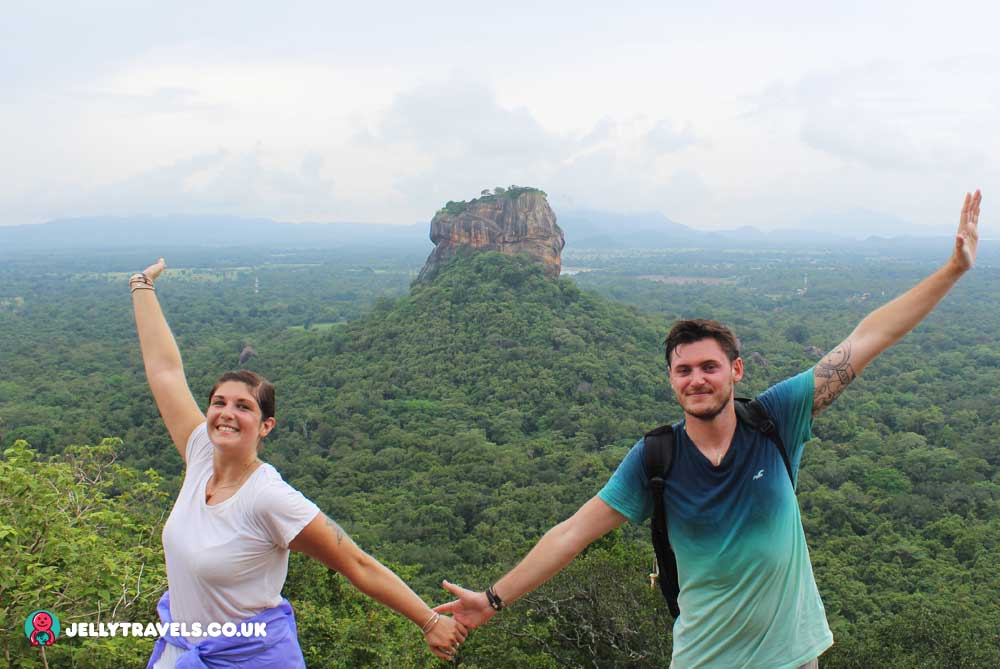 I can see why people are actually choosing this rock over Sigiriya as it is far cheaper and certainly more of a challenge. 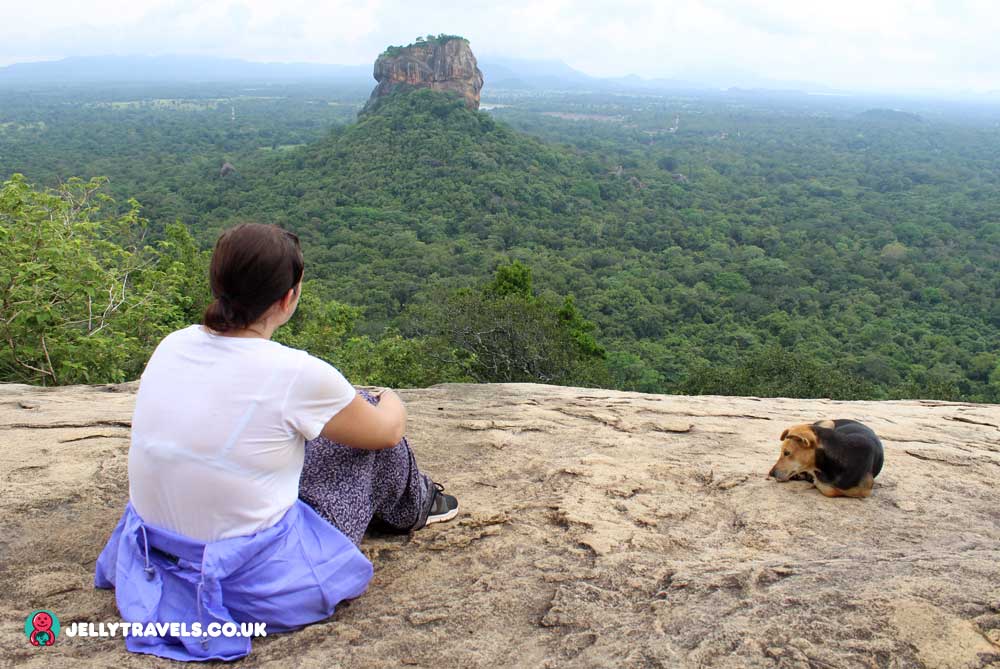 The climb down was just as scary, probably even more so! We all ended up really dirty from sliding on bums rather than risking slipping, but we did it (we stuck together and were safe for those of you who worry). I was grateful to be heading back to our apartment though, and good thing as the rain came down as soon as we were back in the tuk tuk! Magic Nights tea in order all round!

Where not to eat in Dambulla – Mango Mango

We went here to eat following Sherman’s recommendation (although there didn’t seem to be much choice in Dambulla).

The restaurant doesn’t open until 6, so we waited and were the second table in there. I am not going to say much about this place apart from I should have trusted the iffy reviews! It took over 10 minutes for someone to take our order even though there were 3 staff members and we were one of two tables.

The staff stood around uninterested. Our food took an hour to arrive and when it did it was barely luke warm. It was tasty but the rest of the experience was disappointing!

We had a superb, but busy few days in Dambulla and felt accomplished. Next onto Colombo.