Very early start to get the 8.30 express train to Kandy. We ordered an UBER from the hostel for about 7.15am to Colombo Fort railway, James found the correct counter and queued for tickets while Gosia and I stayed on bag duty. I think we paid under £1 each for the 2.5-hour journey!

On the platform we were guided to where we should stand for second class carriages and waited, speaking to friendly locals. When the train arrived, carnage ensued – everyone fought through the door to get a seat! In the commotion, I lost a flip flop down the side of the train! Good thing I had my trainers and some socks handy!

We managed to bag ourselves a seat and enjoyed the very lush and green scenery of the journey. We arrived about 40 minutes later than expected but unsure why.

At Kandy station, we were trying to get some form of taxi app to work – we were aware UBER was only in Colombo so we tried Kangaroo Cabs and Pick Me apps with no luck. We ended up paying a taxi to take us to our accommodation (which cost more than expected).

This was James’ pick of accommodation. It was a little hidden out of view (thankful to google maps!) as there was a small sign at the top of a small hill but it was situated at the bottom of a very steep slope!

The host was very friendly and showed us to our rooms. I think James and I paid for a shared bathroom, but were given a private bathroom, so that was a bonus. Room was a little old fashioned but bathroom was quite roomy and cool.

There seemed to be a couple of bed bugs here and there, and there was the incident in the middle of the night where James was adamant there was some sort of animal in our room (needless to say there wasn’t – but he panicked me nonetheless) but it was ok for a couple of nights.

However, there was some sort of festivities all night on the first night, with chanting, singing and drumming. This continued until the following day. It woke James and I at 4am, but poor Gosia barely got a wink of sleep!

Things To Do In Kandy

Temple of The Tooth

We arrived here on our first day in Kandy after grabbing some lunch. It is situated next to the lake which is a beautiful photo point. You can walk through the grounds without paying to go in the temple if you wish. The ticket price was 1,500 Sri Lankan rupees each which is about £7. 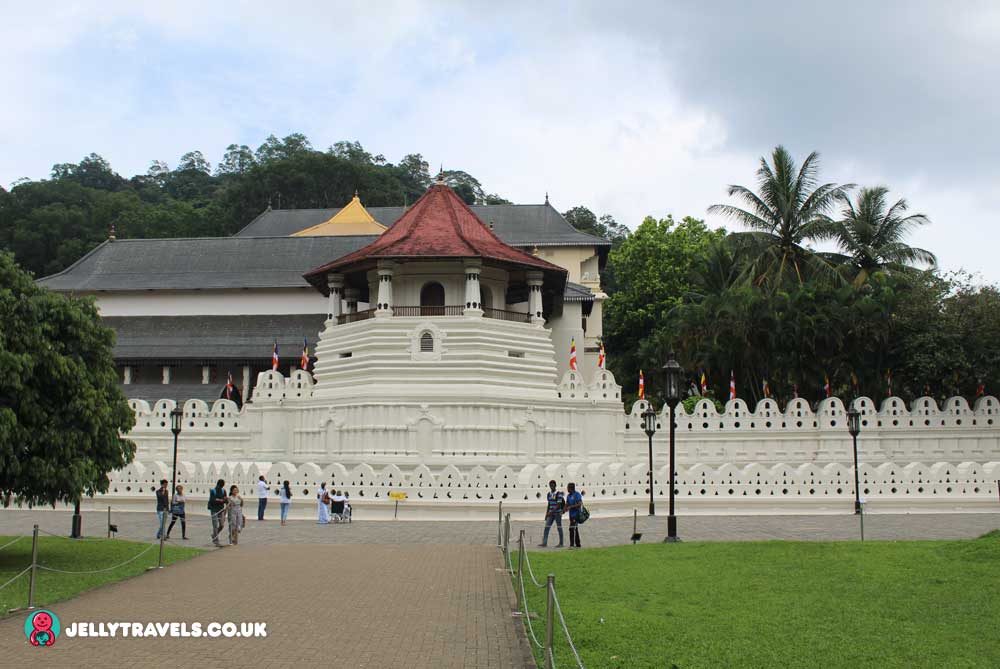 It was a calm and serene place – you can take photos but no posing or selfies! I learned that by being shouted at for jumping in one of James photos! 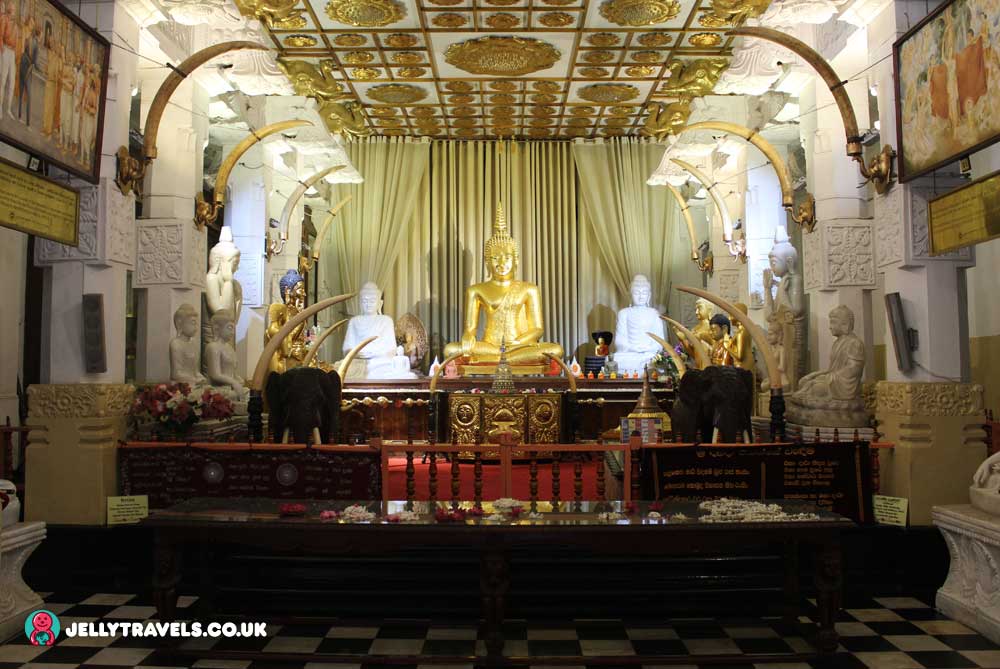 Gosia and I walked though with James lagging behind taking thousands of shots (no change there!). There were a couple of museums included in the ticket where you can learn about the story of the tooth, view photos of a previous explosion that destroyed part of the temple, see the numerous offerings given and visit a Buddhism museum with different country exhibits. It was definitely worth a visit, but I wouldn’t feel a desperate need to go again!

Around the Temple, it is likely you will be asked if you wanted to see this. The tickets were 1,000 rupees each for an hour show (5pm-6pm) so we decided to give it a go. Lots of seats were reserved for groups of people so we took 3 seats a few rows back from the front.

It started with about 6 males playing different types of drum/bongo. It seemed very out of sync and the singing very loud. The first male dance also seemed very amateur with two out of three of them following the other! However, the female dancers were fantastic and graceful and the show got better and better. 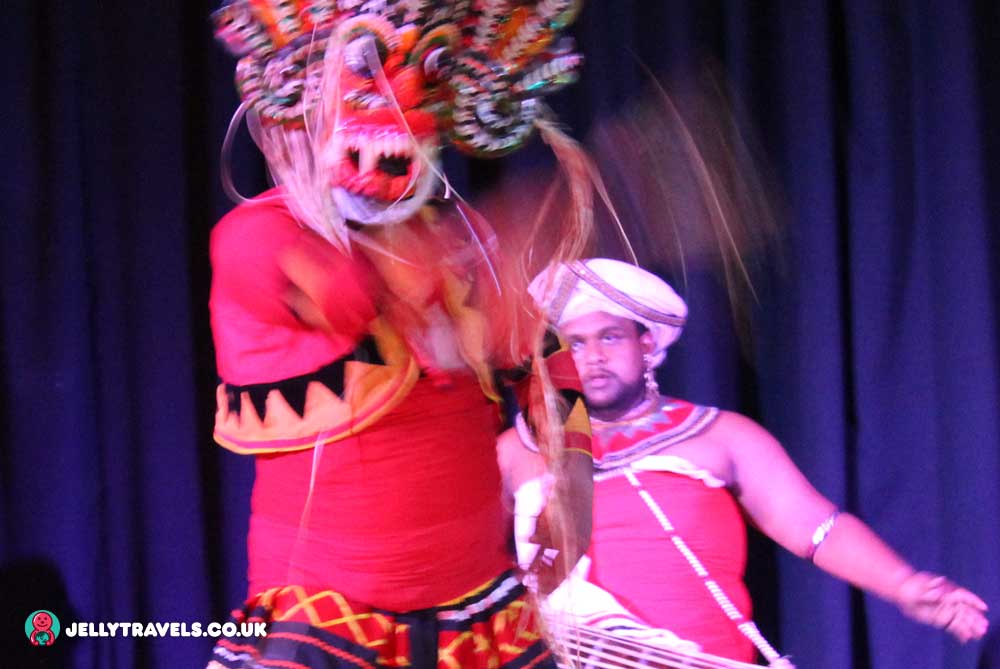 There were definitely some odd and unusual moments with masks and humping moves – but I will let that be left to your imagination! When leaving, they even put on an extra show outside of fire breathing and walking over hot coals! Worth a watch for some light, cultural entertainment!

From the lake you can see this Buddha in the far away hills. It is walkable (Gosia walked it, as she did her own thing this day), but James and I organised a tuk tuk for the whole day so were driven up there. 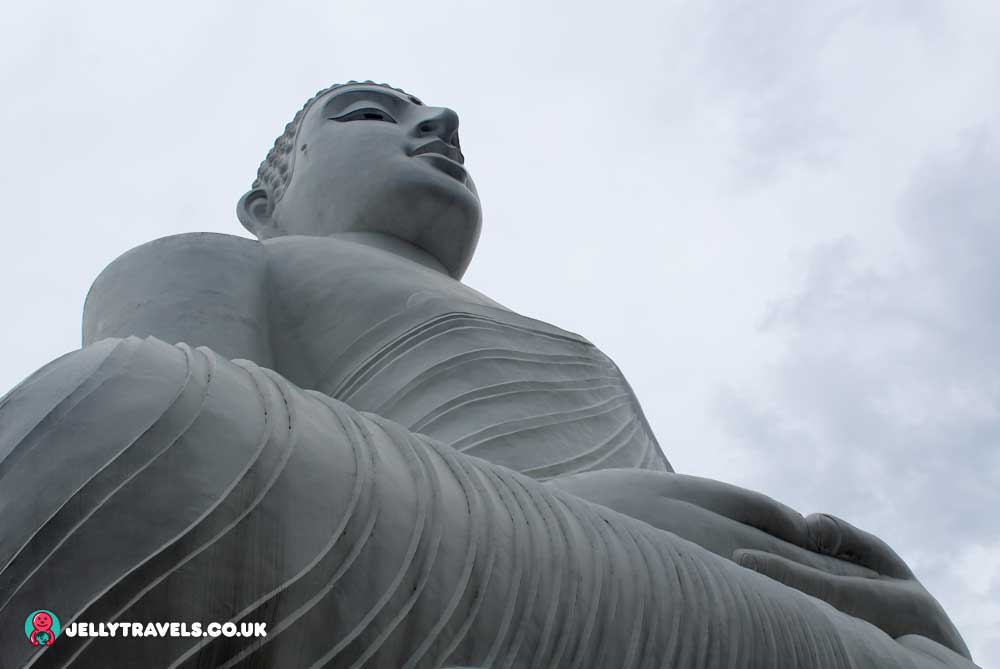 We took off our shoes and payed the entrance fee. The Buddha is huge and the views from that high up were gorgeous! You could walk up the statue to the shoulder where there were paintings inside and more views outside.

We even donated a little money to see a colourful shrine full of trinkets and gods at the back of the small complex. 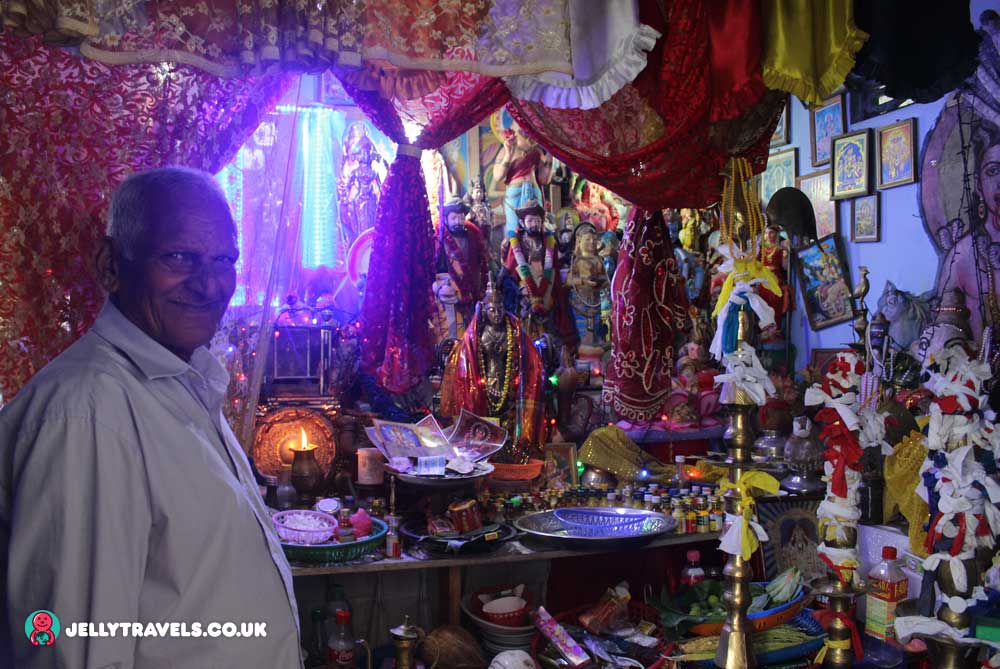 It was an enjoyable visit, but you only need about 30 minutes there.

James originally planned to see Ceylon Tea Factory and questioned the driver when he noticed we were going in the wrong direction (good old maps.me). The driver was adamant that Ceylon museum was just a factory and nothing else (even though James had read recent reviews) and he would take us to Pilimathalawa tea factory instead. James looked this up and agreed.

When we finally arrived, we were greeted by a lovely lady who showed us the (tiny) plantations situated at the factory, all the factory equipment along with explanations of how they worked and how black tea was made there. Apparently, tea bags we have in the UK are only filled with Tea ‘dust’ which is not recommended for drinking!

We were then offered a free taster session of 8 different strength teas including white tea and green tea and black tea, and taken to a modern café area. I am not a fan of tea but still tried them all. The owner came and spoke to us and allowed us to try an assortment of flavoured teas also. 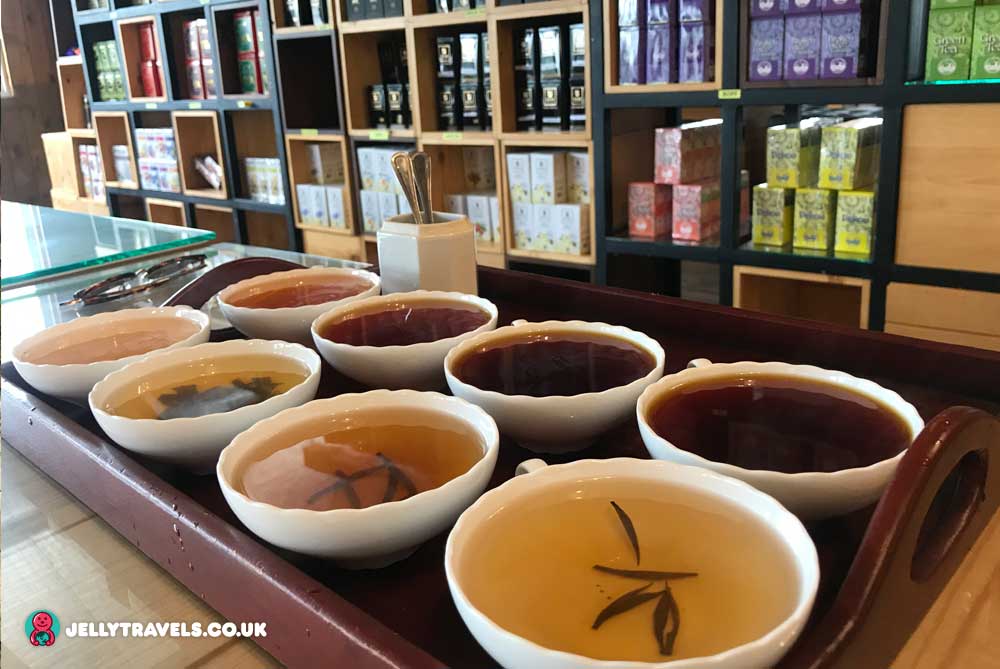 I became a fan of ‘magic nights’ tea, flavoured with cranberry and blueberry and expected to aid sleep (although did the opposite to me as I do not drink a lot of caffeine!). We decided to buy some for Gosia as she did not join us and the owner agreed for a smaller amount to be weighed out for us to buy as we didn’t want a large amount as packaged. For a non-tea drinker, I really enjoyed this experience and may have even been converted to fruit tea at least!

This place was about an hour and a half from Kandy. On route we saw 2 porcupines on leads like pets, random inflatables and goldfish in plastic bags at the side of the road – so a worthy journey! 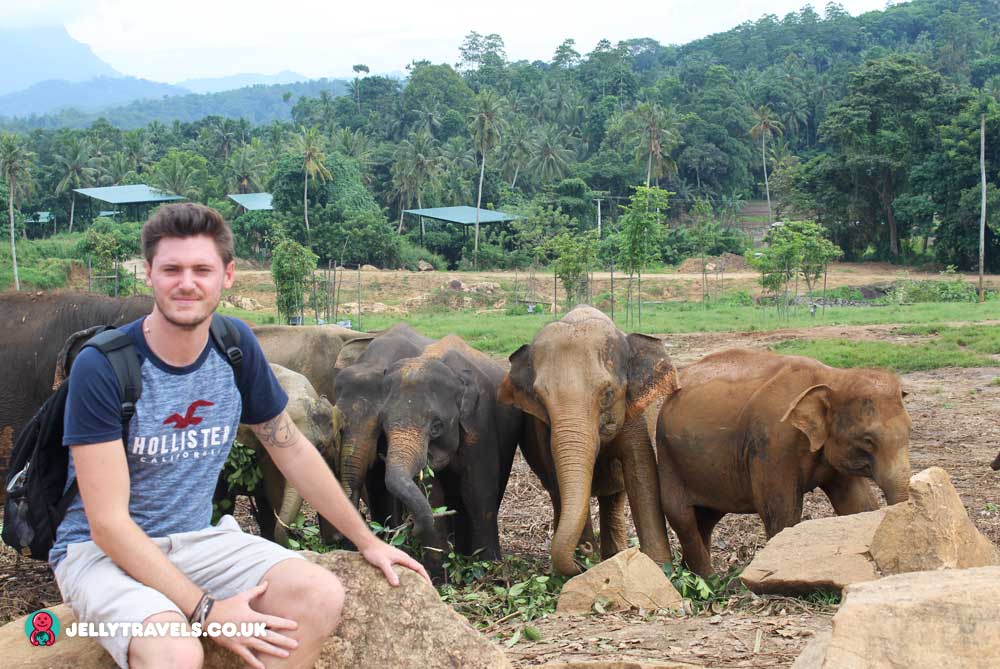 James really wanted to see the elephants, and after my Thailand experience, I was more than happy to go! James and I wished to go to this place as it were an ethical elephant sanctuary. We were asked 3 times by our driver if we wanted to go to Millennium elephants where you can ride them. We made it clear we didn’t agree with elephant riding but he continued to ask and stop off outside (the word commission jumps to mind). 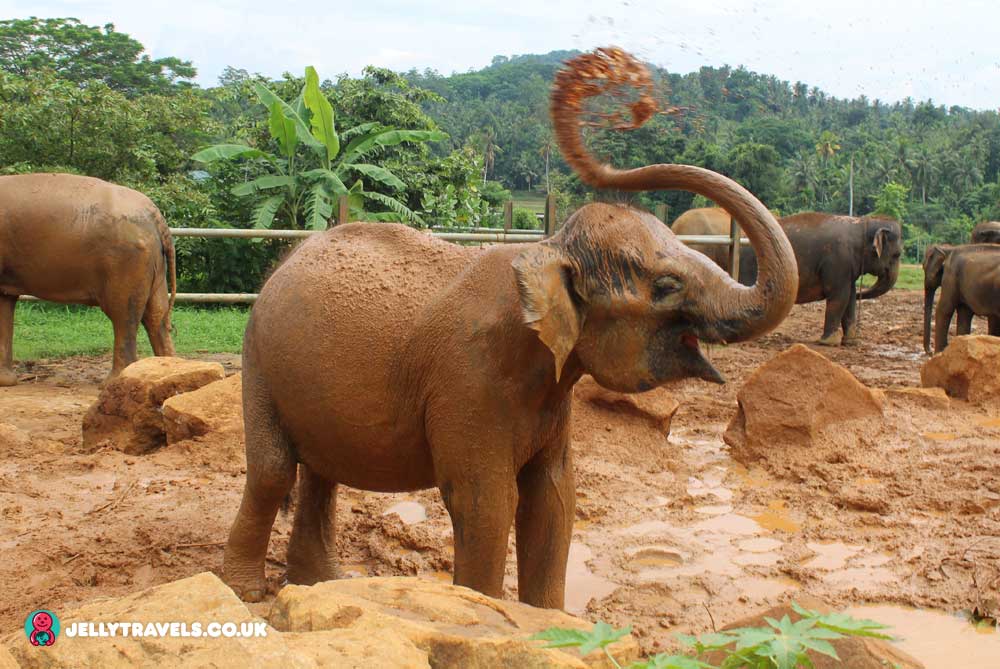 At Pinnewala, you can still feed the elephants, watch them roam (and have mud baths) and witness bath time! You can take plenty of photos and get up close! Some did have chains on which made me a little uncomfortable but there were signs up explaining why. We were able to get so many great shots of the beautiful creatures and get up close and personal to them. So cute! James was super happy! It was lots of fun for a couple of hours! 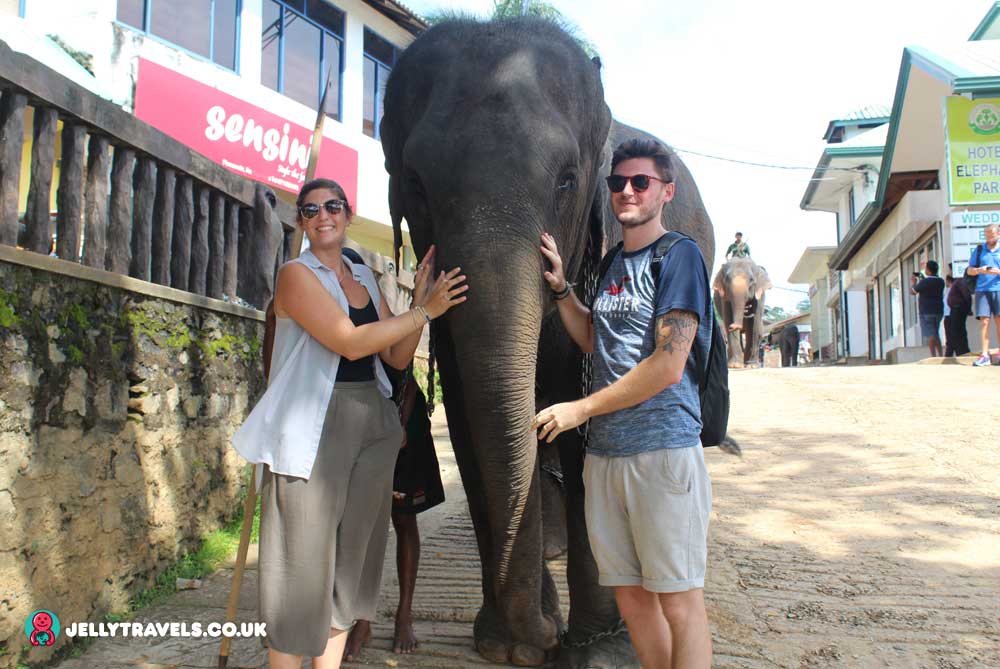 All in all Kandy was a beautiful tranquil place built around a lake. Being central in Sri Lanka it is easily accessible from most places, so well worth a visit.