The short taxi ride from the airport gave us a good first impressions of Madurai. It seemed very colourful, vibrant and not overly busy. The local people were very friendly and welcoming.

Where to Stay in Madurai

The options of accommodation seemed quite limited when we looked online a few months back, however after paying a little more we were very happy with our choice. At £7.50 each a night, this was our most expensive stay in India.

We had our own private room and the place was very clean, a big step up from our hotel in Chennai. We were even given a load of toiletries, – the small things hey? But this was a pretty big thing for India.

The room was located only a 10 minute walk from the main Meenakshi Amman Temple and situated on a lively street full of shops and restaurants etc.

Places to Visit in Madurai 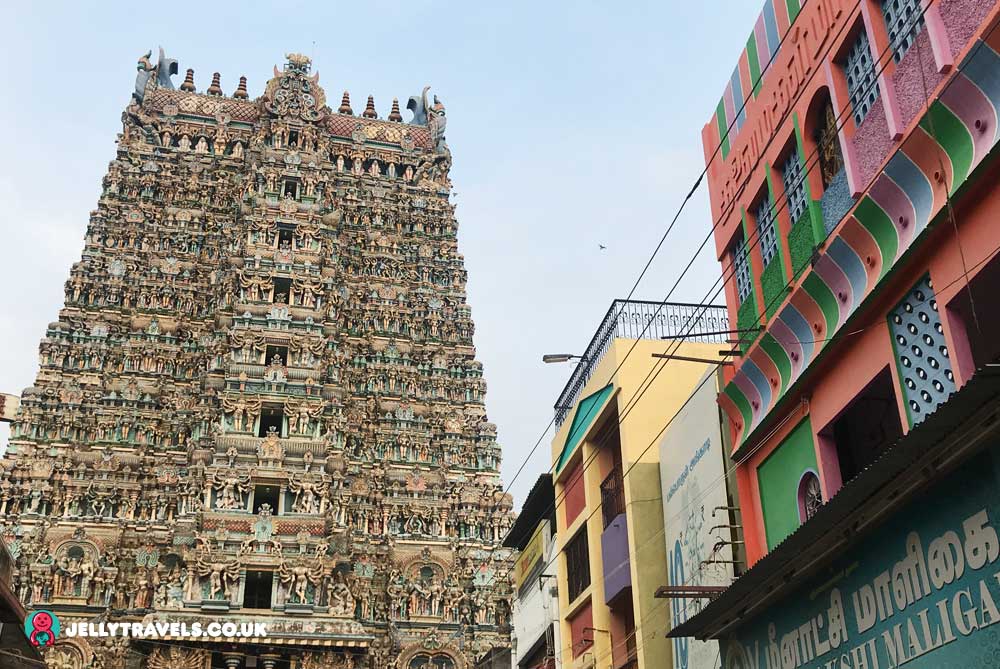 There are lockers at each of the 4 gates around the complex. You also need to be dressed appropriately of course. 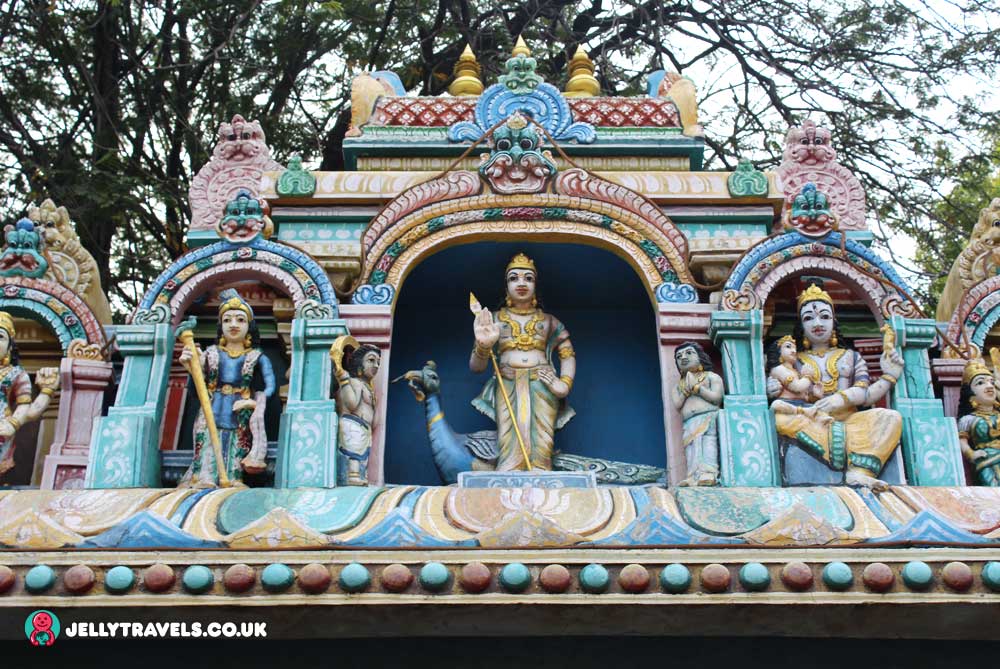 Inside the temple it is absolutely stunning. You are greeted by a shiny gold pillar and so much colourful decoration on the ceiling and walls. The temple holds the shrines of Meenakshi and her consort Sundareshwar, but these access to these are for hindu’s only.

Well worth a visit!

The walkway to the temple is pretty awesome too… 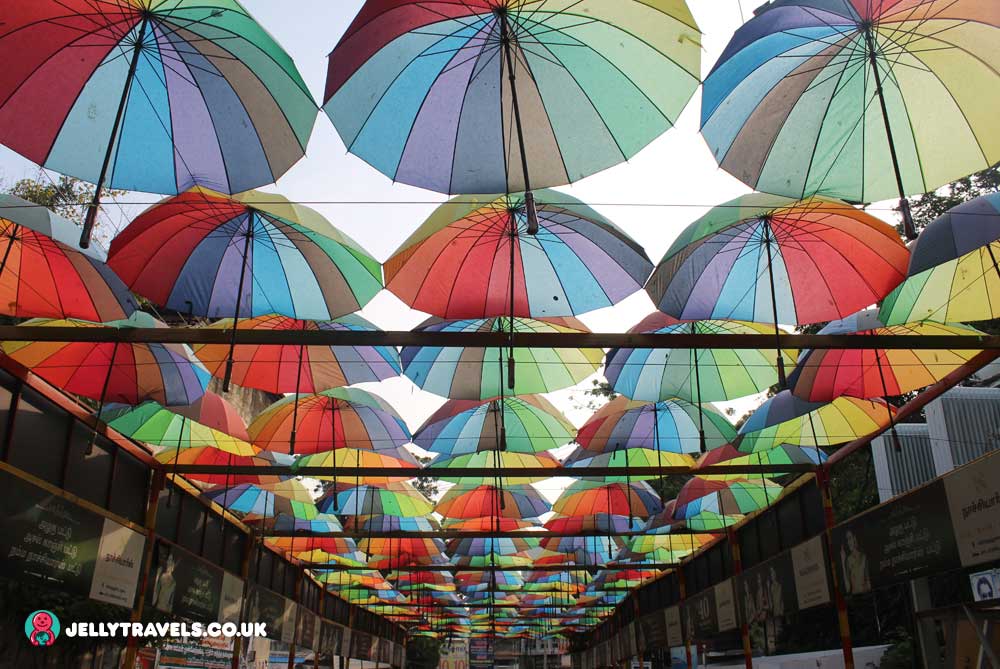 This is inside the temple complex and cost 50rs each for a foreigner ticket. It was an interesting 30 minute walk around finding out about the history of the temple complex through archived photos, comic strips, statues and small scaled models of the complex.

And of course the whole museum is layed out between 1,000 pillars which was pretty fascinating.

I visited this night ceremony alone, as Kelly was done for the day. I actually saw more westerners here, than I had throughout our whole entire stay in Madurai, and there were only about 15!

The ceremony started at 9pm, even though I was told 8.30, so I ended up waiting a little. I stood with the other westerners, as we were not allowed in the Hindu area where the shrines were placed.

This ceremony had a similar feel to that in Varanasi, however on a more close and personal scale. I followed the lead of the other tour groups and listened in to the best spots to stand. There were 4 spots in total to witness the ceremony take place.

The ceremony involves the journey of the Meenakshi shrine to be placed next to the shrine of Sundareshwar for the night. It involves the sound of bells, long trumpet, guys carrying pitchforks with fire and a guy wafting scents over the shrine.

It means a lot to the worshippers as they all rush in to get the best spot for the ceremony and pay their respects before the move of the shrine.

It was quite a scene seeing all the westerners tumble across the temple, following the tour guide to get to the next spot for viewing, as the shrine made its way through.

View of Meenakshi Amman Temple from a Museum Shop

When we arrived at our hotel we had an evening stroll to get our bearings and reached the Meenakshi Amman Temple – it’s pretty difficult not to spot it! We were immediately guided by a local towards a ‘museum’ (a shop) which had a rooftop overlooking the temple complex. We were happy to pursue and to be fair we got a fantastic night view of the temple lit up at night. Annoyingly Kel got better photos! 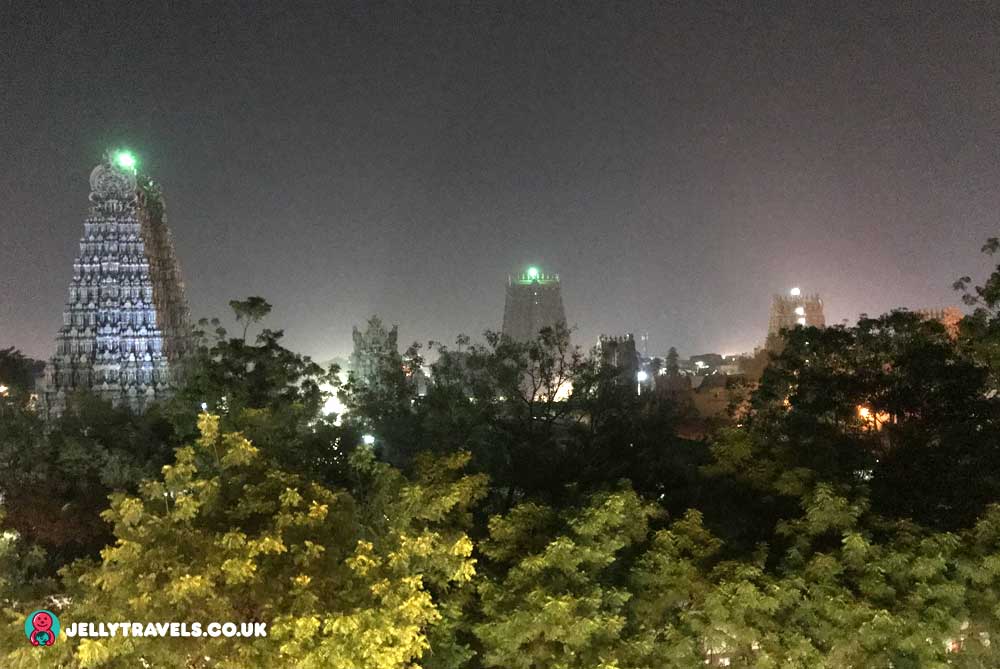 After our viewing we were slowly shown around each floor of the shop and constantly asked if we’d like to buy. We were glad to see the exit, but it’s definitely worth using these ‘museums’ for there views. The museums sell a mixture of paintings, fabrics, ornaments and gifts. Something you grow accustom of seeing throughout India.

We visited another museum shop on the second day to see the temple in daylight. Take advantage of these spots, and don’t be pressured into buying! 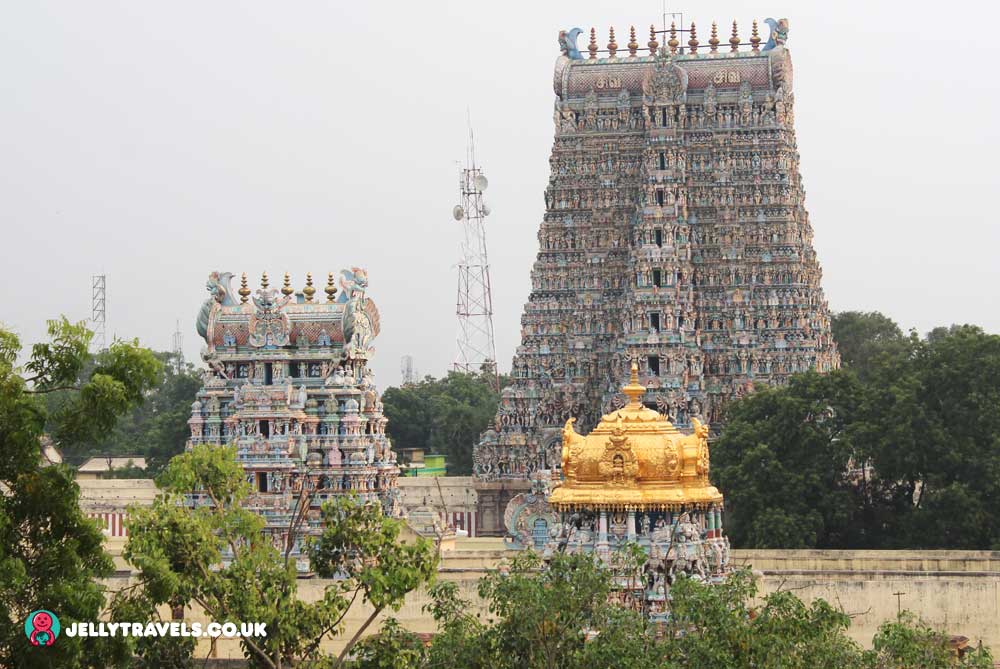 This was a little way out from the temple, across the river, but only 100 or so rupees on a tuk tuk. And it is definitely worth the trip! 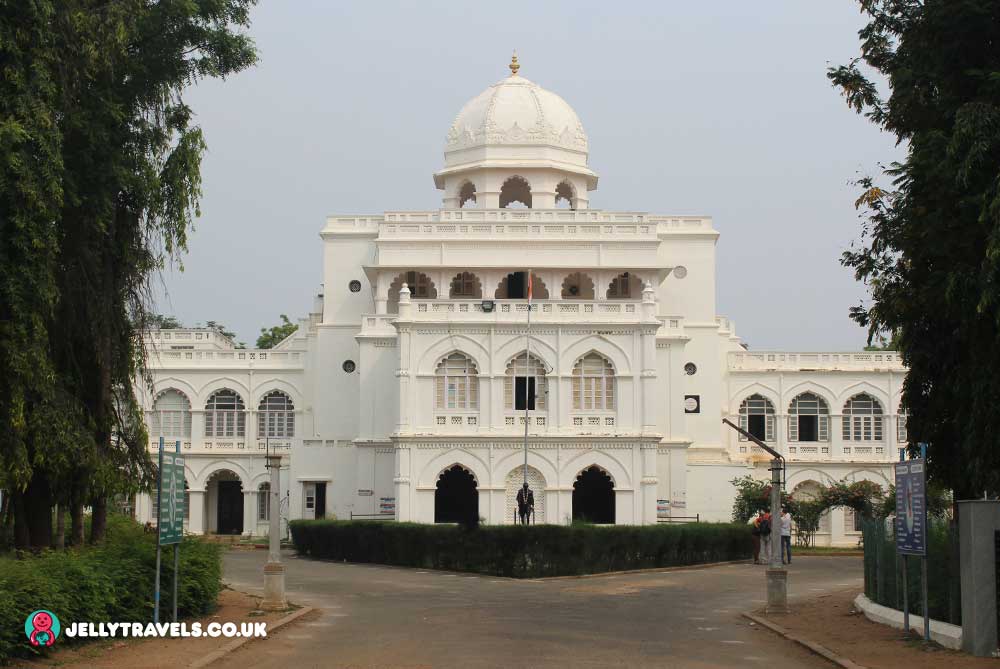 Me and Kel spent about an hour reading up on the history of Gandhi – what an intelligent man, no wonder means so much to the people of India!

All of a sudden we heard a very loud noise coming from the entrance, to then be bombarded by a large group of school children who were so chirpy and chatty. They were all very polite and said ‘hello’. Kelly was then the centre of attention for 10 minutes, as they all posed for photos and tested their English. 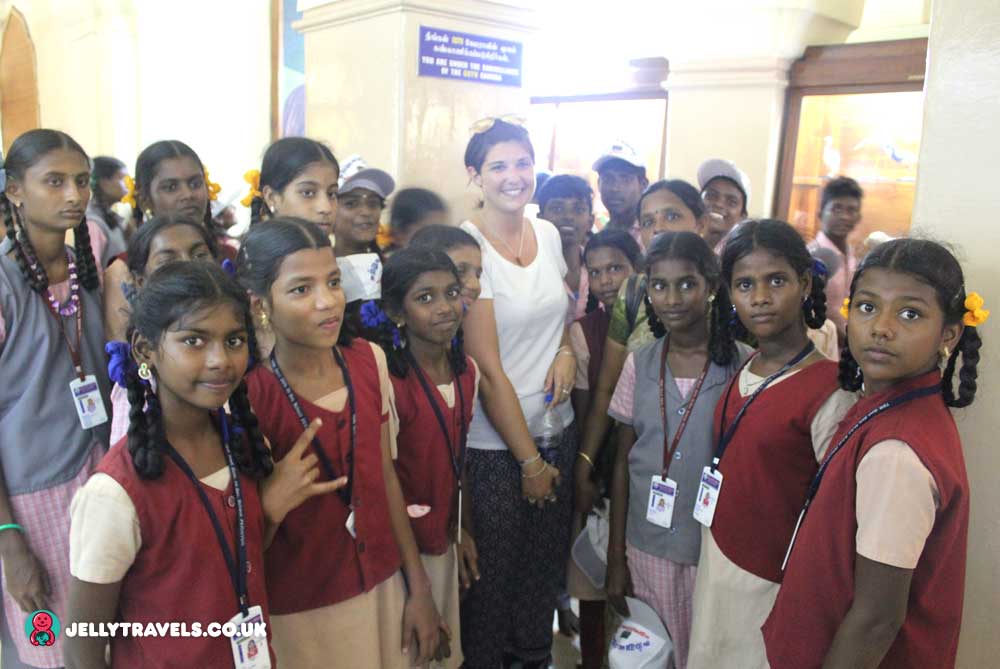 We even then had 3 of the young boys leave the school group to come find us for a photo. It was quite surreal. 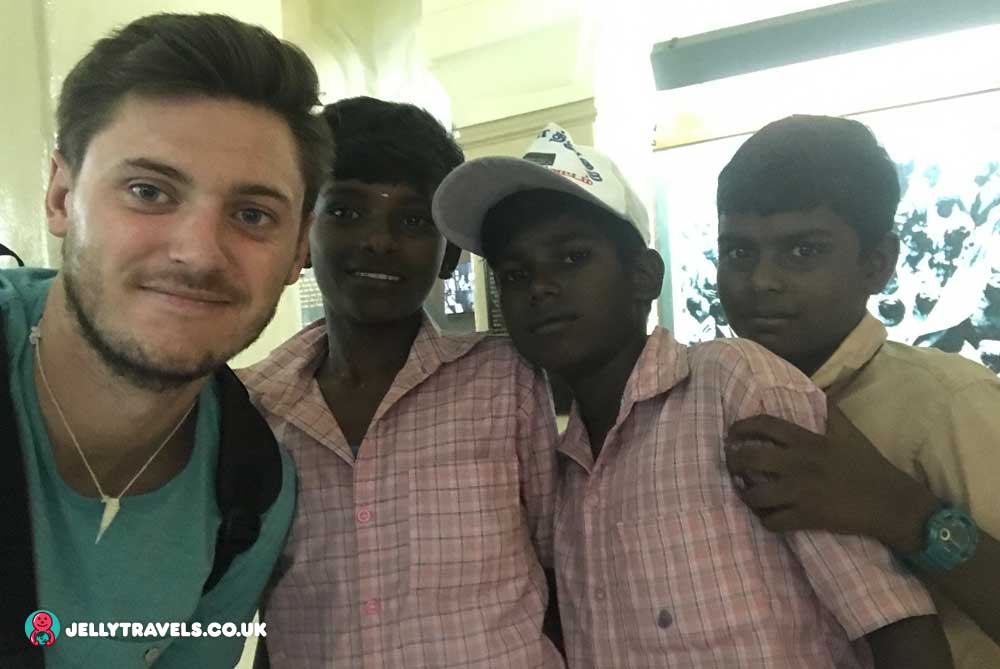 The museum housed many artifacts from Gandhi, including his blood shed robe and many different utensils, letters and accessories. 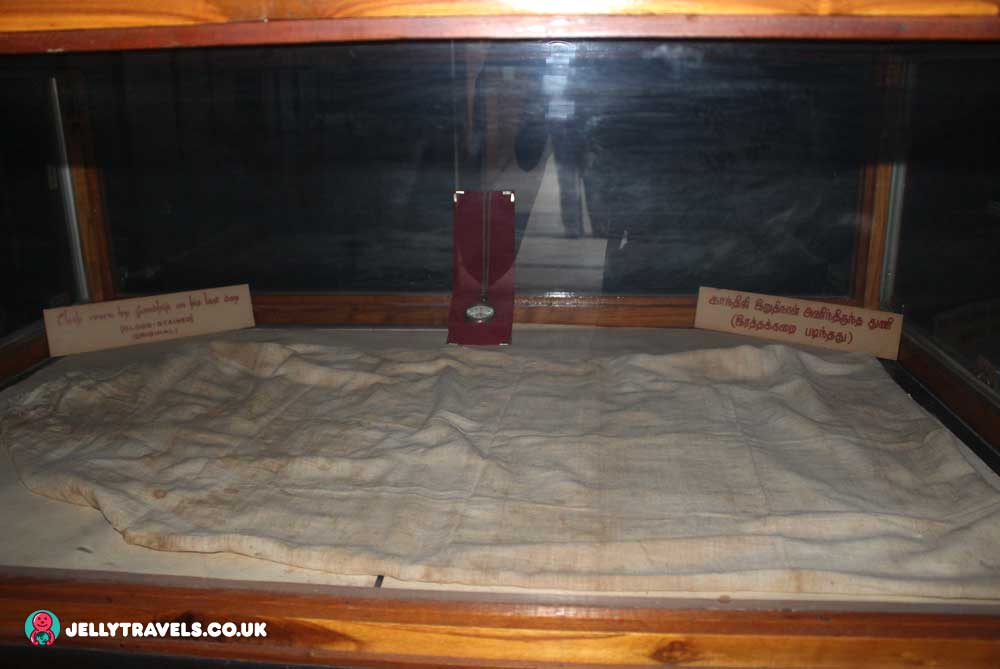 Even better, the place is free to enter. You just pay a small fee if you wish to take photos, like me!

Where to Eat in Madurai

There were many places we ate, but this place took our top spot. Situated around the corner from our hotel, and rated highly on TripAdvisor, Sree Sabarees did not disappoint.

We were a little unsure on arrival, as the place sells street food from the front kiosk too, and it was very busy. We were however welcomed warmly and sat down as the only westerners in the joint. We watched the Indian people eat with their hands off leaves around us and kind of wondered what we had got ourselves in for. 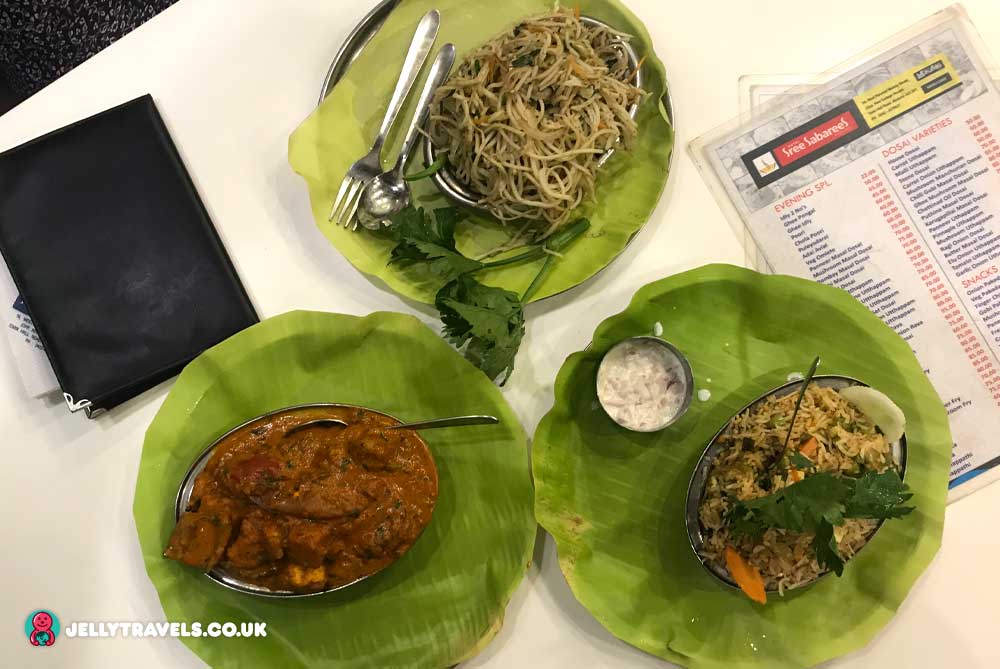 The menu was in English, but it was still difficult to understand what everything was. So we stuck with stuff we did understand – we ordered Paneer Masala, Paneer Fried Rice and Veg Noodles. Luckily it arrived with spoons and forks. The presentation was superb and the tastes were delicious. All for only 310rs (£3.20) and we even took home a doggy bag.

We did however have an audience whilst eating, and a girl wanted to grab a photo of us whilst we were eating.

Should I Visit Madurai?

If Madurai isn’t part of your trip to India then I think it should be. It’s such a colourful and vibrant place, and you won’t see anything like the Meenakshi Amman Temple anywhere else – and we thought we were done with temples.

You only need 1 or 2 days here, and we’d recommend it over Chennai anyday if you’re comparing the two.

A great end to a month long India visit. Our trip now takes us to Sri Lanka for a week.