So I managed to convince Kelly to change our trip itinerary up a little, replacing a 2 night stay in Agra (after hearing bad reviews from other travelers) with a 2 night stay in Varanasi, and using one of our free days in Delhi to take the trip to Agra for the mighty Taj Mahal. And for my sake, the plan seemed to work…

The two hostels we had in Delhi both offered transport to the Taj Mahal, one at 2,000rs each and the second charging 10,000rs for a private car. I knew the trains were cheaper and just as quick, so I felt this would be a good experience, even though Kelly was opting for the private car option!

Getting train tickets proved quite difficult. We tried online, but didn’t yet have an India sim (you need an Indian number) so this didn’t work. Our next option was to get a ticket from New Delhi train station, however on arrival we were pestered by many touts and told to go to various ticket counters which was confusing, and it was too late in the day. We didn’t wish to get scammed so we got our hostel to book these tickets up for a small fee. However be quick with booking tickets, they sell out very quickly and we had to change from a Sunday to a Monday. Book 2 days in advance at least.

We really wanted to see sunrise at the Taj Mahal, but the earliest train possible was at 6am getting into Agra Cantt at 7.57, so we dealt with this.

Leaving for the train station at 5.20am was a scary experience. The streets are pitch black and the locals are only just starting to arise for the day. Somehow we interrupted a dog (and his friends), to find ourselves speed walking with a pack of several barking hounds at our heels. It must have been a territory thing, as they eventually stopped, however we both knew a bite on the leg would have ruined our meticulously planned day trip.

When we got to the train station we needed to go through to platform 1. If you are unsure on anything, speak to the security guys/girls in the cream uniforms. When we arrived we presented our tickets to a guy who looked legit, however he told us that our train was cancelled and we’d have to buy a new ticket at another window. At 5.30 in the morning this isn’t what you want to hear, but we got a second opinion of our ticket from the security guard who told us otherwise. When we turned around the scammer had disappeared of course.

The train itself was very comfy and you get handed a newspaper, large bottle of water and a tea with biscuits. The journey itself was an experience, as you see many Indians walking the tracks to get to work and people going about their morning routines from the many slums dotted around the train tracks. With the sunrise in the distance, this was pleasant trip.

On arrival we were approached by many touts trying to sell us the lift to the Taj. There is a pre paid taxi booth, but they were charging around 300rs. We ended up agreeing a 100rs fee from a lone tuk tuk driver, although he did initially want us to pay at the booth beforehand, but we said we’d only pay on arrival. This is something you should always stick with!

The driver was great, but he really did want to sell us the day of being our chauffeur and stopped on a number of occasions to show us his guest book of reviews and newspaper articles on his good deeds. The cost however was 1000rs for around 4 hours, which we bartered down to 800rs, but we were only willing to pay 500-600.

We arrived here around 8.30am, to be handed FREE bottles of water and shoe covers. We then had to place our bag of food in the lockers at a charge of 20rs. Compared to when we left, the place was a lot quieter at this time, so we’d certainly recommend getting there as early as you can to beat the tours, which normally arrive from 9.30am onwards.

The Taj Mahal did not disappoint. Walking out to see the Taj Mahal in flesh for the first time is a great feeling. It’s always been on my bucket list and the shear size of the palace is evident at first glance! It really does feel like you’re dreaming and feels very romantic.

There’s an initial platform with railings that looks head on to the Taj and it’s grounds, where everyone is fighting for the centre spot. We only waited 5 minutes to get ours.

Walking towards the doors of the Taj Mahal there are seating areas to the sides which give you great photo opportunities, and allow you some time to be creative… 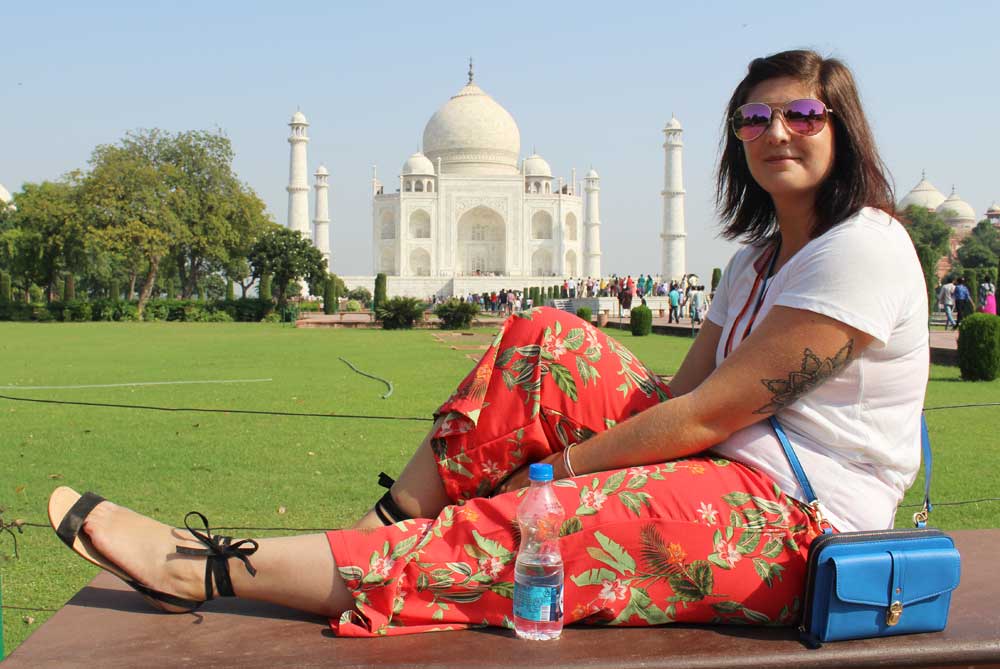 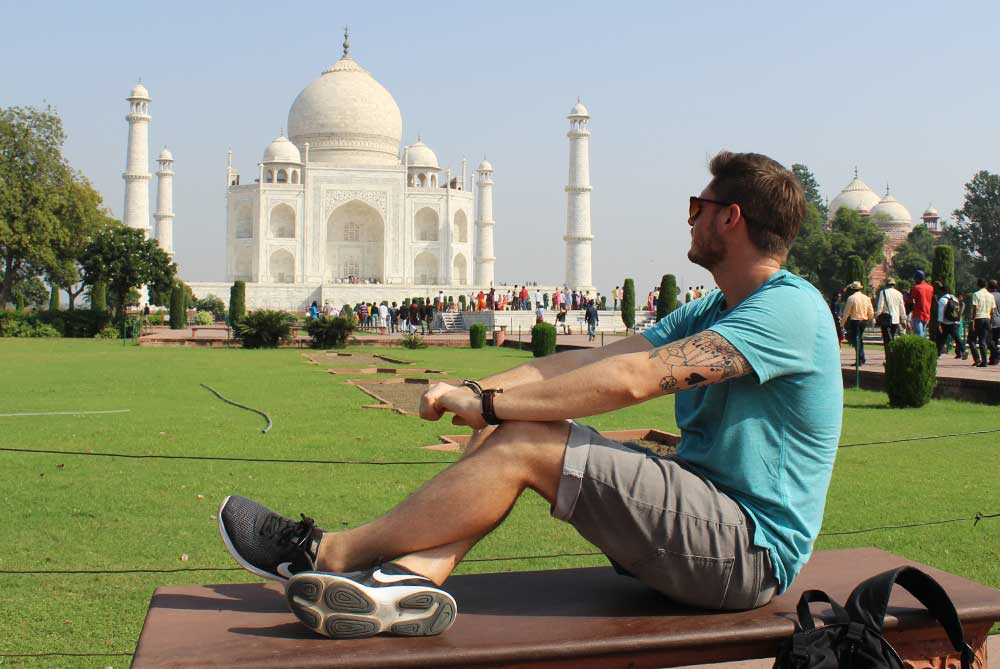 There is also a seating area on the centre platform that is the perfect spot for a romantic photo. Unfortunately tour groups with their own professional photographers come and go every few minutes, so it’s difficult butting in and they ‘shhh’ you away if you even get close to ‘the bench’. We waited about 20 minutes, before I actually said something and ended up getting a professional photographer to take photos of us with my camera. It was so worth waiting for, even if Kelly had asked to leave about 5 times, I was adamant to get this shot of us. 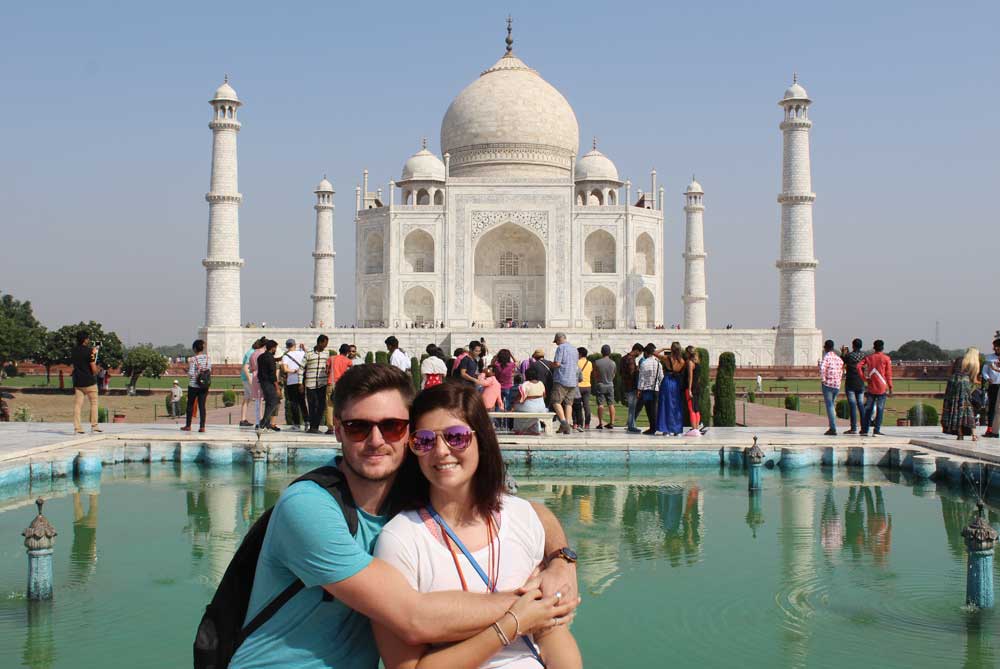 We later found out that this wasn’t ‘the bench’ used by Lady Di and Kate & Harry, it’s the one behind it. But it was good enough for us.

The rest of the grounds are stunning, and when you head up to the platform holding the Taj Mahal, there is a mosque on the left hand side which is quieter than that on the right, and gives you better photo opportunities, with less people, as you have to remove your shoes. 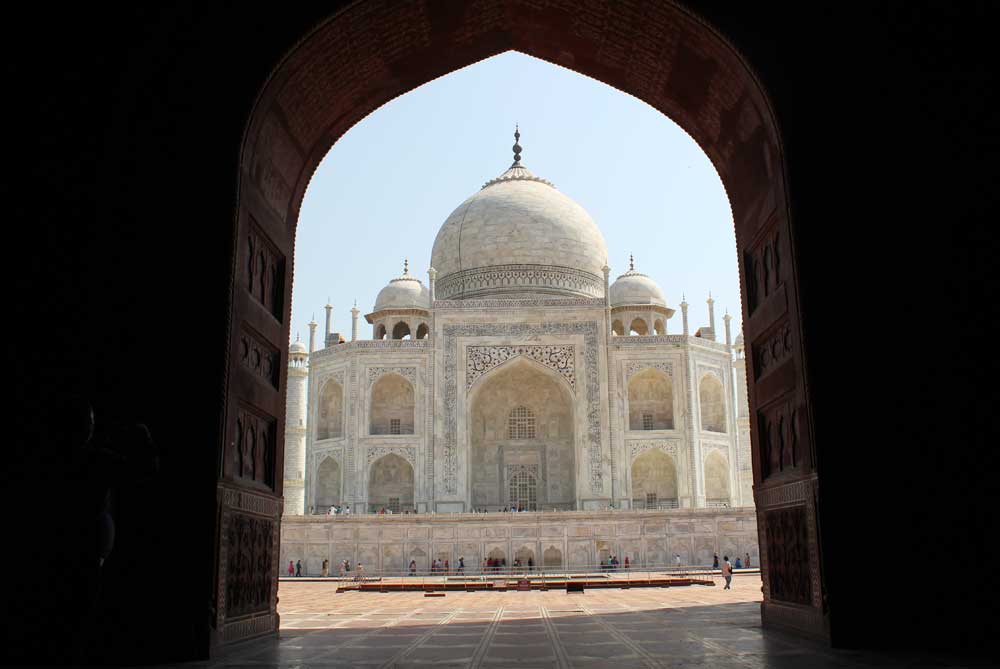 Inside the Taj Mahal are the two tombs of Shah Jahan and his favourite wife Mumtaz Mahal, however these are just replacements (the real ones are underneath). I was disgusted with the attitude of people visiting inside. People were being loud, pushing and shoving and even using their cameras when these were all not allowed. However I didn’t let this effect the experience.

The intricacy of decoration was outstanding around the Taj, and you could honestly walk around it all day. I’m not quite sure what the messages mean, but there was detail everywhere. 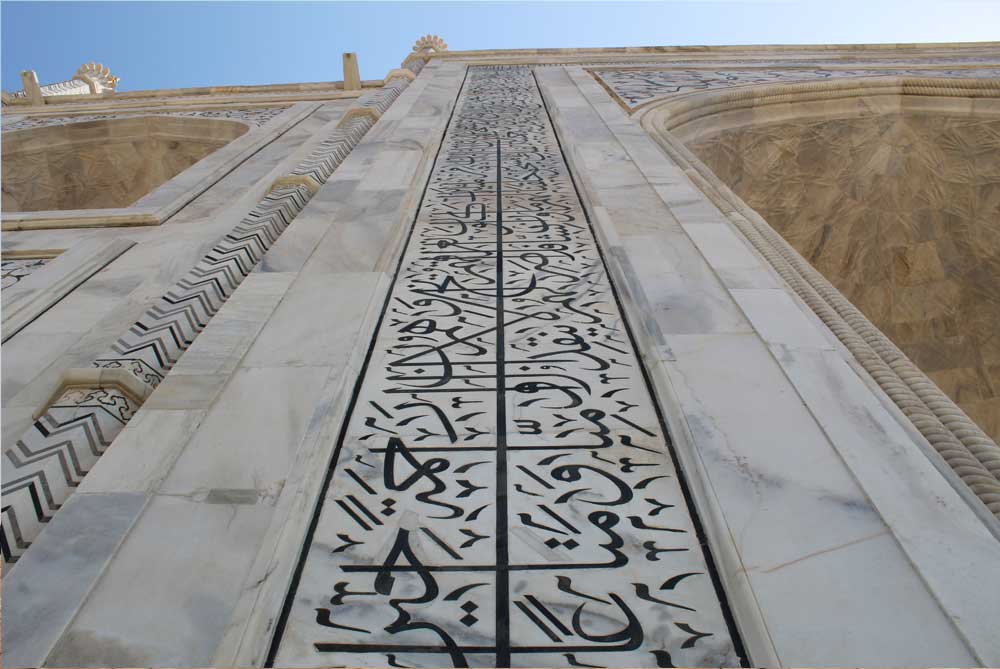 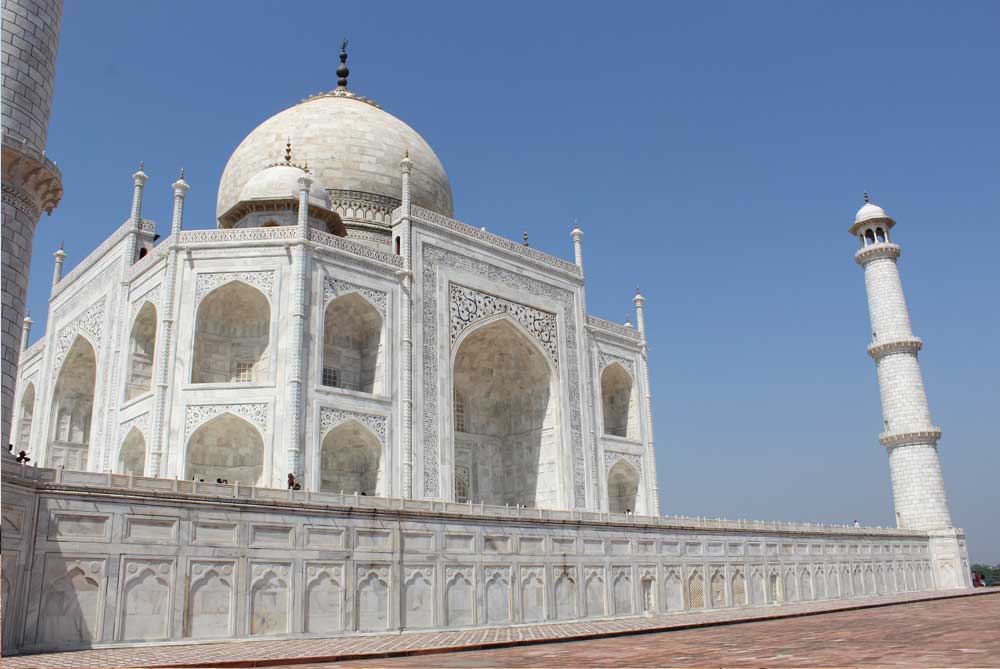 We left the grounds taking more photos along the way, however crowds were getting busier. Kelly got interrupted by around 15 school girls near the entrance all wanting selfies. I found it quite amusing and left her to it!

We were originally going to stay in this hotel for our stay in Agra, so thought it would be nice to still make a visit, and I’m so glad we did! The rooftop terrace gives great views across the Taj Mahal complex and is the perfect spot for lunch. It wasn’t busy at all and they have a shaded area. We’d definetely recommend if you fancy getting another view point of the Taj Mahal… Lets face it, you can never have enough! 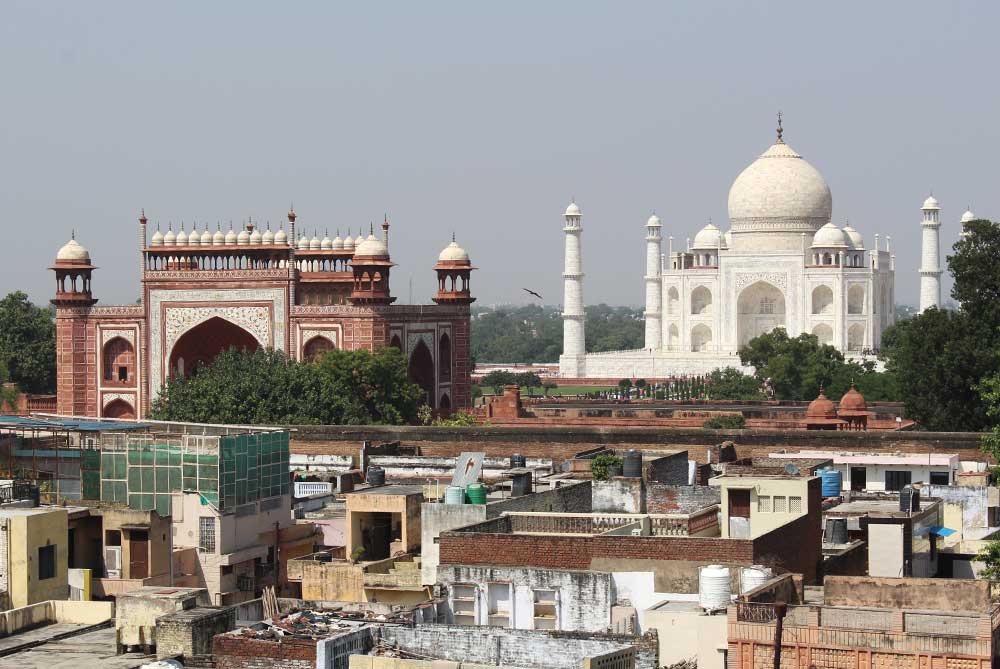 After exiting the restaurant we agreed a price of 200rs for a tuk tuk ride to Agra Fort, the FREE view of the Taj Mahal from across the river and a ride back to the train station. All in all this took just over an hour and was a worth while trip.

To take photos of Agra Fort the driver just pulled up at the side of a busy road. I was hoping for a better view, but this wasn’t the case. Still it was an experience ‘tuk tuking’ around the large walls of the fort.

This was actually a photo I took of the Fort from the Taj Mahal complex… You do get a pretty good view of Agra Fort and the river from behind the Taj, so take a longer distance lens if you have one. 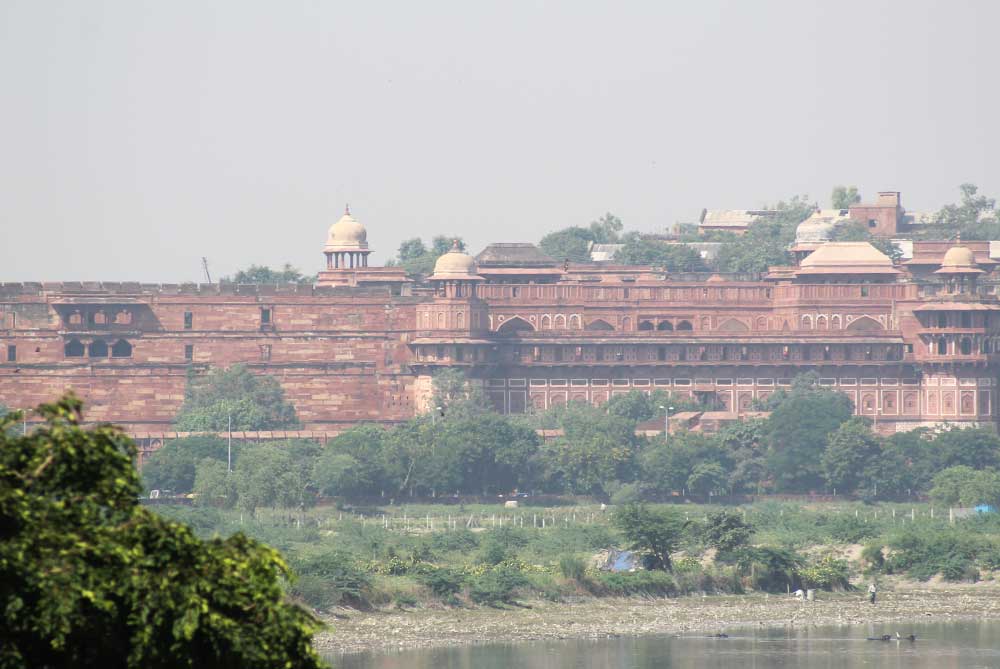 The FREE view of the Taj Mahal is a little out the way, but a great spot none the less to see the ‘dark side’ of the palace. There is also a garden next door called Mehtab Bagh, which will give you a more central looking spot. I think it was 200rs each to enter here so we gave it a miss. 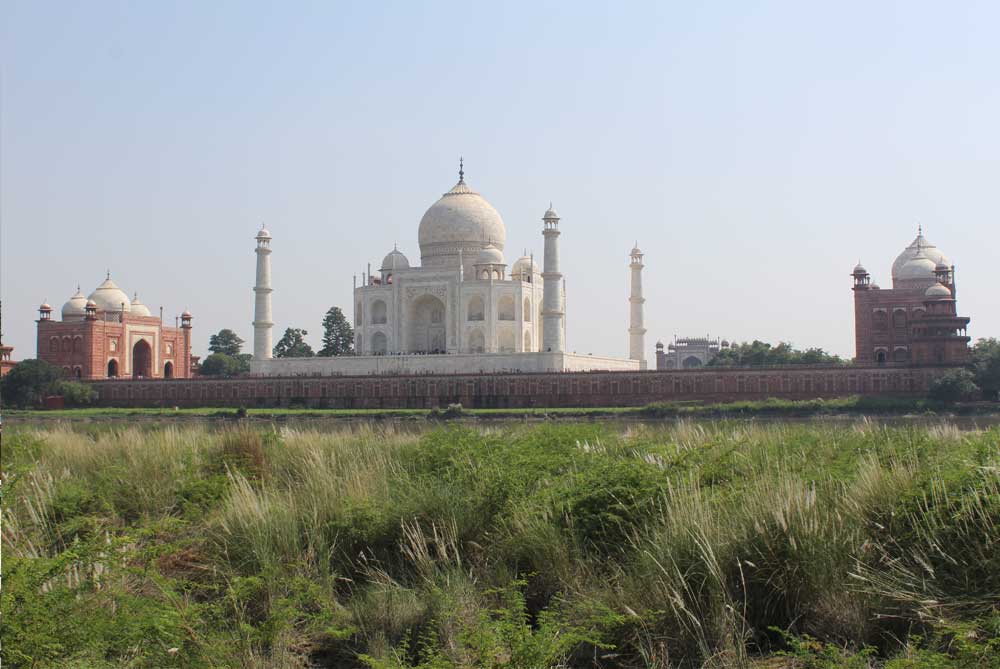 To top off probably our best day in India to date (for me), we spoilt ourselves to lounge access at Agra Cantt train station, costing 150rs each. We had an hour wait so it made perfect sense, and as Kelly doesn’t drink complimentary tea (or normal tea as a matter of fact!), it meant two for me! Win win.

Check out our short video on the beautiful Taj Mahal…