Where to stay in Chennai – Broadlands Hotel

We stayed at Broadlands Hotel which is located near Marina beach and within walking distance to most of the sights. For £2.50 each a night you can’t really moan, however this didn’t stop Kelly! The toilet facilities are outside in a few shacks, the water is cold and the place is a little dirty – but this is India. On the plus side the place was massive, it was dainty, the rooms are spacious and there is a nice view from the rooftop.

And look it’s quirky too, this was our control board (yep that’s only one plug socket)… 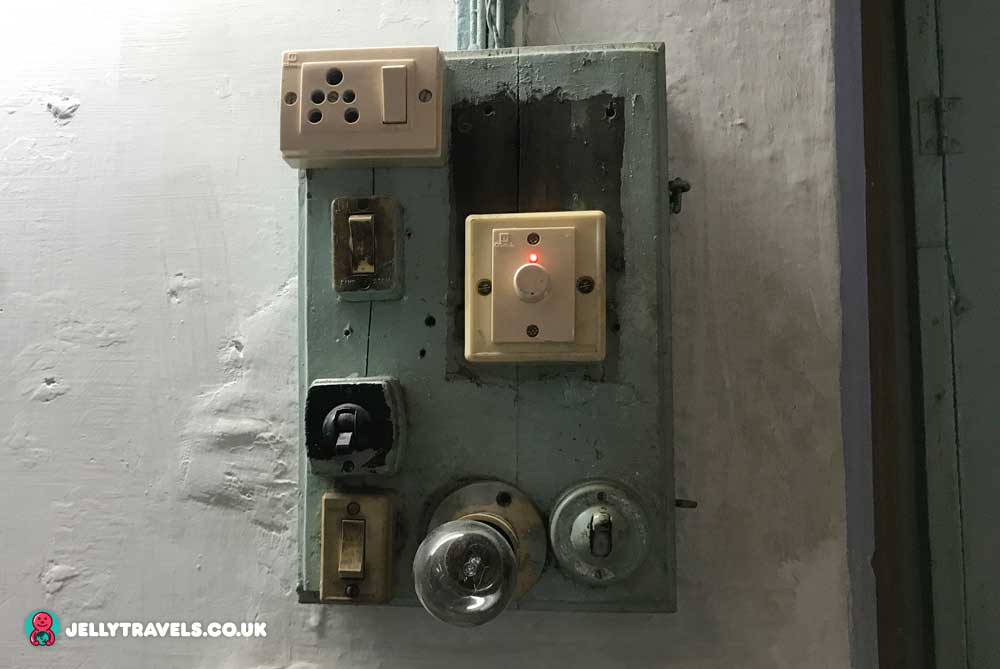 Our experience was spoilt slightly when the receptionist requested that we paid for our room again, even though we paid the full amount on arrival. This was frustrating, and of course we didn’t pay. Note to self – always get a receipt!

Getting Around Chennai – Ola

We used Ola the majority of the time, and used it to barter with tuk tuks. Apparently Ola doesn’t like the address of our hotel and pin dropped in the wrong place – we ended up being taken 10 minutes north of our hotel, so just be careful. In fact Ola wasn’t too great at all for us the further down South we went in India. So many cancellations and long waiting times. When in doubt just flag down a tuk tuk.

Places to Visit in Chennai

We didn’t actually visit this place, but I heard it many times from the toilet shack when they were announcing the call to prayer. Unfortunately I was toilet ridden for most of the trip in Chennai. 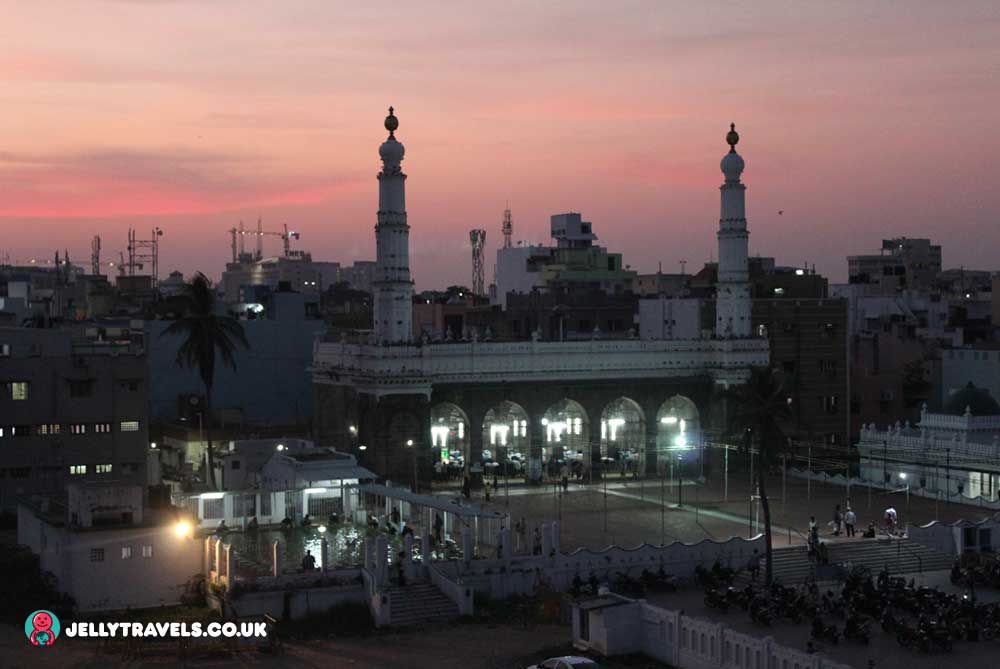 This was actually the first place we saw as we arrived and watched the sunset from the roof terrace which was pretty. I also woke up early one morning to watch sunrise and the morning ritual occur.

This temple was one of the main reasons we came to Chennai and it didn’t disappoint. We arrived on tuk tuk to be greeted by tons of stalls selling multi coloured ornaments. 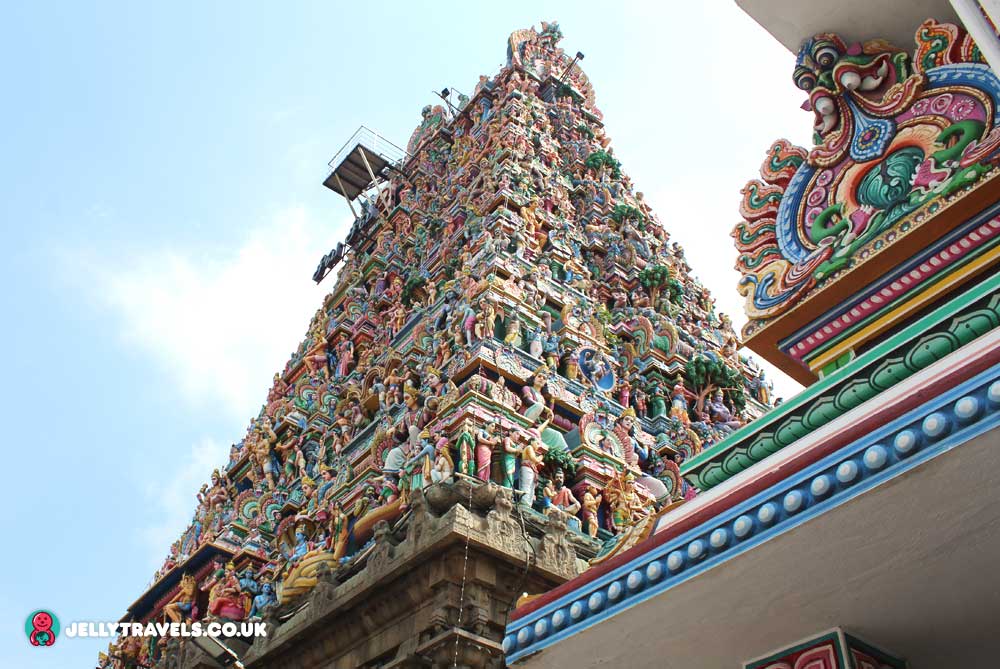 Entry to the temple was free, we just needed to remove our shoes. It was actually nice not to be hassled by people trying to make money out of tourism, but this became apparent because there actually weren’t that many tourists. We counted about 3 in the 45 minutes we spent here.

The temple was very vibrant, with coloured statues intricately making up the towers of the temple.

There was a priest and a gathering in the canopy area and everyone was cheerfully playing their instruments and singing. Unfortunately one of the 3 tourists was jumping around the gathering like a lunatic with her camera phone in hand. Some people hey! 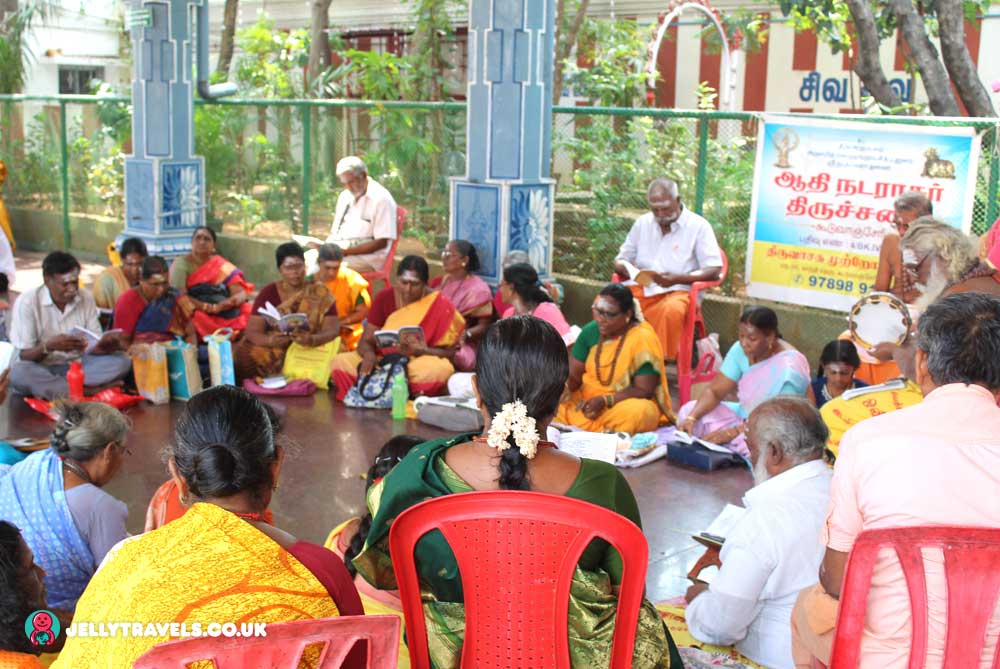 There was an area for worshippers only and a pen holding holy cows, where locals would circle and pay their respects.

An interesting temple to visit and something a little different to the temples were use to seeing in India.

As one of the places on TripAdvisor to visit we thought we would check this Christian church, but probably spent about 5 minutes here. From the outside the church looks stunning with its white gothic look. I walked indoors and sat down, to be handed a hym sheet ready for a starting ceremony. Kelly didn’t feel comfortable so we left. 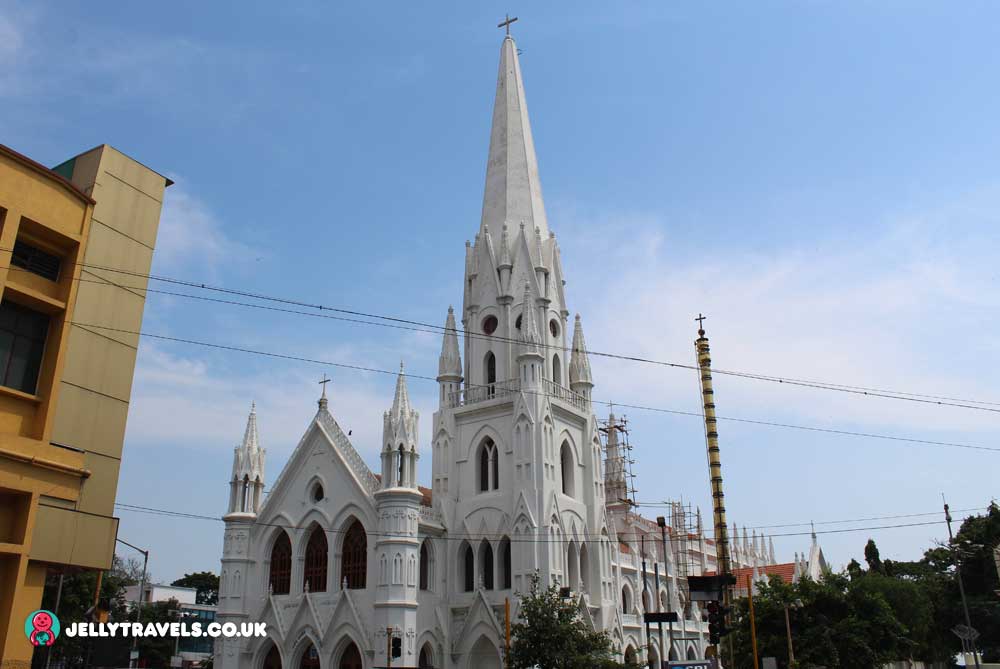 After coming from the beautiful beaches in Goa this beach just didn’t compare. We were actually hoping that we’d possibly chill on the beach as we had a few days here, but there was not one person sunbathing. The beach was covered in litter and people had actually set up their homes here. 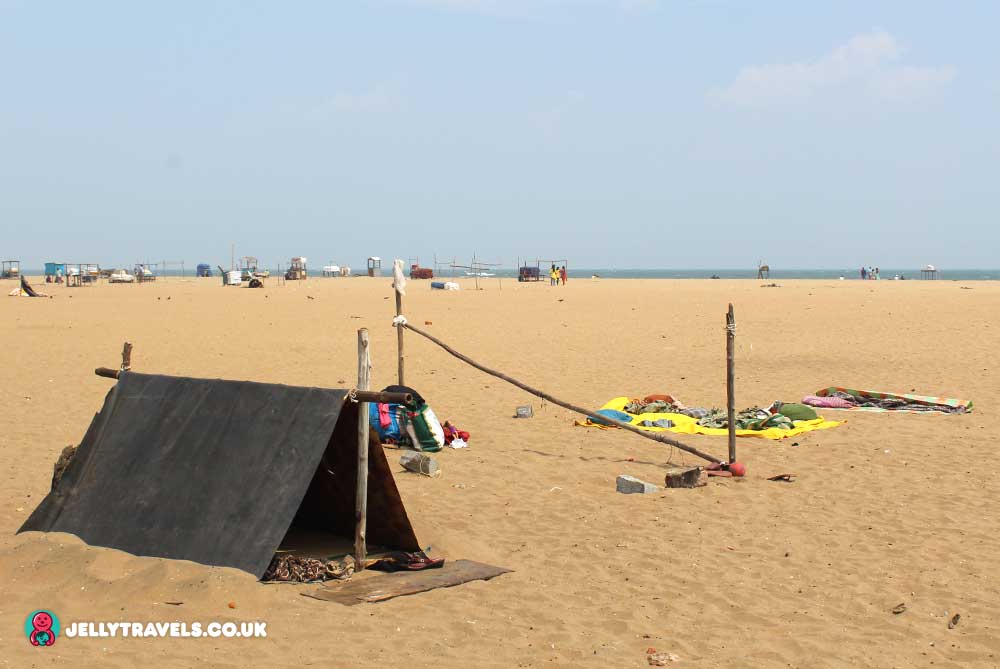 We then went in search for another beach and soon realised Chennai is definitely not the place for sunbathing, stick to Goa! Again the beach was dirty, however it was full of street stalls lined with signs selling sweetcorn and smiley faces! However the place seemed desolate and none of the stalls were actually open. 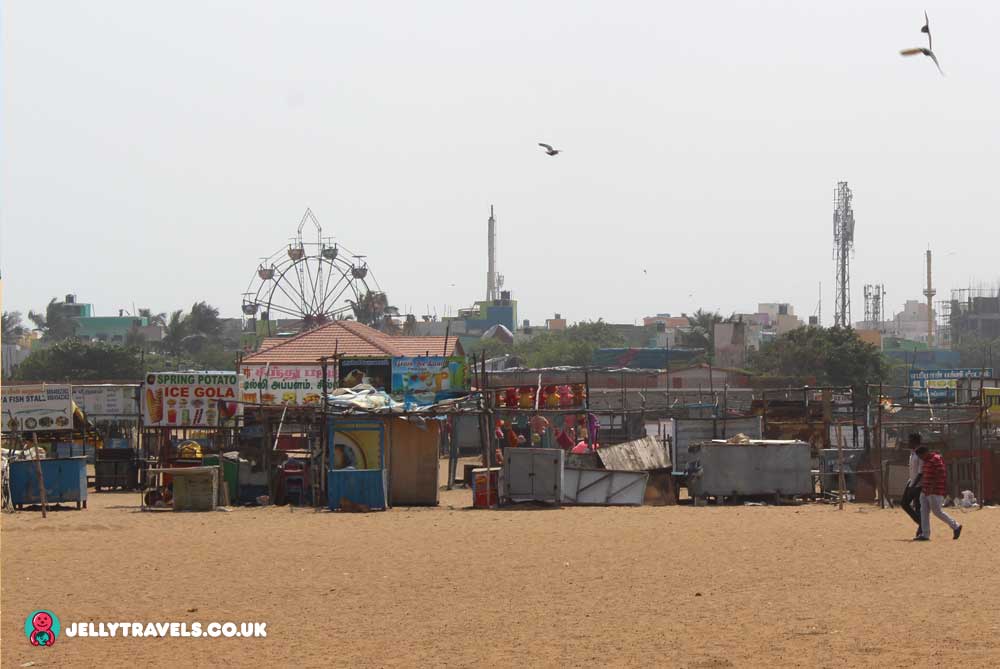 We grabbed an ice cream and had a play at the little fun fair that was on the beach. It was a chance for me to put my archery skills I had learnt recently in to practise. It actually worked and I managed to score two tens, to win a teddy. Kelly wasn’t too impressed with the toy so I ended up passing it to a young girl and her father who were over the moon.

We walked to Annai Velankanni Church from the beach to find out it had been knocked down for reconstruction. From here we passed through a small colourful little road full with kittens. I lost Kelly for a few minutes!

Also on the beach is a concrete memorial which has been defaced with graffitti…I’m really selling this place!

After paying tourist lead prices in Goa, we were back to the India prices we fell in love with in regards to food.

On our first night we ate in a local restaurant and paid 340rs (£3.50) for 2 meals and drinks. We even found a bakery and purchased choc cake and lime cheesecake for desert, setting us back 60rs (65p). The cake shops are wonderful here! 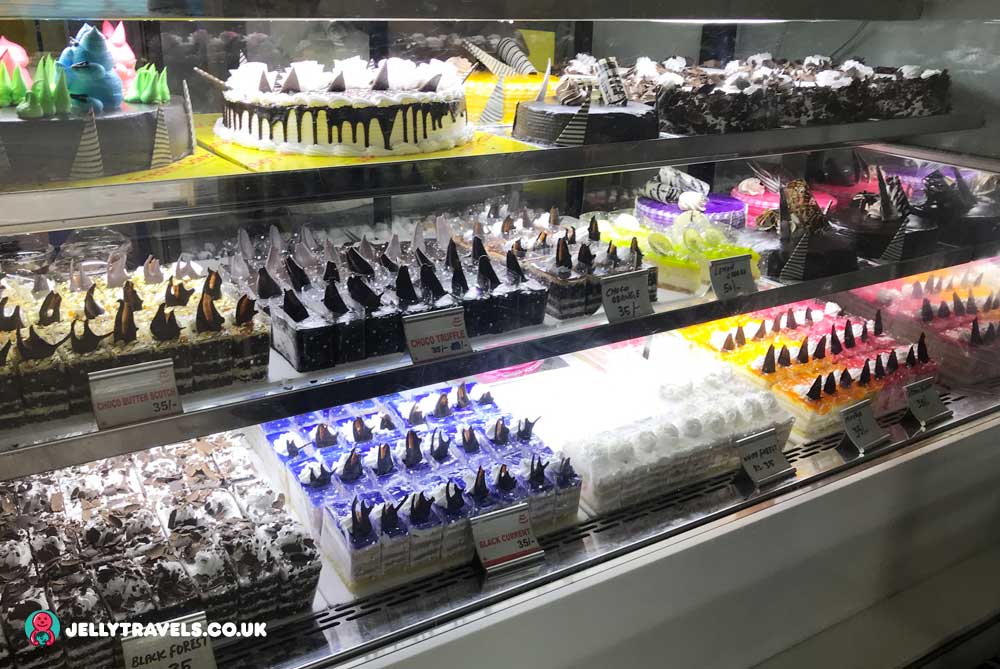 We then filled up on samosas, local food and one Dominoes on the remainder of our trip here.

Should I Visit Chennai?

We didn’t find too much to do in Chennai in all honesty. Apart from the Kapaleeswara Temple there doesn’t seem to be much to see. And even then, the temple in Madurai is much more interesting and larger. But still adding this place into our itinerary gave us something to compare to. It also allowed us to catch up on TV series and blog writing, all whilst eating/living cheaply and saving our budget.

Madurai was next, for our final stop in India.