Ok – so James decided to change the plan! Which those of you who know me, would realise how much this would unsettle me. He spent HOURS trying to find a way for us to do a day trip to Agra to see the Taj Mahal whilst we were still staying in Delhi, so we could forgo our stay in Agra to visit Varanasi instead.

I left him to it as he knew it was making me uncomfortable (but I’m certain I just came across as very unhelpful!) but he knows me well enough! Anyway, he planned it and just asked me for the go ahead and I could see how much he wanted to go so I gave in

The Journey from Delhi to Varanasi

Let’s start with the journey – we got an UBER to the airport (very cheap) and we were there in plenty on time! The frustrations started at trying to use an ATM – we were running out of cash and knew we would need it for when we landed. It kept declining our transactions and we didn’t understand why. We went to exchange points who would only take cash or charge a lot of commission for using card.

We gave up for the time being and went and checked our bags in. To our surprise, they were both overweight by a kg each. The reason we were surprised is that we were under the impression we had 23kg each not 15… turns out you only get 15kg if you book the flight within India?! So 1000 rupees later, we are checked in!

We get to our gate and start boarding and get going to the runway – there is an announcement that there is a report of someone being unwell and unable to take the flight so we needed to return to the terminal – our flight ended up being delayed by just over an hour. However, that was quickly remedied by a very nice veg wrap and muffin on the plane (free even though it was only a 1hr flight!).

We arrive at Varanasi airport and find an ATM that works… YAY (turns out that James was trying to use a card that had been blocked as he got the pin wrong previously). We look at pre paid Taxis to get to the Tree Baba Hostel and trying to barter down on the price. One agreed to 600 rupees but refused to give us a receipt for that price so we took our money back and looked at getting an ‘Ola’ (similar to UBER). We walked outside the airport and it was MADNESS – people screaming at you for your custom. We agreed to go with an Ola driver for 600 rupees until I saw someone holding James’ name up with a picture of us on his phone. Turns out the hostel had sent us a driver to pick us up as we had enquired about airport pick up. We advised that we only enquired – anyway, lots of shouting ensues between drivers and we finally agree to go with the hostel if the price is reduced to 600 rupees. Phew!!!

It was a fairly long drive with it getting very busy nearer the old centre. I took about an hour in the end. What we didn’t know was that cars cannot get to the hostel, so we were confused when we were asked to leave the car and there was a very odd looking man waiting for us who offered to carry my bag (which no joke, was almost as big as him). He walked very quickly through traffic, people and narrow streets, that we struggled to keep up. Varanasi was already looking rather old, seemed run down due to the amounts of rubble everywhere and very religious due to the Hindi motifs on every corner and those in traditional dress. 10 minutes later we arrive at the hostel – I will also attribute blame to James as he booked it!

Ok, good thing was, this place was in a great location to the Ghats. It even had a rooftop that overlooked the Ganges and the main cremation Ghat. The hosts (father and son) were very welcoming and full of information. The father made us aware that the government wanted to demolish the Old City to rebuild a new one so was unsure how much longer his building would be there. The son offered us a walking tour and a boat tour and offered advice around keeping safe. Also gave us his number and said if we had any issues he would get to us in 5 minutes. However, the room did not look as advertised on booking.com (although what should I expect for £12 for 2 nights). It was very basic – 2 hard single beds together, a ceiling fan, a lightbulb and one plug socket. It seemed fairly clean but we were both bitten on both nights. The bathroom (if you can call it that) was barely big enough for one person. It was very dim with one light, smelt awful and we kept having to fill up the toilet with a bucket of dripping water from the shower so it would flush. The shower didn’t always produce water and when it did it was cold and we even had to pay for the privilege of toilet paper! Really not what I was hoping for our first private room in nearly 2 weeks!

We were recommended this vegetarian restaurant by the son of the hostel. It was about a 5 minute walk away. We went in, and there were only about 4 tables but a big menu with multiple cuisines. I was boring and had a veg chow mein, which was actually so good and just what I wanted – noodles and veg! James chose a Veg Thani which consisted of veg curry, potatoes, veg, rice, poppadum and chappati/naan – it looked and tasted great too. With drinks it cost around £4! We actually came back here the following evening for dinner, as it was a safe bet. 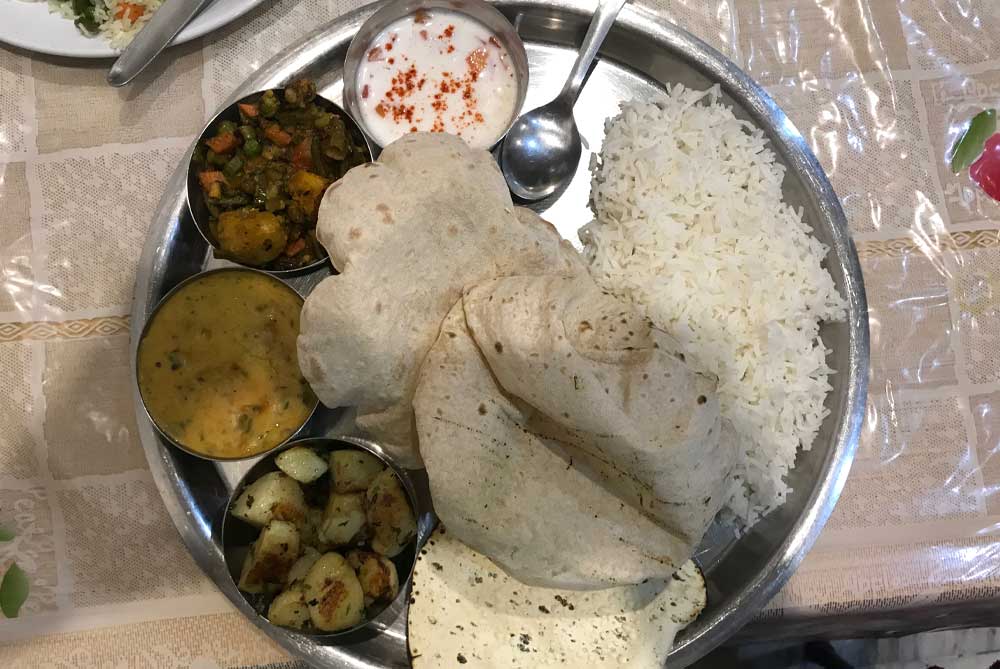 We walked back to the hostel in the dark, which was a little daunting, watching out for cows (and cow pats – I wasn’t always successful here!) and dogs as well as numerous people and mopeds getting through the tight streets. We popped a film on after a long day, I was asleep way before it ended!

As I was trying to settle down for the night in my less than luxurious room, James jumped out of his skin at the sight of a gecko in our room. Now, I have no issue with little gecko’s but I did understand James point of not wanting to wake up with it on me! We tried to work out how to get rid of it, but it ended up scuttling out to the common area through a gap in the door.

There was a little paranoia following this and frequent shining of phone lights around the room (mostly by James, but I benefitted from the comfort of this)! This was also when we discovered that the shower water doesn’t always work/run and the toilet also stops flushing due to lack of water (great!). As I said, I fell asleep quickly, but we were both awakened at 2.30am by banging and crashing from people demolishing the building next door (although it sounded like someone was trying to bash their way into our room)! As you can imagine, this was quite scary to begin with, and then we had to try and get back to sleep with the racket!

James decided to get up at 6am so he could see the sunrise from the rooftop, so fairly tiring morning for the both of us! He said it was well worth getting up for, as he watched monkeys scale the buildings, but this didn’t really phase me. 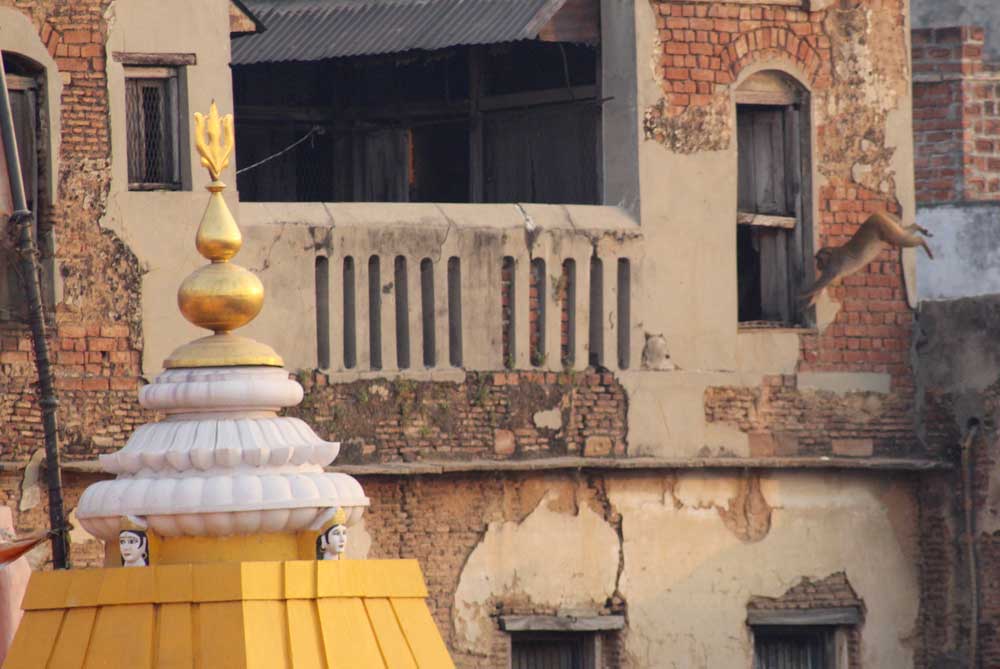 This was the main temple that James wanted to see. We ventured out knowing it was only a short walk away to find the street flooded with hundreds of locals in a long queue waiting patiently with offerings. We shortly discovered that this queue was for the entrance of the temple. We walked around to find another viewpoint, but every entrance had queues and queues of people, and we could not view it from outside. We spoke to a guard who stated ‘no photos’ so we decided not to intrude and leave the viewing of the temple. I was quite grateful for this due to not wanting to queue, and this temple being so important to so many people’s religion, I wouldn’t want to insult them as a tourist!

We later found out that it depends how the guards are feeling on the day, as to whether they will let tourists in or not.

We walked a length of the Ganges, passing numerous Ghats. We were offered a boat ride at every opportunity. We were able to view people bathing in the river, washing their clothes in the river. It was very peaceful and serene. It actually felt nice for once not to be asked for selfies every 5 minutes – but I spoke too soon. As soon as we sat down a few people came over for pictures and even a video chat!

We got chatting to Moon (not his real name, I’m sure!), who wanted to offer a row boat ride. We took him up on his offer for 500 rupees and two other Indian tourists joined us (although James was convinced there commissioned to sell us silk afterwards). He was very chatty and entertaining and rowed for 30 minutes offering information on the Ghats we passed. He also pointed out a dead body floating in the water, which wasn’t a great sight. He also took some pictures of all of us – a few James agreed to send to our new Indian friends on Whatsapp! 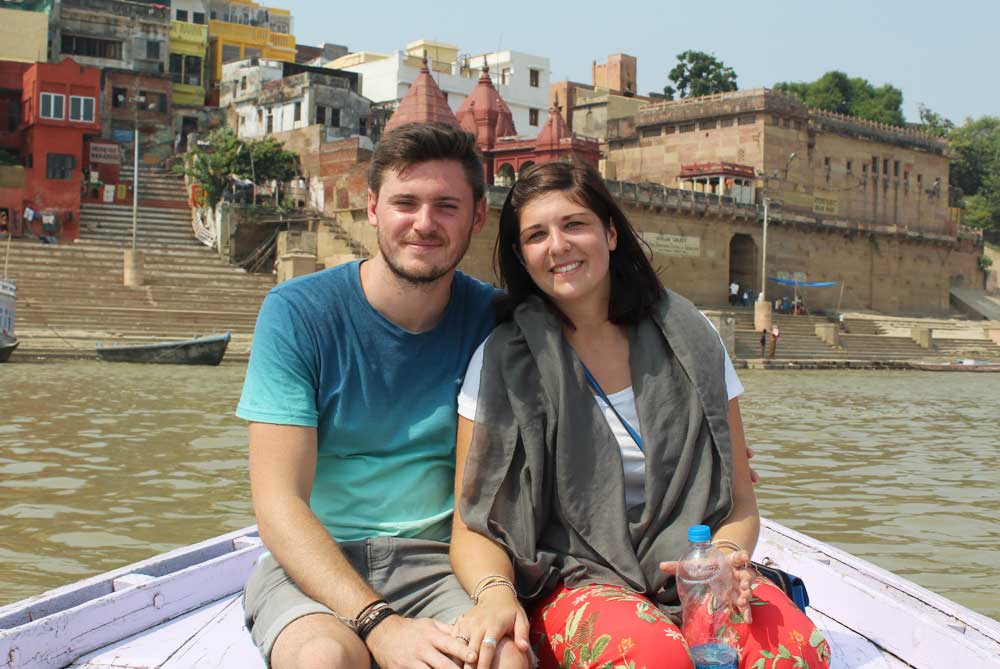 We ventured out again in the evening especially for the Aarti Ceremony at Dashashwamedh Ghat, a 5 minute walk away. I became a little overwhelmed due to the copious amount of people in attendance, even though these rituals are every evening, rain or shine! There was music, light and atmosphere. There were locals moving around the crowd to paint foreheads but we politely refused as we were unsure of the meaning and didn’t want to insult.

Male performers stood in golden decorative robes towards The Ganges and slowly and rhythmically moved with incense sticks, petals, fans, candles and bells. I am glad to have experienced it, even though the floods of people made me nervous!

Sunrise on The Ganges for James

The second night there were no loud disruptions in the night, but James once again needed to explore further and left me sleeping at 5.30 to witness the sunrise over The Ganges. He stated the sunrise wasn’t too spectacular as it was rather dusky but he did manage another early morning boat trip for 100 rupees, which was the Indian price and he was asked to keep quiet to the two other tourists on the boat. Bartering really does work in India. And this time James’ boat trip lasted 90 minutes with views of locals going about their morning routines at the Ghats and across the bank of the Ganges. 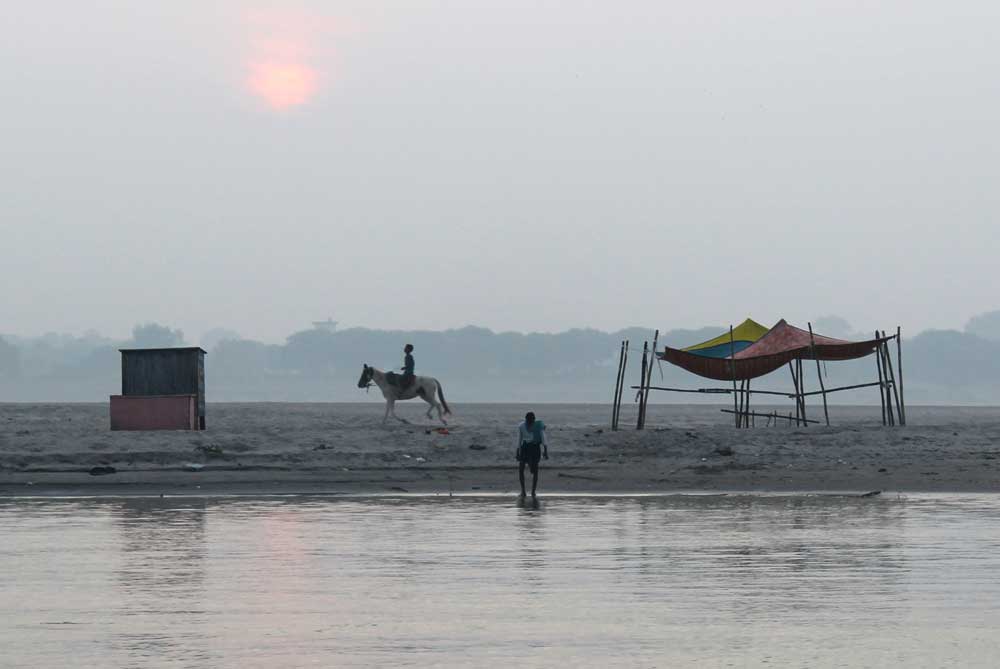 He also witnessed the start of a cremation at Manikarnika Ghat. 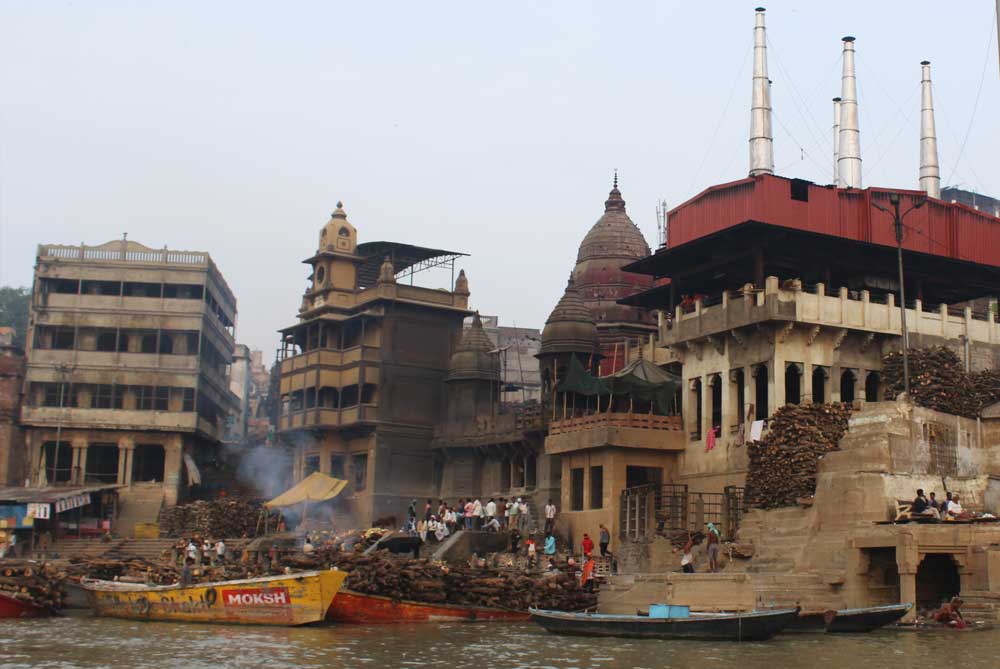 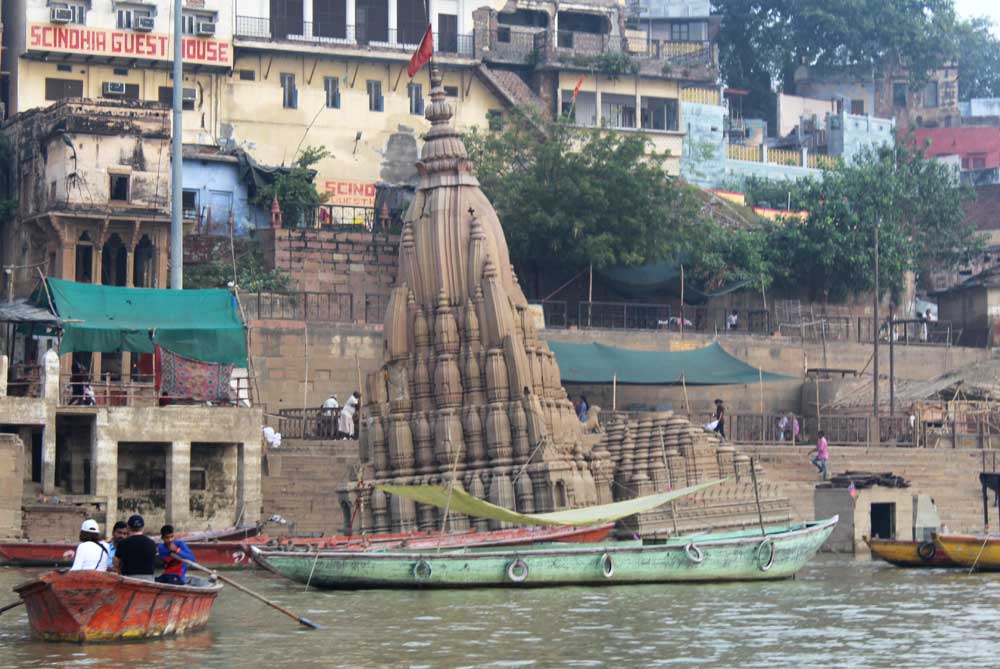 All in all, I am glad we visited Varanasi and experienced the history and culture. I am also glad we were only there for a short time, as it was a little bit of a shock to the system!