I feel like I am getting quite comfortable with India now – I am enjoying it a lot more than I expected and it is a lot more modern (in places) than I thought also. I am even getting used to the whole hostel thing – quite proud of myself actually! So when we arrived at Jaipur airport I was feeling quite calm (that may be something to do with the fact that I was glad to be out of Varanasi) and enjoying the Ola to the hostel viewing many pretty pink and orange buildings going into the city. The Indian driving doesn’t even seem to phase me now! What has happened to me?!

So, after Varanasi, arriving here was like a dream! Big, clean hostel with funky and bright colours. The common room was really big and comfy and fairly social. The kitchen area was also very large. We had a dorm of 4 which was lovely – with 2 toilets and 2 showers external to the room which seemed to be free the majority of the time. The hostel offered activities both during the day and evening (most at a fee) but unfortunately, I don’t think many of these were heavily attended. Alcohol was not allowed at the hostel (alcohol restrictions in Rajasthan without correct licence), but some of the activities included nights out in bars. Would definitely recommend this hostel for a place to stay in Jaipur.

Just a 5 minute walk from Zostel are some of the main attractions of Jaipur – Hawa Mahal. We stopped and took pictures from the outside, and continued to walk round so we could go inside. It was 200 rupees each. It was really nice to explore the different levels, hidden corners and see the colourful glass windows up close. There is a fairly good view from the top too looking at the mountains in the distance! A bit later on, we went to a rooftop café (Wind Cafe) opposite to take more pictures and enjoy a cold soft drink.

We actually returned to Hawa Mahal another evening to take photographs of it lit up. Another picture worthy moment! Definitely worth a see! 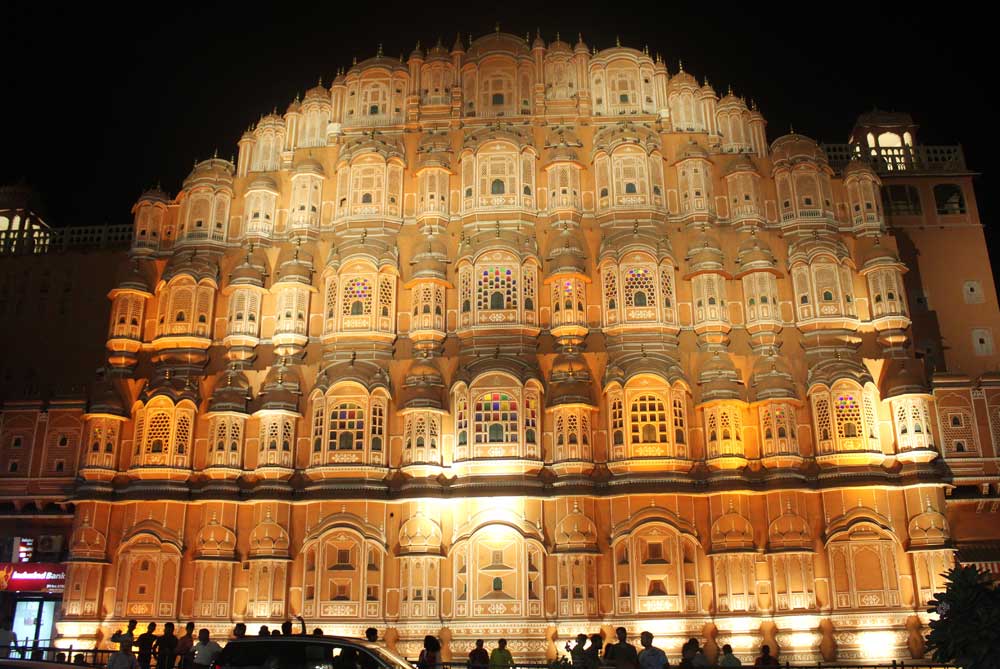 City Palace was next on the ‘to see’ list. It was only another 5 minute walk from Hawa Mahal. It cost 500 rupees each to go in. There was lots to see and read about – 3 different verandas, museums, art, bazaars and photography, as well as the main hall. It was interesting and we got some lovely photos, but for me it didn’t have a wow factor compared to some of the places we had seen in Delhi. Someone asked us when we left whether it was worth 500 rupees – our response was “there was lots to see, but it was nothing spectacular” which I think sums it up. 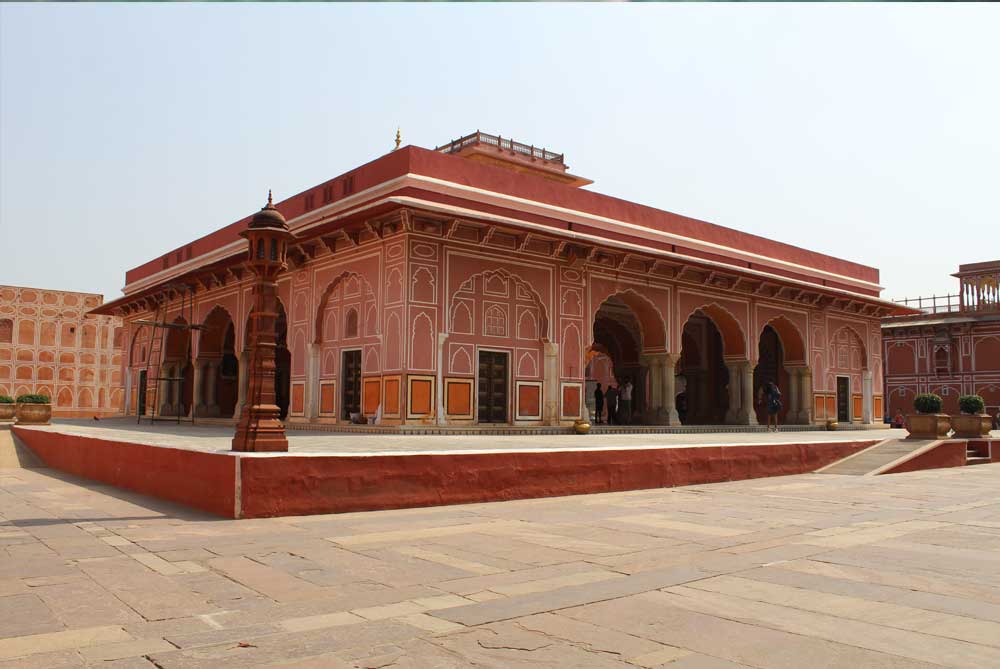 Another short walk from the Palace was Jantar Mantar. James was really keen to see this, as we skipped the one in Delhi. When we walked in (200 rupees each) we had no idea what we were looking at! After a little reading of the descriptions at each build, we discovered it was all a form of astronomy equipment. We found ourselves reading about each piece, but I will be honest, I still didn’t really understand! I would recommend getting a guide (the are at a set government approved price in Jaipur) to talk you through Jantar Mantar. Still an interesting visit! 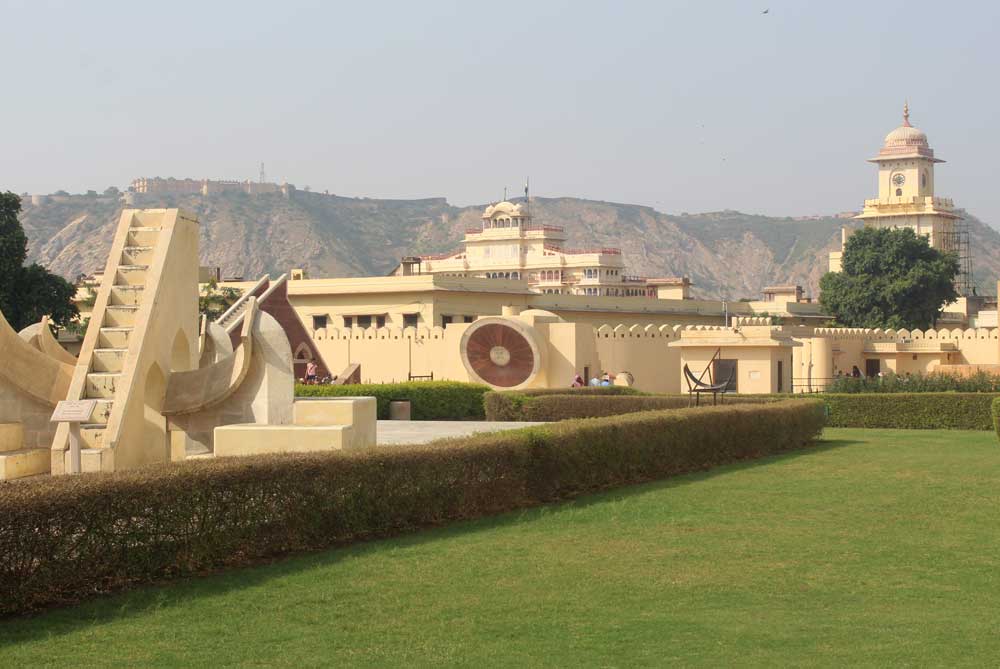 Ok, so I personally thought this was very over rated. It is supposed to be one of the top things to see in Jaipur – a palace in water. You cannot go to the building (I think this is reserved only for very important people!) you can only take photos from the bank/side of the road. For a quick stop off, it is worth doing for a few quick snaps, but similarly to the city palace, I was not bowled over! 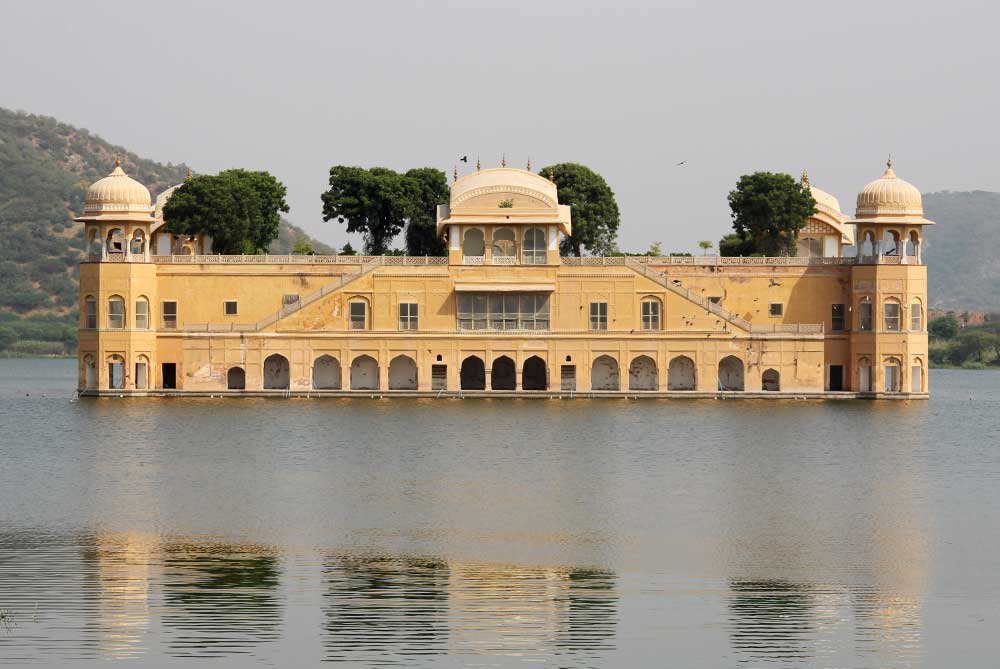 James was mixing up lenses to get snaps of the Palace close up and the stork bathing in the water. These two local boys also really wanted a photo so starting posing for him. They were charming! 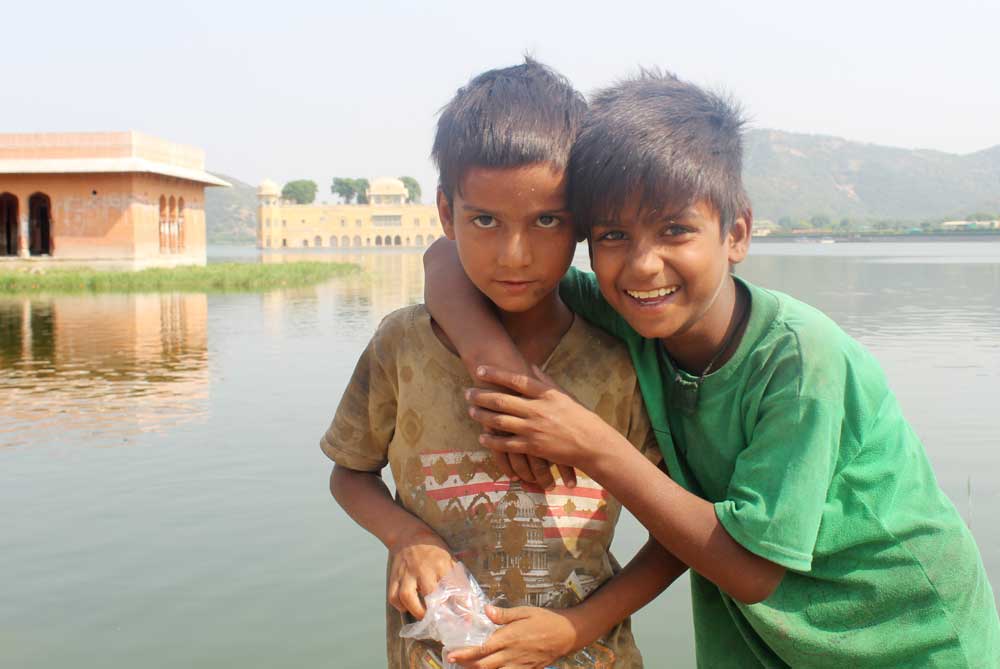 Although it did give us a moment to experience a slow moving vehicle with loud speakers playing music with locals dancing behind! Like a party bus! Everyone was happy and even made performances for James’ video recording. It was a Saturday and we had no idea if it was a regular thing or a special day but it was enjoyable to see! We kept hearing snippets of loud music throughout the day!

We were dropped of by Tuk Tuk to the fort. He kept talking about elephant rides (we didn’t see any) to the entrance but we were not interested.

The entrance to the fort was not clear so we walked around the front gardens until we had to ask – turns out it was back where we entered the garden (to the left of the fort) and you just have to keep walking up steep cobbled ramps and steps – not for the feint hearted guys! You can imagine my attitude when the incline didn’t seem to ease! 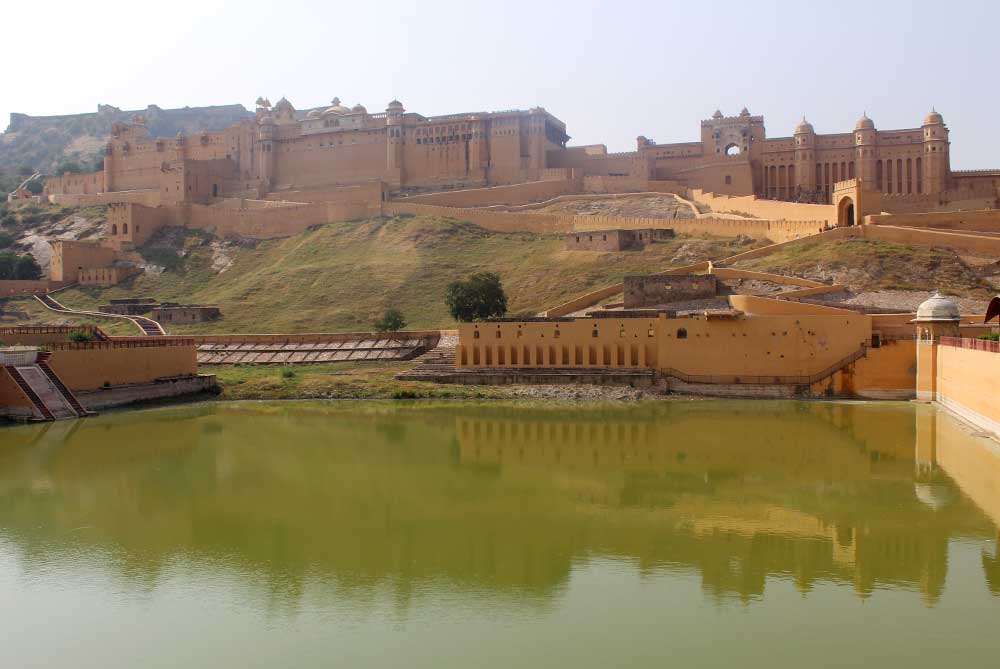 We walked into a veranda area with a food area where people were sitting down with their shoes on the ground. We found out later from our hostel roommate that they were offering free meals (we think it was part of some sort of ceremony) – but you needed to finish it as they couldn’t waste food.

We walked up more steps to get to the ticket office and paid 500 rupees each to enter. We asked about the sound and light show for that evening and we were advised it wasn’t until 8.30pm and we needed to get tickets from inside the fort. We did ask inside the fort and we were told we would need to purchase them at the gate of the gardens before the show starts (lots of mixed messages).

The fort/palace itself you can walk around for hours – lots of little passageways, corridors and hideaways! This was quite amusing for me and James – hiding from each other, jumping in each others photos! There were a few pretty buildings and archways to see inside, and lots of people asking us for selfies!

When we left, there were bazaars and stalls offering paintings, photos, art etc. We were able to grab a painting we had had our eye on for 200 rupees, where everywhere else it had been 1500! Bargain! As we walked back down from the fort at 5pm, we noticed a lot of people (Hindi) walking up to the fort even though as far as we were aware it was due to close – unsure what that was about.

However, I was fascinated by the size of Poppadum’s (Huge!) selling for 10 rupees down the hill – wish I had one now!

We decided against the light show (so still none the wiser about tickets!) due to the length of time we would need to wait around (or pay to get back), and the reviews online weren’t great. So can’t comment on that!

The fort was a fun afternoon trip with really good views of the other 2 forts in Jaipur (we didn’t managed these) – just expect lots of steps and walking! 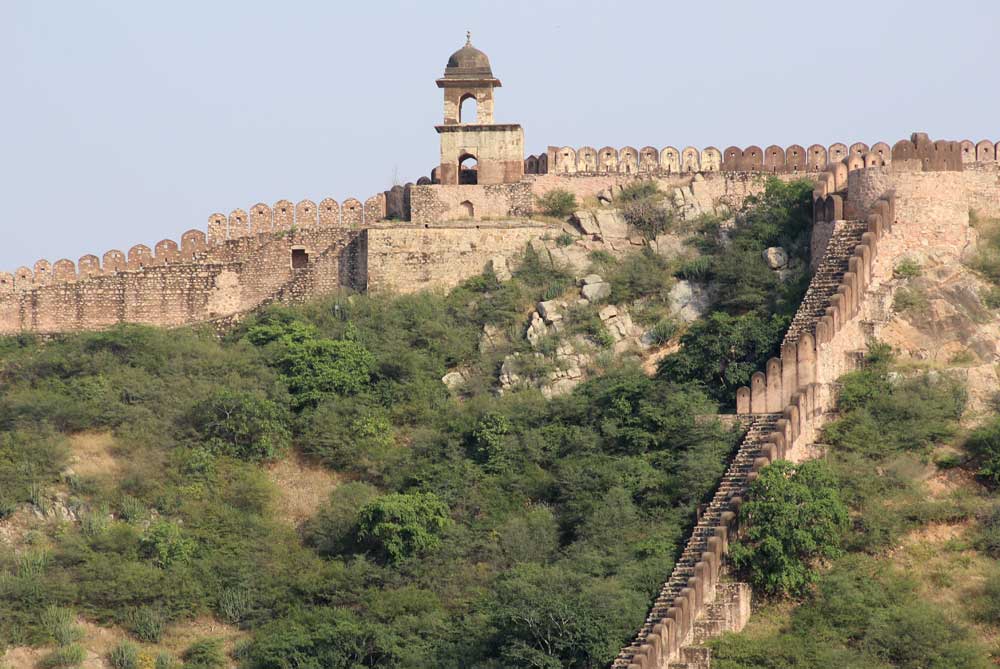 We bartered with Tuk Tuk drivers to take us to the Monkey temple before it closed at 6.30. It took about 20 minutes from Amer Fort. When we arrived, people were surrounding the tuk tuk telling us to buy monkey nuts as it is polite to feed the monkeys. We agreed and paid 50 rupees for 1 bag, even though they tried their hardest to sell us 2! 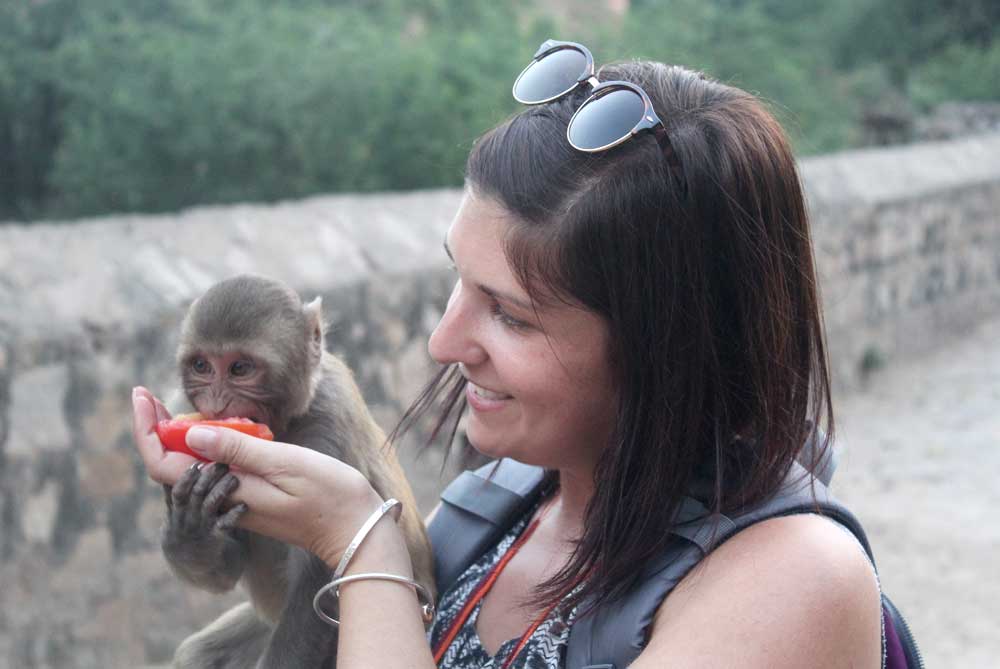 A young man named Shubba walked with us to the temple (we did not ask him too) and showed us how to feed the monkeys with nuts and tomatoes. Monkeys were waiting as soon as we arrived and started lining up along the walls. It took 15 minutes up and downhill to reach the temple and we fed monkeys along the way (cute). We even saw a very freakishly looking 6 legged cow – apparently extra holy! We reached the temple and paid 50 rupees for a photography fee. Another male joined us and helped us get good shots of monkeys eating out of our hands, jumping on our shoulders etc.

Shubba even took photos for us with James’ professional camera (although 95% were blurry). When we were finished, we wanted to take a few photos of the surrounding temples, so Shubba expected (and asked) James to pay the other guy for his help. James handed 30 rupees, which the guy didn’t seem best pleased about, but he had literally spent 10 minutes putting nuts in our hands. 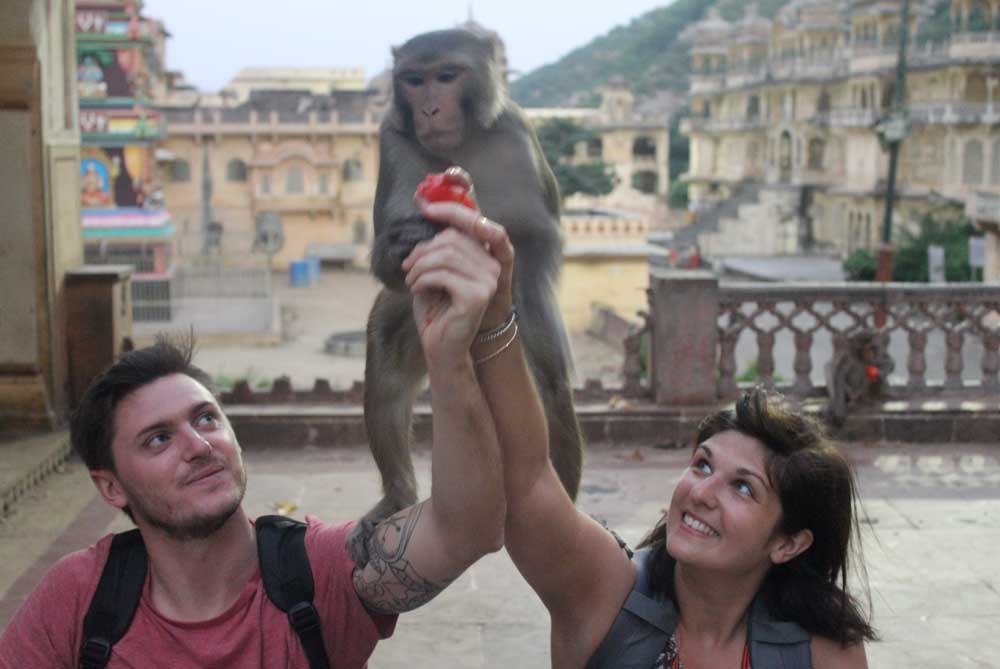 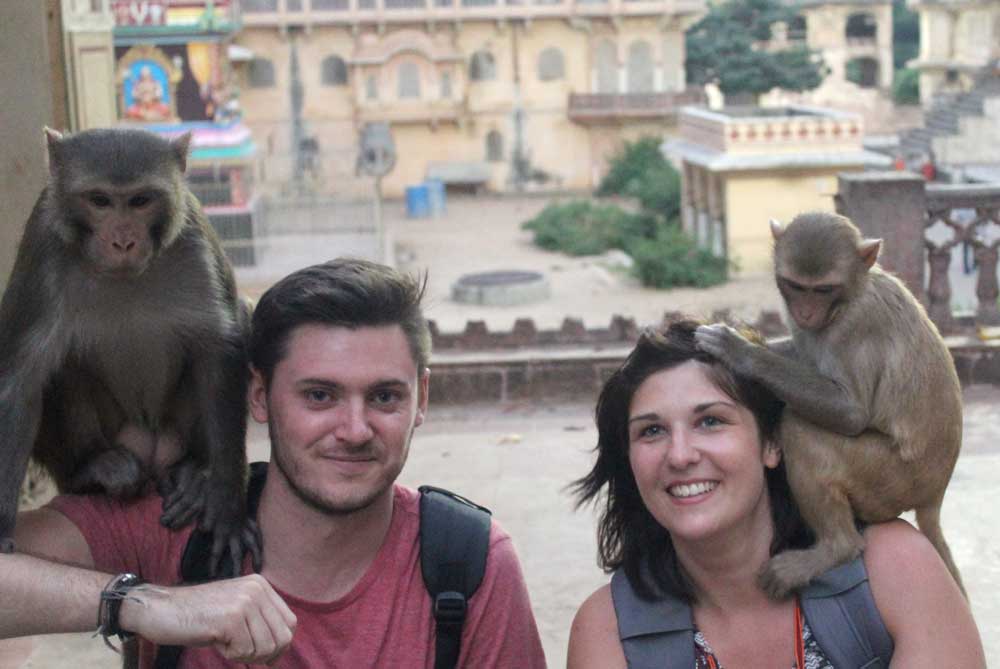 We had the monkeys climbing and jumping all over us for about 20 minutes, with our heads being touched my all sorts of monkey places. It was however drawing dark and we were kinda out in the sticks.

We walked back (so much up hill!) stinking of sweat, tomato and monkey – it had got really dark. We were able to get some pretty shots of the city lit up from the top of the hill. Before we even reached the bottom Shubba asked for money for his services.

I will point out that James was willing to offer a tip anyway, even though it seemed we had no choice in him accompanying us, and he had mentioned nothing about charging us prior to taking us to the temple – although we aren’t naive, we were expecting him to ask for money.

James offered 200 rupees for both of us which seemed fair (due to reasons above) and Shubba argued that his normal rate is 450 per person. James stayed strong and stated no, 200 rupees was all we had. James eventually gave him 220, but it put a bit of a downer on the experience as the friendliness of our ‘host’ seemed to change to frustration and aggression over money for the last 10 minutes. But this is the reason James has money control – his bartering skills and strength is now second to none after being in India for 3 weeks! 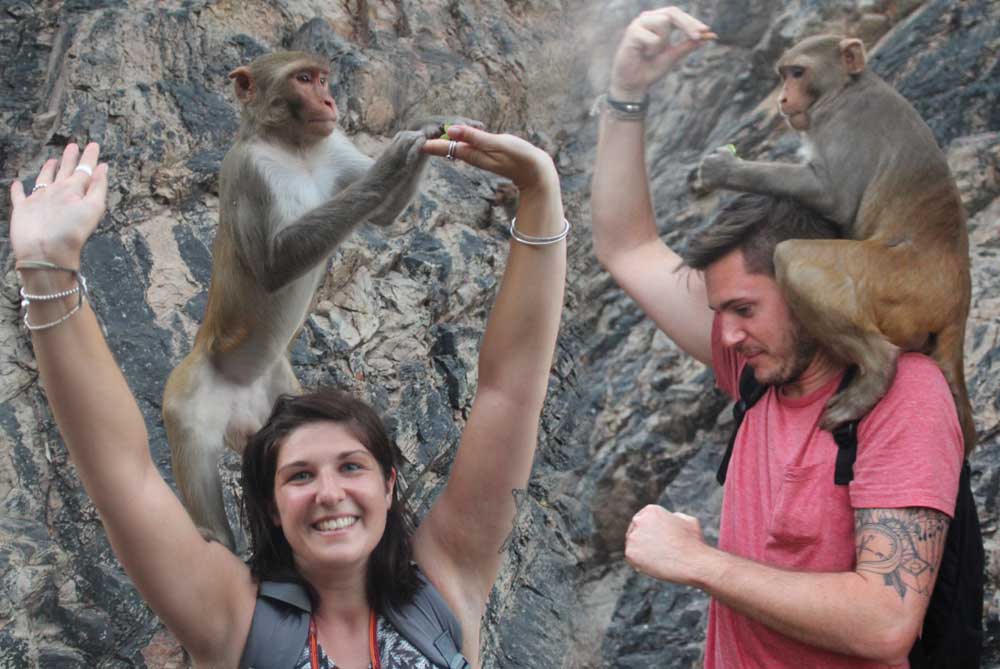 All in all, the monkey temple was a lot of fun for us, and we have some great photos to show for it, but be aware of people approaching you as soon as you get there (but yes buy the monkey nuts!) and make sure it is last on the agenda so you can go back to your accommodation and shower – you don’t want that smell lingering around all day! 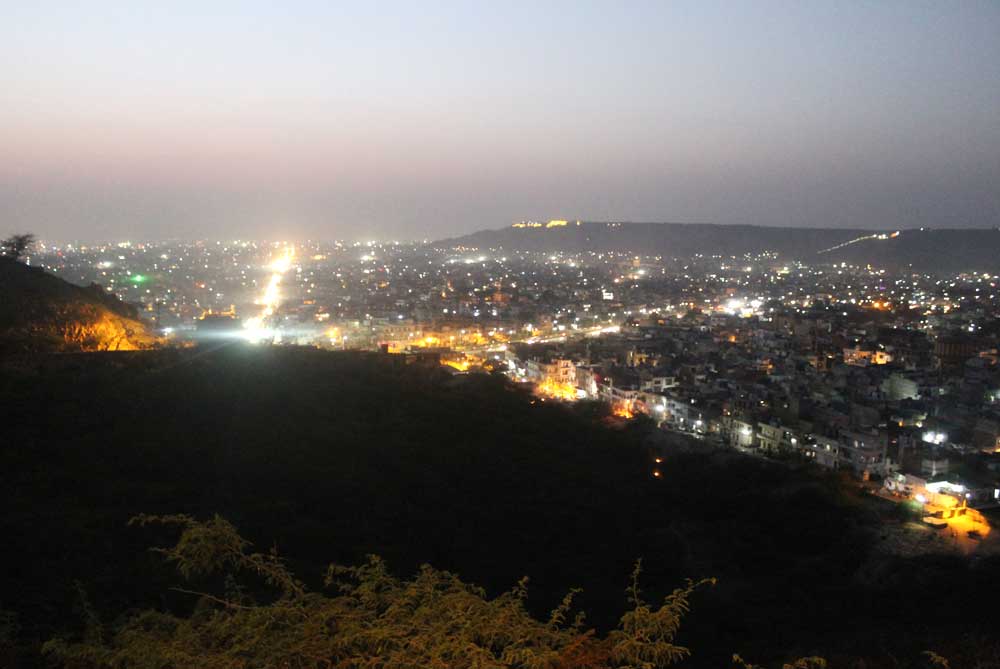 Just a little tip – there seems to be a lack of supermarkets, convenience stores in India, even though there is an abundance of street stalls. However, we did find a small one about a 10 minute walk from out hostel called Reliance Fresh. Had everything you needed (I needed shampoo) from snacks to toiletries. However, we have found that ordering food in (UberEats, Zomato) is probably cheaper than shopping and cooking!

I really enjoyed our short stay in Jaipur – it seemed a little more sophisticated than Delhi with a little more charm due to the pink/orange buildings. We probably could have fit a little more in, but I am enjoying travelling at a leisurely pace!

Check out our Jaipur video!